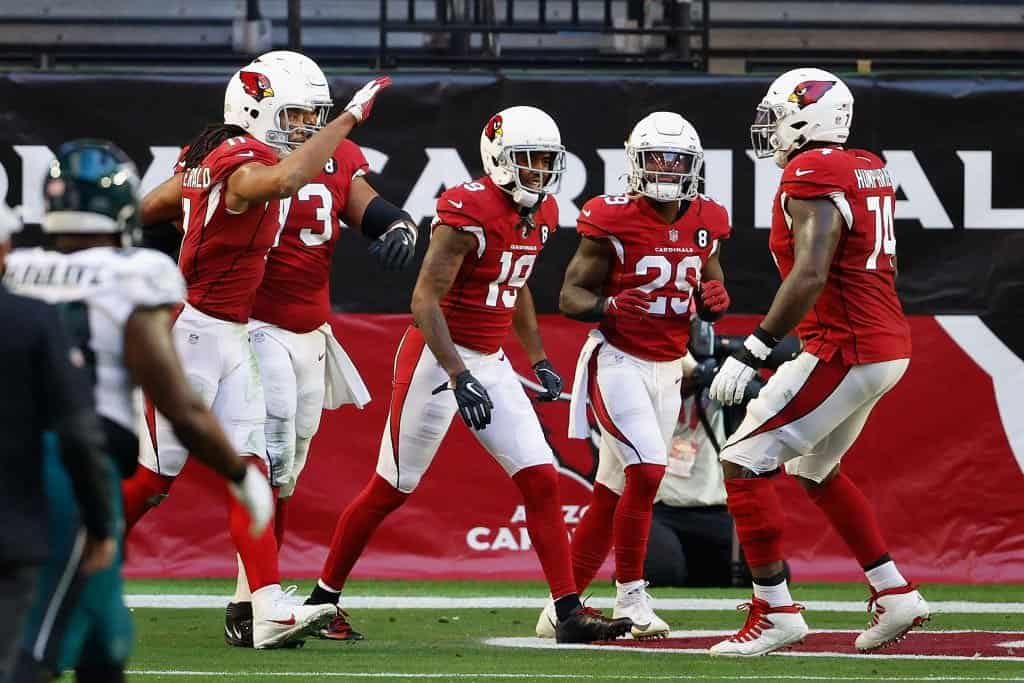 GLENDALE, ARIZONA - DECEMBER 20: Wide receiver Larry Fitzgerald #11 of the Arizona Cardinals celebrates with Max Garcia #73, KeeSean Johnson #19, Chase Edmonds and D.J. Humphries #74 after a 14-yard touchdown reception against the Philadelphia Eagles during the NFL game at State Farm Stadium on December 20, 2020 in Glendale, Arizona. The Cardinals defeated the Eagles 33-26. (Photo by Christian Petersen/Getty Images)
What's in this article? Click to show
The Cardinals project to be around $9.4 million under the salary cap in 2021
Arizona has a handful of potential options to release players
The Cardinals have few options for players they can restructure to create 2021 cap space
Want more NFL news and analysis?

The Cardinals project to be around $9.4 million under the salary cap in 2021

As it stands, the Cardinals have just over $176.0 million in commitments to their top 51 highest-paid players, with an additional $4.6 million in dead money. Therefore, the Cardinals are currently around $9.4 million over the salary cap heading into 2021.

Arizona has a handful of potential options to release players

After signing J.J. Watt, the Cardinals now need to consider making salary cap moves heading into the 2021 league year. However, if they are looking to make any more drastic improvements in free agency, they could release a few players in the coming weeks.

Would the Cardinals consider moving on from Chandler Jones to save salary cap space in 2021?

Chandler Jones will enter the final year of his contract with the Cardinals. Jones’ deal has him set to count $20.8 million in salary cap space in 2021. This is the first year that Jones does not have any guaranteed money remaining on the deal. Therefore, if they were to release him, all they would be left with in dead money was $5.3 million in prorated signing and restructure bonus. Therefore, the Cardinals would save $15.5 million in salary cap space in 2021.

However, the Cardinals have eight players who fill the front-seven positions on the defense set to become free agents. Therefore, potentially losing a ninth player with experience on this defense might not be a wise decision.

Robert Alford could be released by the Cardinals this offseason

Alford has yet to play a single game for the Cardinals since signing a three-year, $22.5 million deal in 2019. He broke his leg in 2019, before tearing a pectoral muscle in 2020. Having not played since 2018, Alford is set to count $9 million against the Cardinals’ salary cap in 2021. That is a big commitment for the Cardinals to make for a player who has missed the last two seasons by injury. If they were to release Alford, the Cardinals would save $7.5 million in salary cap space in 2021.

With the Cardinals having limited salary cap space in 2021, they also have a number of free agents they need to re-sign or replace. Those free agents include Kenyan Drake, Patrick Peterson, Larry Fitzgerald, and Haason Reddick.

D.J. Humphries presents the most lucrative option for opening up salary cap space in 2021

The 2021 NFL season sees Humphries set to count $19.9 million against the 2021 salary cap for the Cardinals. $19.4 million of that is guaranteed, so the Cardinals’ only real option would be a restructure. They could turn $14.5 million of his base salary and roster bonus into a signing bonus. That would save $7.1 million in salary cap space in 2021.

However, any restructure the Cardinals do would make it more difficult for the Cardinals to release Humphries after 2021 if they wanted to.

Could the Cardinals look to clear some cap space in 2021 by restructuring Jordan Phillips’ deal?

Ahead of the 2020 NFL season, Jordan Phillips signed a three-year, $30 million contract. In 2021, he is set to count $12 million against the Cardinals’ salary cap. Of that $12 million, $10 million is base salary, which the Cardinals could convert around $9 million to a signing bonus. That would see the Cardinals save $6 million in salary cap space.

Related | Will Larry Fitzgerald retire in 2021? Looking back on his 17-year career

However, if the Cardinals wanted to release him after this season, it would increase the cost to $10 million in dead money.

Which other players could the Cardinals look to restructure?