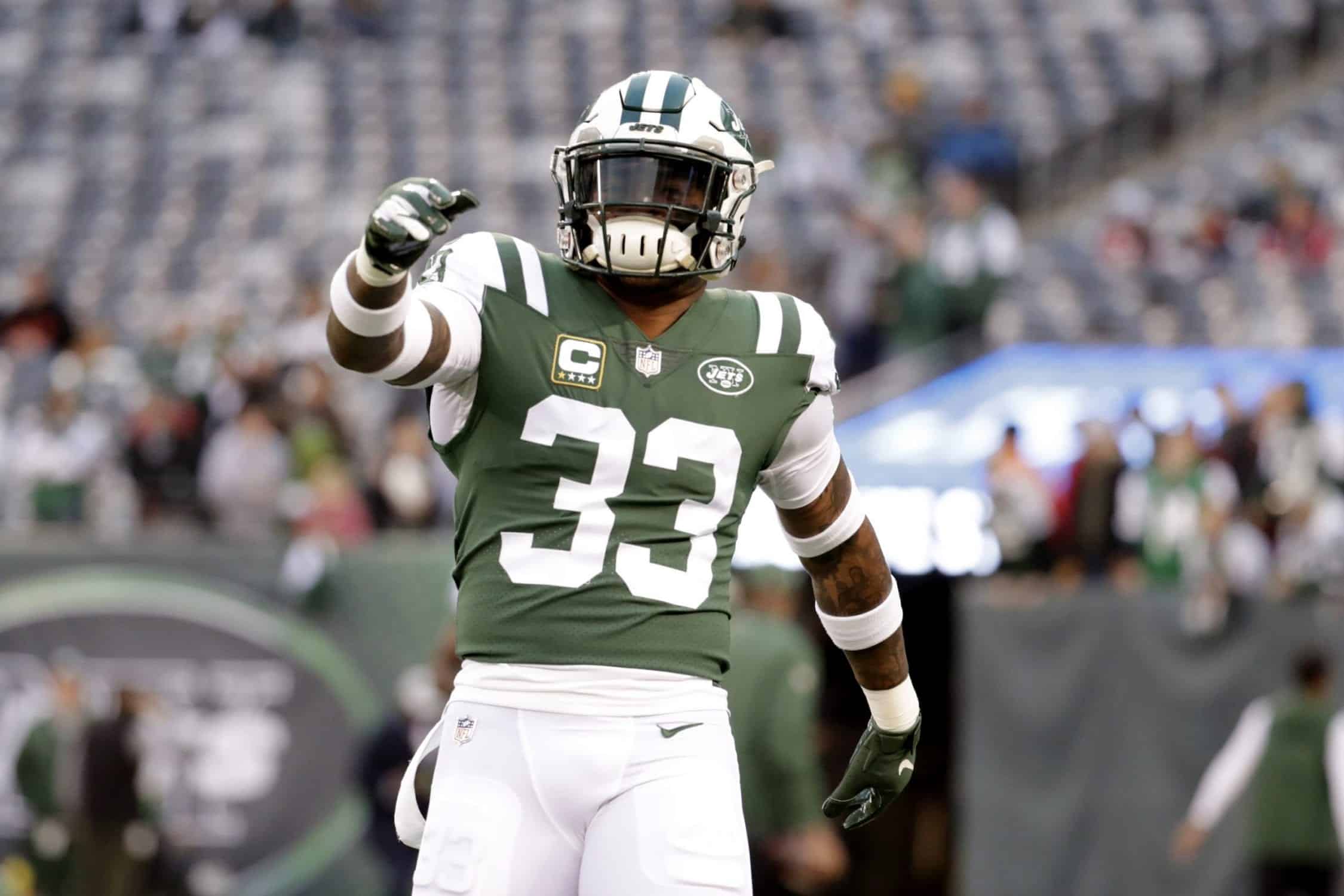 FILE - In this Dec. 15, 2018 file photo New York Jets strong safety Jamal Adams works out prior to an NFL football game against the Houston Texans in East Rutherford, N.J. Adams vowed as a rookie to never miss another Pro Bowl after the selections were announced last year. Adams was picked as the starting strong safety for the AFC after being a bright spot in a mostly otherwise gloomy season for the Jets. (AP Photo/Julio Cortez, file)
What's in this article? Click to show
Why a Jamal Adams trade in 2020 is very unlikely
The trading partners
Do Jets hold the edge?

Jamal Adams wants a trade out of New York in 2020. Despite promising a lucrative deal in the future, the New York Jets and their best defender could be looking to head down a path ending in a breakup. However, for all those fans wondering if and when Adams will be traded, that all could be hypothetical.

Adams has made it clear throughout his social media that his time in New York hasn’t been pleasant. Three seasons after being drafted out of LSU, the 24-year-old superstar has been to a pair of Pro Bowls and captured two All-Pro nods. But recent videos of him “trying to get to Dallas,” and a list of potential future homes puts the Jets in a predicament.

Despite a young career, Adams has proven to be one of the best safeties in football. Considered one of the premier talents entering the 2017 NFL Draft, the Jets hit a home run by snagging the Bayou Bengal sixth overall. And since joining the league, Adams has finished with a league-high in sacks (12), second-most in forced fumbles (six) and top 10 in pass breakups (25) among defensive backs.

For the Jets to walk away from the trade as a winner, they’d have to bring home the goods. In reality, there have been few defenders worth a hefty payday to a roster, thus making it impossible to find legitimate value for Adams and the position.

Why a Jamal Adams trade in 2020 is very unlikely

Troubling times in the Big Apple

Adams has made it clear that the Jets should make him their highest-paid player. Outside of Sam Darnold, who could be in for a make-or-break year, few would argue against it. Recently signed linebacker C.J. Mosley, who averages $17 million per season, could either fizzle or flash after missing a majority of the 2019 campaign.

Looking at Adams’ production merits a new deal. In three seasons, he’s tallied at least 75 tackles and nine tackles for losses. In coverage, the well-rounded prospect will make a minimum of half a dozen pass breakups and usually an interception along the way. His respect from other players might also factor in his role as a leader.

“He has been one of the best players I’ve seen play in person,” Jets coach Adam Gase said during the team’s final press conference last year. “He’s done nothing but work extremely hard, fight through injury, be there for his teammates, make plays when we needed him to.”

All it takes is one year of production to garner a new paystub. However, the position – and defensive positions as a whole, usually never see the grand payday until their second contract.

In 2019, Jalen Ramsey entered training camp with an armored truck, demanding the Jaguars to pay him before his fourth year. He was shipped to the Rams for a pair of first-round picks and is still waiting for his payday. Khalil Mack, who took home the 2016 Defensive Player of the Year honors, only received a fifth-year option with the Raiders. He wouldn’t get his $141 million deal until the Bears gave up a pair of firsts before the start of the 2018 season.

Jamal Adams being a stud in coverage pic.twitter.com/kOEjr1zJty

Von Miller (who tallied 35 sacks in three seasons), Aaron Donald (a then two-time first-team All-Pro), and Frank Clark (22 career sacks) weren’t offered extensions following their third years. Plus, throwing in the fact that the season could be on hold due to the current pandemic, Adams’ new deal, despite GM Joe Douglas’ comments, seems too far-fetched to be real.

According to ESPN’s Jeremy Fowler, Adams wants his new deal to be worth roughly $20 million a season. Not only would that deal make him the highest-paid safety in the league, but also just outside the top-five in defensive names.

If the Jets refuse to pay him – whether in 2020 or beyond – finding the trading partner will be the only way for New York to be a winner. For the trading partners, it’ll be even tougher to dissect the market price for two more seasons.

According to ESPN’s Adam Schefter, Baltimore, Dallas, Houston, Kansas City, Philadelphia, San Francisco, Seattle, and Tampa Bay are the eight franchises Adams wants to join. Among the eight, only two teams entering the season (Philadelphia and Houston) would be able to offer the Pro Bowl safety the deal above.

Houston, Kansas City, and Baltimore all should be out of the running before the race begins. All three rosters will have to pay their quarterbacks after two MVP seasons, and five total Pro Bowls nods. Houston is without a first-round pick until 2022, while the Ravens and Chiefs are well below the double-digit million cap space entering 2020.

Could the Dallas Cowboys find a way?

Ultimately, Dallas, Philadelphia, and Tampa Bay have the best play. The question remains, what would the asking price be to make that dream a reality? If the report that Dallas offered a first and cornerback Anthony Brown last season, that could be a starting point.

Dallas will gain the most traction due to the ties to the state. Also, the franchise needs a standout safety after missing out in the Earl Thomas market last season, settling for the likes of Ha-Ha Clinton-Dix this offseason. However, if the asking price last season wasn’t enough, Douglas is only expected to expand the bounty for a trade.

According to PFN’s Tony Pauline, the Cowboys would have to be willing to include tackle La’el Collins in a deal for Adams. The 26-year-old standout is coming off a stellar season in which he helped Dallas allow only eight sacks. With a recent five-year extension and the value of his position, it’s hard to imagine Jerry Jones parting ways without an immediate replacement.

Jones already handed out contracts to Ezekiel Elliott, Amari Cooper, and Jaylon Smith a season ago. Despite the hopefulness of the July 15 deadline ending with Prescott signing a deal, all the franchise tender means is he’ll be set for this coming year. Should the team make a deal for Adams and offer the extension, promising talent like Leighton Vander Esch and Michael Gallup are likely heading elsewhere when their rookie contracts expire.

Oh hey look at this edit of Jamal Adams in a Dallas Cowboys jersey on Instagram that Jamal Adams happened to like pic.twitter.com/r3OBYWNbTV

Is there another team that could try to sign Adams?

Tampa Bay would have to enter the “win now” mode in acquiring Adams to have him reunite with Todd Bowles. The Buccaneers will be paying Tom Brady in “Tompa Bay” over the next two years, thus putting pressure on them to win before the safety’s deal is up. In 2022, they’d likely have to decide if Adams is worth the massive deal or if Brady is still up for another extension.

Philadelphia has a massive need to replace Malcolm Jenkins, but what would the asking price be?  The team won’t likely give up their 2021 first-round pick, but a sure-fire talent could enter to make the offer more enticing. Who would push the deal over the edge outside of Carson Wentz and Darius Slay, both of whom received extensions in the past 18 months?

Do Jets hold the edge?

Ultimately, the Jets might hold leverage over Adams entering 2020. When training camp begins on the expected July 28, players will be forced to follow the new collective bargaining agreement. Should a player holdout, the NFL could fine him $40,000 a day. To rescinded it, the two parties must reach a deal.

Adams will have little leverage to fight back and hold on. On the rookie contract, Adams is expected to make $3.52 million for the upcoming season. The Jets have made it clear that he will be a priority in the coming years, but not a necessity to pay right away. Once the salary cap is expanded after the impending season, the two could re-evaluate a new deal soon.

Should Adams sit out and refuse to suit up for gang green, he’s only hurting himself. Should he sit, that will factor into his pay. Should he play, he’ll just be playing on the current contract. Either way, it’s a lose-lose situation for the safety and a winning recipe for the Jets.

The team will deal with a disgruntled defender, but what else will they lose? And if given an offer they can’t pass up, perhaps parting ways on a unique relationship will be the next best option. No matter how you look at this, New York’s stance on hopefully keeping Adams long-term is still in-tact thanks to the new CBA agreement.

"He is a safety, not a left tackle, not a shut down corner, not a quarterback. He is a safety, you cannot forget that he is a safety."@BrandonTierney is all the way out of bounds on if the Jets should give Jamal Adams a contract extension. pic.twitter.com/kzySTj5fpV

If any team does want Adams, then good luck. The Jets will be able to offer whatever they please and stand firm until the deal is over. As for Adams, this holdout won’t be going his way anytime soon, so prepare for another year inside the Big Apple.