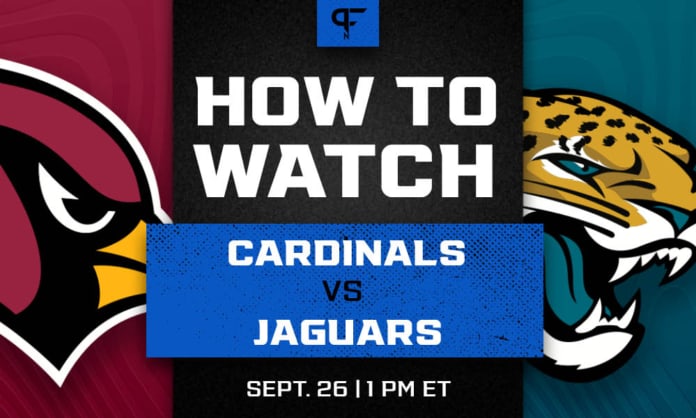 What are the Cardinals vs. Jaguars odds and prediction, what channel is the game on, and how can you stream this Week 3 matchup?

You’ll see two exciting quarterbacks face off in this week’s Arizona Cardinals vs. Jacksonville Jaguars Week 3 game. Here are the latest NFL odds, prediction, TV channel, and how to watch the Cardinals vs. Jaguars game in Week 3.

Arizona Cardinals vs. Jacksonville Jaguars prediction and odds for Week 3

Odds are provided by DraftKings Sportsbook.

There are a lot of intriguing storylines in the Cardinals vs. Jaguars Week 3 contest. Many minds float towards the QB matchup between Kyler Murray and Trevor Lawrence, which makes sense. Two former Heisman Trophy winners competing at the pro level will always draw eyes. However, it’s the head coaching matchup that might interest some more.

Kliff Kingsbury takes on Urban Meyer for the first time in the beginning stages of their NFL coaching careers. Both were the last two high-profile names to make the jump from the collegiate level. While Meyer is only two games into his career with Jacksonville, both have received mixed opinions.

On the plus side, they came into the league with the No. 1 overall pick (Kingsbury in 2019, and Meyer this past spring). And both used that pick on future franchise quarterbacks: Murray and Lawrence.

So far in 2021, Murray has looked fantastic. He currently ranks second in the NFL for passing yards (689) and touchdowns (7), trailing Derek Carr and Tom Brady, respectively, in each category. Additionally, he’s tied for second in the NFL in rushing touchdowns with 2. Murray’s led the Cardinals to a 2-0 record overall, 1-1 against the spread, and the second-highest scoring average with 36.

Last week against Minnesota, Murray led the Cardinals from a 7-20 deficit to take a 24-23 lead into the half. While the defense struggled to keep up with the Vikings’ offense in the first half, Murray was able to find a way to win using both his arm and legs, finishing with 4 touchdowns on the day after scoring 5 in Week 1.

Is it Trevor Lawrence’s time to break out?

On the other side of the field, Lawrence has struggled to find his groove with Meyer in Jacksonville’s offense. Lawrence and fellow rookie quarterback Zach Wilson are suffering in our NFL rookie QB rankings — both have thrown for a league-high 5 interceptions in their first two games.

Going up against a Cardinals defense that ranks third-worst against the run through the first two weeks, it might be time to feature James Robinson and the running game.

With the total currently at 51.5 for the Cardinals vs. Jaguars game this Sunday, expect some points to be scored. Outside Arizona’s sack production in Week 1, which featured 5 alone from Chandler Jones, neither defense has proven they can be efficient for four quarters. The edge goes to the Cardinals in this one, primarily due to experience across the roster and coaching staff.

How to watch Cardinals vs. Jaguars this week