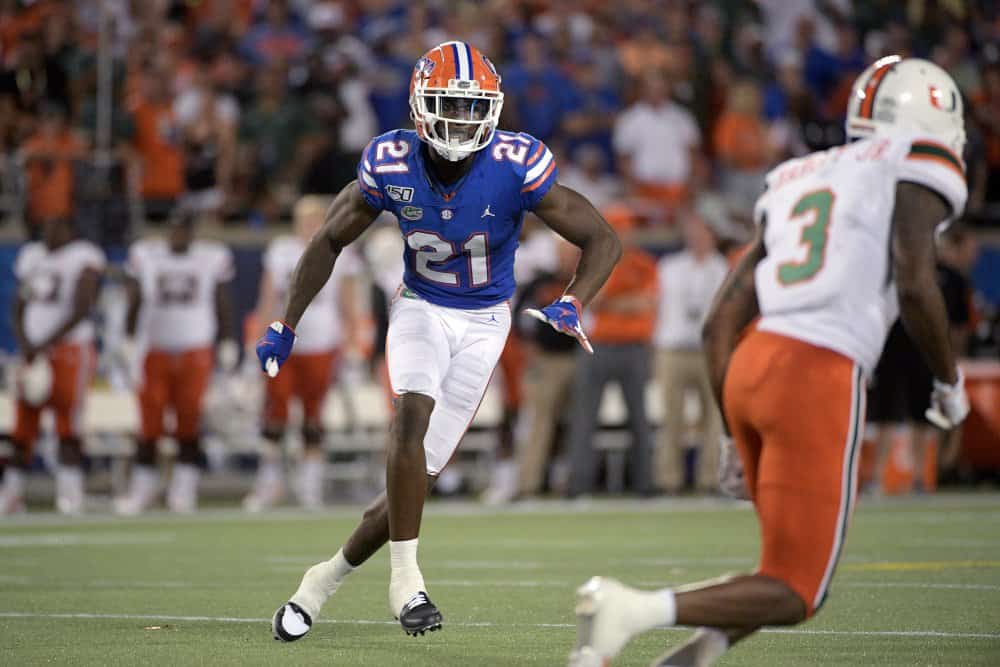 Every year, a host of NCAA football teams stake a claim on the title of “DBU” — Defensive Back University. These schools don’t merely produce NFL defensive backs; they do so with tireless consistency and quality. In recent years, the Florida Gators have challenged for the crown as the top defensive back developer, and depending on the progression of Gators CB Trey Dean in 2020, they can take hold of the title for good.

Since 2016, the Florida Gators have supplemented the NFL with droves of talent, sending defensive backs such as Vernon Hargreaves, Keanu Neal, Marcus Maye, Quincy Wilson, Duke Wilson, Marcell Harris, Chauncey Gardner-Johnson, and CJ Henderson to the top professional stage. A large portion of those players have become solid contributors for their respective squads, diverting attention to Florida as one of the nation’s defensive back factories.

Despite this recent success, however, other schools such as LSU, Ohio State, and Virginia Tech have stronger track records over time. The Florida Gators need at least one more year of legitimate production before they can challenge for the DBU moniker. Luckily for them, they might field a good crop of prospects in the 2021 NFL Draft.

Three players, Marco Wilson, Shawn Davis, and Donovan Stiner, figure to be starters in 2020 and all have the ball production to assume that they might safely inhabit the NFL Draft in 2021. Versatile Gators CB Trey Dean is more of a wild card. Dean, a true junior, has tangible upside, but does he have what it takes to take Florida’s secondary over the top?

With CJ Henderson and Marco Wilson accompanying him at the cornerback position in 2019, Trey Dean was often relegated to the slot, where he fulfilled a multitude of roles for the defense. Dean actually started fewer games in 2019 than he did as a true freshman in 2018, but he showcased his potential in different ways and left room for projection as to his football future.

Dean, a four-star recruit from the 2017 cycle, came to Florida already standing at 6-foot-3, weighing in at around 184 pounds. He’s since added ten pounds to his frame, and it’s helped him become a more complete player while maintaining his athletic ability. Let’s take a quick look at how Dean’s traits translate to the football field.

First, let’s watch Dean’s mobility in space. This recent clip, from July 8, does a good job of encapsulating Dean’s movement skills — both in terms of his limitations and strengths. He doesn’t have complete breakaway speed, but here, against elite athlete Trevon Grimes, he manages to avoid losing too much ground. You can also see that he’s reasonably fluid when it comes to changing direction, and he’s able to bend across the field without sacrificing too much forward momentum.

Dean’s solid athletic foundation, while not at the top of his position, gives him enough of a toolset to work with when covering opponents. He has the athleticism to be a versatile chess piece in the defensive secondary, and with his other traits, he fields a relatively complete profile.

Capitalization at the catch point

Cornerbacks with height and mobility are some of the most exciting to scout because their multifaceted allotment of traits allows them the most potential on the football field. Dean has a good foundation, in this sense, and he uses his size to make plays when his mobility allows him to stay engaged.

Check out this play below, where Dean runs stride-for-stride with former South Carolina Gamecocks receiver Bryan Edwards and swats the ball out of Edwards’ hands once they reach the end zone. Edwards is known for being one of the more sturdy, physical receivers to play in the SEC in recent years, but here, Dean doesn’t flinch. He sticks close, and waits until the exact right moment to time his punch, and use his length to render the pass incomplete.

What a play by Trey Dean pic.twitter.com/JF1woaYmqi

Ideally, Dean would turn his head around at some point, to avoid getting a pass interference call at the next level. But the fact that he didn’t turn his head perhaps makes this play even more impressive. Dean reacted with tremendous quickness and precision and allowed his instincts to come into play when he needed them most.

Below is another play that showcases Dean’s ability to convert in contested situations. This play highlights the Gators CB’s ability to defend different kinds of passes. While the last throw was a 50-50 ball lofted into the air, this next one is a bullet that sinks low into the intermediate range of the field. The receiver slides down to catch it, but Dean uses his length to obstruct the ball’s path just before it reaches its target.

Dean has a very good combination of speed and length, and he shows impressive flashes of timeliness with the use of his length. He still needs to show more consistency over greater periods of time, but Dean’s upside is easily noticeable on film.

You might be surprised to learn, after reading about Dean’s upside in coverage, that his ball production in college is lacking thus far. In two seasons, Dean only has two interceptions and six pass deflections. In 2019, he only had one interception and one pass deflection in 12 games.

Of course, Dean’s role in 2019 changed. He was often used as the team’s STAR defender, replacing Chauncy Gardner-Johnson as a defensive back hybrid who sometimes roamed close to the line of scrimmage. This is represented by Dean’s uptick in tackles for loss and sacks.

In his new role, Dean showed that his instincts applied to other areas, displaying good tackling angle awareness. But in an increasingly pass-heavy NFL, his production in coverage will fall under the microscope once he hits the draft circuit.

A more all-encompassing production resume in 2020 can help Trey Dean compound his draft stock, and complete the Florida Gators’ quest to be the nation’s DBU. Now a true junior, the time is nearing for Dean to exert his authority and become the next Gators’ great.