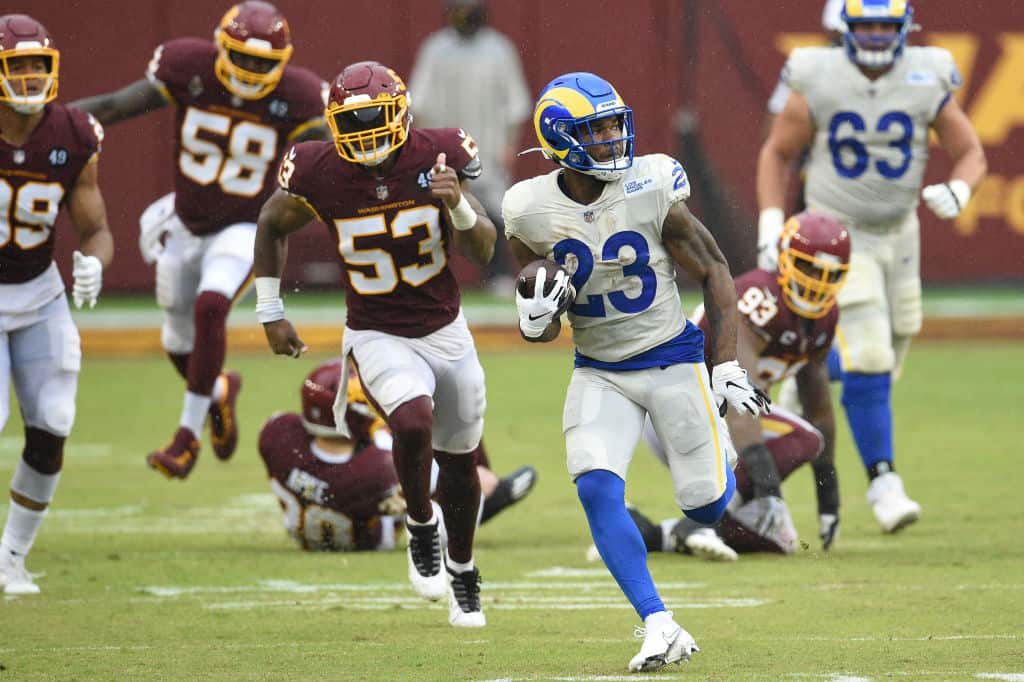 LANDOVER, MARYLAND - OCTOBER 11: Cam Akers #23 of the Los Angeles Rams carries the ball against the Washington Football Team in the second half at FedExField on October 11, 2020 in Landover, Maryland. (Photo by Patrick McDermott/Getty Images)
What's in this article? Click to show
What does Cam Akers’ 2020 fantasy data set look like?
How does Cam Akers work himself back into the committee for fantasy football managers?
More fantasy football coverage at Pro Football Network

It’s the million-dollar question for fantasy owners – what should you do with Cam Akers and his lack of touches this season? Before we take our journey through the 2020 season and what you should do, it must be noted that the Sean McVay offensive scheme is predicated on run/pass balance, stretch runs, and play action. The combination of stretch runs and play action is not all that dissimilar to Tom Moore’s lethal combo with Peyton Manning and the Indianapolis Colts in the early 2000s. Look no further than Jared Goff’s 223 passing attempts and the Los Angeles Rams’ 222 rushing attempts in 2020 to get all the evidence you need about offensive balance.

The 2019 Rams team didn’t have the production it needed on the ground, which affected play call balance, resulting in a 9-7 team that missed the playoffs. Enter Cam Akers, a second-round draft pick from Florida State. But he has garnered four snaps in the last two weeks. What do we make of this Cam Akers conundrum for fantasy football managers?

What does Cam Akers’ 2020 fantasy data set look like?

Like with any rookie, it’s hard to make much ado about small sample sizes, and this lack of volume is exactly the fear of fantasy football managers: why is the snap count so low recently? In Week 7, Cam Akers had one snap. One. If the logic is that Akers wasn’t ready for pass protection, why would he have had more snaps at the beginning of the season when he presumably has less knowledge of the pass protection sets? He had more touches Week 1 vs. the Dallas Cowboys than he has had the rest of the year.

Could the rib injury be affecting him? Cam Akers missed Week 3 and 4 after hurting his ribs, then it was nine carries (and a team-leading 61 yards) against the Washington Football Team in Week 5 – and since Week 5, crickets and tumbleweeds.

Now, Malcolm Brown and Darrell Henderson, the Rams’ two lead backs at the moment, played admirably against a stiff Chicago Bears defense on Monday Night Football. They ran decisively, and the Bears defense looked off-balance for much of the night: the tandem had 25 carries for 121 yards and a touchdown, with Henderson getting two receptions for 13 yards. Could this be a matter of two capable backs getting the job done, and all things being equal, the job goes to the vets, not the rookie?

Although coaches don’t just come out and say it, the lingering zeitgeist of playing the more seasoned pro over the rookie still has kernels of truth in today’s football world – do you think Anthony Lynn wanted to start Justin Herbert over Tyrod Taylor if he had his way? This could be an open-and-shut case of veterans outperforming the rookie in practice and maintaining that edge with on-the-field production.

How does Cam Akers work himself back into the committee for fantasy football managers?

Perhaps the team has finally seen him enough in practice to know his limitations, but frankly, the only way to carve out more volume is to demonstrate competency in practice. The other route is that Brown or Henderson get injured, and Cam Akers takes advantage of his opportunity. At the current writing, it’s hard to have much hope for Akers in a redraft league for the rest of the season.

Three of the next four games are teams in the top half of the league in rush defense (two of the opponents, 49ers and Buccaneers, are in the top 10). The Rams will have their bye after the Week 8 contest at Hard Rock Stadium in Miami, and Brown/Henderson will be able to rest their aching bones. This inevitably pushes back the likelihood of consistent Akers snaps until later in the season, if at all.

The conspiracy theorist in me likens back to the 2018 Playoffs, where Todd Gurley all but disappears, and the balanced Rams attack is suddenly one-dimensional. Could the Rams be saving the young back for later in the season to avoid 2018’s pitfall? McVay has mentioned in the media that he wants to get Cam Akers more involved in the offense, but it’s a bit of a head-scratcher when the coach says that and Akers gets zero touches on offense in a primetime game.

And frankly, it’s tough to resolve the words that we hear with the actions we see during game day. Fantasy football managers rostering Akers in a redraft league have every reason to panic; rostering him in a dynasty league is way less threatening, and unless you are on the outside looking in and you’re tempted to buy low, exercise restraint and let this play out, even into the 2021 offseason.

Aaron Sutton is a co-owner of the Pro Football Network and spends most of his time writing and editing. You can follow all of his dad jokes on Twitter, and if you want to talk football, you can find him at asutton@pfn365.com! Please refrain from yelling at him; he has five boys who routinely trample him every single day.

In this article:Cam Akers, featured