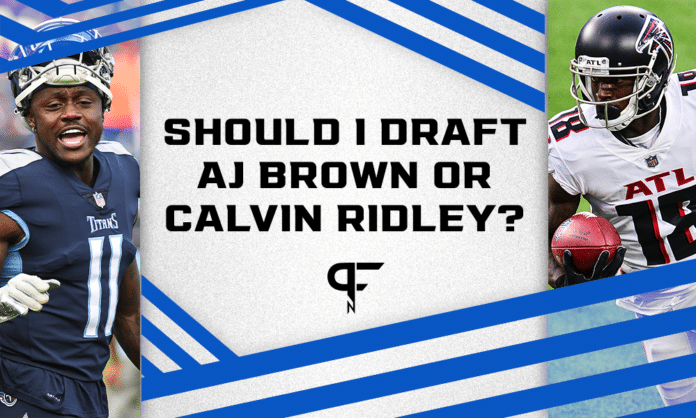 Calvin Ridley or A.J. Brown: Which fantasy football WR should you target?

The case for Calvin Ridley over A.J. Brown

What drives fantasy football production? Volume. For Tennessee Titans wide receiver A.J. Brown, he severely trails Atlanta Falcons wide receiver Calvin Ridley in this department. Last season, the Titans passed the ball on just 48.2% of their plays, while the Falcons sat at 60.6%.

In 17 games, Ridley has a good chance to eclipse 160 targets. Even with an extra game, Brown would be lucky to get to 125. That’s 2 targets a game fewer.

Even though the Titans jettisoned Corey Davis and Jonnu Smith from last season’s team, the arrival of Julio Jones is a net negative on Brown’s target share. While Ridley’s top competition is rookie tight end Kyle Pitts, Brown is competing with a future Hall of Famer for targets, and we know Derrick Henry will command touches on the ground.

Although Jones wasn’t on pace for his usual 160 targets last season, he did have 68 through nine games. That extrapolates to about 120 targets, all of which are now gone. As good as Pitts is expected to be, he’s not Jones. Russell Gage and Olamide Zaccheaus are rotational WR3/4s at best.

Ridley is not going to absorb Jones’ vacated targets, but the sum of the parts that will are not greater than the whole that was Julio Jones. Ridley remains a target hog.

Why you should draft Calvin Ridley in 2021 fantasy football leagues

Once Davante Adams, Tyreek Hill, and Stefon Diggs are off the board, I want Ridley. After shipping Jones off to join A.J. Brown in Tennessee, Ridley is locked in as the Falcons clear WR1.

Ridley has played 36 games with Jones, and in those games, he averaged 14.7 PPR ppg. In his eight games without Jones, Ridley averaged a whopping 20.1 ppg. Ridley goes from solid WR2 to elite WR1 when Jones isn’t around.

Although Gage had his moments last year, he is a far cry from the guy that used to be starting opposite Ridley in two-receiver sets. Pitts is much more of a threat to be second on this team in targets, but he’s still a rookie learning the hardest position in football outside of quarterback. Ridley is both a proven quantity and guaranteed a massive target share.

Both Calvin Ridley and A.J. Brown are great picks

When looking for a fantasy football WR to anchor your team, you can’t go wrong with either Ridley or Brown.

Brown was hyper-efficient as a rookie in 2019, averaging 20.2 yards per reception. That number dropped to 15.4 in 2020, which is still impressive but nearly identical to Ridley’s 15.3. Jones’ presence opposite Brown should provide Brown with a bump in efficiency, but he has no hope of matching Ridley’s volume.

I love both of these wide receivers, but in fantasy football, volume is king. I will take the bankable volume of Ridley over the projected efficiency of Brown. With that being said, as soon as Ridley and DeAndre Hopkins are off the board, give me all of Brown.