It’s been an up and down year for BYU. The Cougars scored big victories early in the college football season over Tennessee and USC before suffering a bad loss to Toledo as well as ending up on the wrong side of the scoreboard against South Florida. Despite their inconsistencies, tight end Matt Bushman has been one positive who shows up and performs every week. The junior is also turning into a much talked about next-level prospect in scouting circles.

Bushman caught my eye as a true freshman in 2017 when he started eight games and finished with 49 receptions for 520 yards. His production dipped last season, however, with just 29 receptions for 511 yards. This year, Bushman has posted 23 receptions for 297 yards in six games with one touchdown and has come through in big spots for the Cougars during several games.

The junior is a consistent pass catcher with an excellent feel for the tight end position and top-line football instincts. He continually finds the soft spot in the defense, snatches the ball from the air with strong hands, and works hard running after the reception.

While he doesn’t come across as a fleet-footed or overly athletic tight end that regularly beats defenders down the field, Bushman does display himself to be a solid deep pass-catching threat. While I have my concerns about his deep speed, sources close to BYU tell me Bushman is a low 4.7s/high 4.6s forty guy. Blocking is not his forte, but Bushman gives effort when asked to stay on the line of scrimmage to block and will get solid results. I’m told he has a passion for the game and is a prospect who loves football.

This weekend, Bushman and the Cougars go up against the undefeated Boise State Broncos and their stout pass defense that’s allowing slightly more than 200 yards per game through the air. Bushman will be relied upon to come through for the BYU offense.

BYU has put plenty of productive tight ends into the NFL, and there’s no question Bushman is next in line. The question is how soon before he makes his jump to the next level.

Sources tell me that Bushman, a week one riser, is leaning towards entering the NFL Draft at the end of the season, with a few people telling me they are confident he will be playing in the NFL in 2020. Where will he end up if he enters the draft? Presently, I believe Bushman will be selected somewhere in the early part of day three and then go on to have a successful career as a second tight end in the NFL. 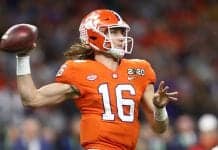 Vanderbilt LB Dimitri Moore flying under the radar in 2020