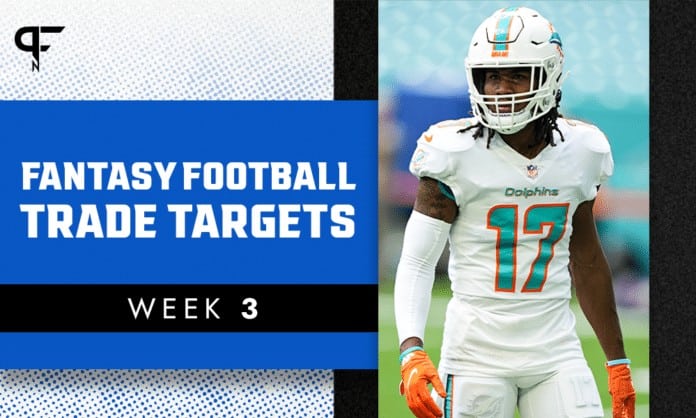 As we approach Week 3, capitalize on these opportunities to buy low and sell high and bring improvements to your fantasy football roster.

There were some epic fantasy performances during Week 2 of the NFL slate. The perception of certain players isn’t always reality. Here are a handful of players entering Week 3 of the fantasy football season, presenting an optimal opportunity to either buy low or sell high on them.

Who are some fantasy football Week 3 trade targets to buy low?

All of these candidates are in a position to exceed the expectations of fantasy managers. Everyone views players differently. Here are four such candidates you can trade for at a discount.

The Bills annihilated the Dolphins, and Miami’s offensive line was an abomination. To make things worse, the team’s franchise quarterback Tua Tagovailoa left the game with bruised ribs. His status for Week 3 is unknown, but this creates a buying opportunity for rookie receiver Jaylen Waddle.

Waddle caught 6 of 8 targets for 48 receiving yards against the Bills. The former Alabama star was one of the most explosive receivers in this year’s draft class. Waddle should continue to be actively involved in the Dolphins’ passing game. Teammate Will Fuller’s 2021 season debut was pushed back due to a personal matter that recently surfaced, and it’s unknown how long he’ll be sidelined.

Miami opened the season with difficult matchups against the Patriots and Bills. From Weeks 3-7, the Dolphins face the Raiders, Colts, Buccaneers, Jaguars, and Falcons. Miami should get back on track sooner rather than later, and Waddle will be a big part of that.

The Saints’ offense only had 128 total yards against the Panthers — their fewest in a game in 20 years. It was surprising to see Alvin Kamara not have any running lanes against Carolina’s defense. He rushed 8 times for just 5 yards, adding 5 receptions for 25 additional yards.

Many fantasy managers are likely astonished by how the Saints’ offense has looked to start the season. New Orleans has a lot of work to do to prepare for the Patriots on the road in Week 3. Nevertheless, Kamara is the most reliable weapon the Saints have on offense.

From 2017-2020, he’s averaged 22 PPR fantasy points per game. Given Kamara’s statistical body of work, it would be prudent to send some offers to other managers in your league.

Jonathan Taylor rushed 15 times for 51 yards and had a reception for 2 yards. Taylor was also frustratingly stopped on multiple rushing attempts inside the 5-yard line. After two challenging matchups to start the season against the Seahawks and the Rams, this wasn’t the start Taylor’s fantasy managers had envisioned.

The good news is that the Colts’ schedule loosens up considerably from Weeks 3-10, with games against the Titans (twice), Dolphins, Ravens, Texans, 49ers, Jets, and Jaguars. Taylor showed us what he’s capable of late last season.

He went nuclear from Weeks 11-17, as the Colts allowed him to transition to boss mode. He played 61% of the team’s offensive snaps during that time frame, averaging 22.7 opportunities, 139.5 total yards, and an impressive 24.3 PPR fantasy ppg. Taylor finished as an RB1 in five out of six games.

The second-year running back will be in a prime position to bounce back, so start sending out some trade offers to acquire him.

Browns receiver Jarvis Landry left Sunday’s game against the Texans after suffering a knee injury. It’s unknown at this point how long the veteran receiver will be out. Fantasy managers are also waiting for Odell Beckham to return from his ACL injury. Upon his return, he’s the Browns’ No. 1 receiver. However, I’m more curious to see who emerges as their No. 2. Donovan Peoples-Jones is my preferred option over Rashard Higgins.

Last season, in 12 games, Peoples-Jones had 14 receptions on 20 targets for 304 yards and 2 touchdowns. Some managers may gravitate to Higgins. Yet, he’s hasn’t taken advantage of opportunities in the past to emerge as a legitimate No. 2 receiver.

Which potential trade targets should you sell high on?

Many of the players on this list are widely known by fantasy managers. Some of them could disappoint early in the season. Will you cash your chips in?

Devin Singletary had another solid game for the Bills in Week 2. He rushed 13 times for 82 yards and a touchdown against the Dolphins. It is worth noting that 56% of his rushing yards came on his touchdown run. Zack Moss was active this week but a surprise inactive in Week 1 due to health concerns. Bills head coach Sean McDermott said publicly that he had a good week of practice.

Moss had 10 opportunities this week. Most importantly, he saw opportunities in the red zone. Unfortunately, Moss and Singletary will continue to operate as a committee in Buffalo’s offense. Now is an ideal time to sell high on Singletary.

Marvin Jones caught 6 of 11 targets for 55 yards and a touchdown against the Broncos this week. The veteran receiver led the team in targets. Laviska Shenault finished with 7 targets. Jones, meanwhile, has 20 targets through two games. He’s essentially operating as the Jaguars’ No. 1 receiver.

Jaguars’ rookie QB Trevor Lawrence is still adjusting to the NFL game. Through two games, he’s only completed 42 of 84 pass attempts for 450 receiving yards. You should consider trading Jones now while his fantasy value is high.

Darrell Henderson rushed 13 times for 53 yards and 1 TD. He also had 3 receptions for 29 yards against the Colts. Henderson looked great and was seeing bell-cow volume. Yet, he left the game with a rib injury. At this point, Sony Michel became more involved, rushing 10 times for 46 yards.

Even if Henderson is healthy in Week 3, Michel will have a role. Rams head coach Sean McVay, unfortunately, doesn’t care about any of our fantasy teams. Los Angeles also acquired Michel for a reason. The former Patriots RB could be more involved as he adjusts to his new surroundings with the Rams.