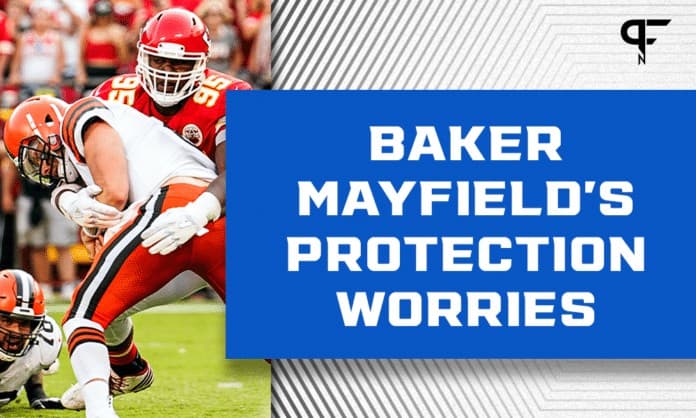 The Cleveland Browns have put together an enviably talented offensive line. But that does Browns head coach Kevin Stefanski and offensive coordinator Alex Van Pelt no good if those excellent players are unavailable due to injuries.

The Browns are big-time favorites against the Houston Texans on Sunday. But if there’s a path to 0-2, it’s Baker Mayfield getting pummeled and Nick Chubb having nowhere to run. And that’s not as far-fetched as it sounds — even against one of the worst rosters in football.

Thursday’s news was only slightly better. While Conklin returned and participated on a limited basis, Wills, Tretter, and Hubbard all missed a second straight day.

That uncertainty, combined with Odell Beckham Jr.’s Week 2 status — Stefanski ruled him out for Week 2 on Wednesday after Beckham couldn’t go against the Chiefs in the opener — hasn’t been ideal for a Super Bowl contending team facing a critical game.

Wills, Mayfield’s blindside blocker, has allowed just 4 sacks in his first 17 NFL games. But he left the Chiefs game on a medical cart in the first half and did not return. Thankfully, the injury looked worse than it actually was. The fact that the Browns have not placed Willis on injured reserve suggests they expect him back at some point in the next three weeks. His status, officially, is day-to-day.

Conklin is a two-time All-Pro who has missed just eight games due to injury in his six-year career. However, he’s dealing with a knee injury that has seemingly flared up since the opener. He was on the field for all 59 of the Browns’ offensive snaps in Week 1.

Tretter brings as much leadership as he does production. The NFLPA President has lent his voice to the league’s thorniest issues. But he’s also an outstanding player, allowing just 4 sacks in the last four seasons. Like Conklin, Tretter is also dealing with a knee issue.

Furthermore, it’s not as if the Browns can count on automatically plugging in Hubbard if either Wills or Conklin are out on Sunday. He’s dealing with a triceps issue that cropped up in the game.

That could leave the Browns turning to third-stringer James Hudson at left tackle. Hudson is a rookie out of Cincinnati whom Cleveland selected with the 110th pick in the 2021 NFL Draft.

That’s not an ideal option, but it might be the Browns’ only one. Conklin, Wills, and Hudson are the lone tackles on Cleveland’s active roster, although they could activate Jordan Steckler from their practice squad. The depth chart lists Nick Harris as the Browns’ backup center, so that would presumably be the plan if Tretter can’t go.

“With all of those guys, we are just trying to be smart,” Stefanski said. “Part of it is, yes, they are veterans and want to make sure that we have them for the long haul.”