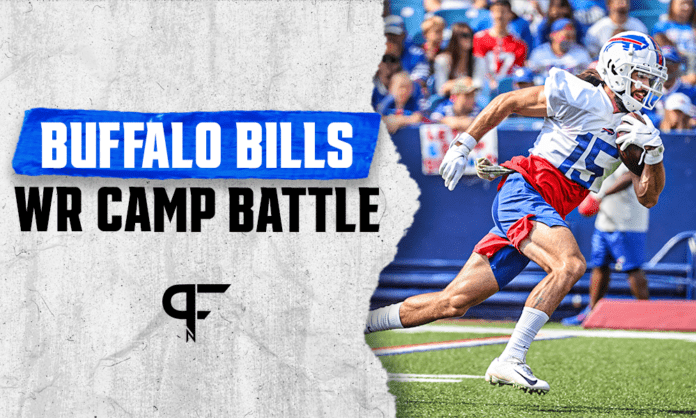 As NFL training camps rage on, how will the Buffalo Bills' WR depth chart shake out before the 2021 season opener?

Buffalo Bills quarterback Josh Allen is a popular MVP pick after his breakout 2020 campaign, and it’s easy to understand why. He was fantastic last year and has an even better supporting cast in 2021. One could credibly argue that the Bills have the best group of wide receivers in all of football.

How will the Buffalo Bills’ WR depth chart shake out?

Stefon Diggs and Cole Beasley are back after combining for a ridiculous 209 catches, 2,502 receiving yards, and 12 touchdowns last year. Now add Emmanuel Sanders to the group that includes an ascending Gabriel Davis, and the Bills are absolutely loaded at the position.

In fact, offensive coordinator Brian Daboll’s biggest challenge might be finding ways to incorporate them all. Allen targeted Beasley and Diggs on 273 of his 572 pass attempts last season. Diggs will be the primary receiver in 2021, but Beasley’s production could drop a bit this fall.

During a news conference on Monday, August 2, Daboll suggested that Diggs, Beasley, and Sanders are Buffalo’s top three receivers. Sanders will presumably eat into Beasley’s targets, but he’s not the only one.

We’re told the Bills are expected to keep six receivers, and short of something crazy happening, that six is pretty much set. Davis, a fourth-round pick in the 2020 NFL Draft, is a lock to make the team after producing a 35-599-7 line as a rookie. Daboll went on to say:

“He’s a pro. Very fortunate to get him where we got him [in the draft]. He’ll continue to get better and better. Have a lot of confidence in him. Can play all the spots. He’s one of the guys that Stef gets a down day and you’re always like, ‘OK Gabe, get in there.’ You don’t even tell him where he’s at. He just goes in and knows it. I have a lot of confidence in him. We were fortunate to get him in the fourth round.”

Who fills the final spots on the Buffalo Bills’ WR depth chart?

So, that’s four spots. The fifth almost certainly belongs to Isaiah McKenzie, who had 5 touchdowns on 30 catches last year. “I love the kid,” Daboll said. That probably leaves just one job for the seven other receivers at Buffalo’s training camp.

In truth, Jake Kumerow is well on his way to locking it down. A league source tells us Kumerow “is killing it” in practice and is the odds-on favorite to make the team.

“You want to see guys who are maybe behind the top guys, you give them a day of rest or another guy gets dinged up and see where those guys fall in and if they can do it,” Daboll stated. “He’s done a really good job for us. Really as a receiver but in the kicking game too. It’ll be an important preseason game, when we start the preseason games, for him.”

So, those are your most likely six opening-day wide receivers for Buffalo. This means Day 3 draft picks Marquez Stevenson and Isaiah Hodgins are likely headed to the waiver wire in a few weeks. Set your fantasy football draft boards accordingly.