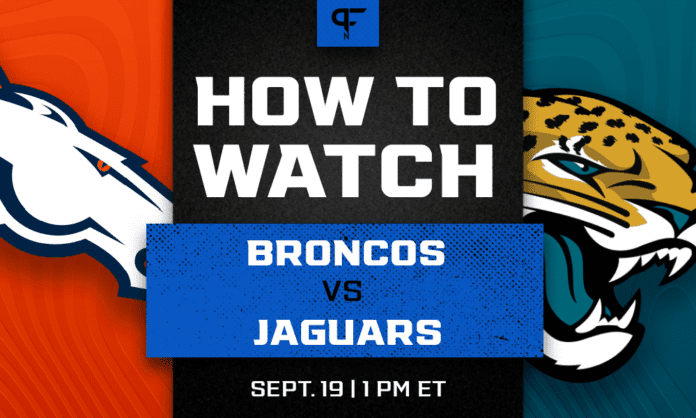 Broncos vs. Jaguars odds, line, prediction, and how to watch the Week 2 game

What are the Broncos vs. Jaguars odds and prediction, what channel is the game on, and how can you stream this Week 2 matchup?

Sunday’s Denver Broncos vs. Jacksonville Jaguars matchup features a tale of two different franchises. Denver handled business in Week 1 while Jacksonville laid an egg against a less-than-stellar Houston Texans squad. Let’s look at the current NFL odds, TV channel, how to live stream the game, and a prediction for the Broncos vs. Jaguars Week 2 matchup.

Denver Broncos vs. Jacksonville Jaguars odds and prediction for Week 2

Odds are from DraftKings Sportsbook.

First things first, Jaguars head coach Urban Meyer said this week there’s “no chance” he takes the USC head coaching gig. Even after the 37-21 Week 1 loss to Houston last Sunday, he’s committed to building Jacksonville into a consistent winner. That starts with rookie quarterback Trevor Lawrence getting a feel for the game at the NFL level, something he struggled with in his debut.

Against Houston’s defense, Lawrence threw 3 interceptions while completing 28/51 passes. At the same time, he threw 3 touchdowns for a total of 332 yards, completing at least 3 passes to five different receivers. He’ll face a much tougher defense when the Broncos come to town.

Last week, the Broncos were road favorites, in large part due to head coach Vic Fangio’s defense. Led by Von Miller’s 2 sacks, Denver’s defense held the Giants’ offense to 314 total yards. More notably, running back Saquon Barkley was only able to average 2.6 yards per rush on the ground against Denver’s front seven.

On paper, this game should be dominated by Denver across all three phases of the game. Quarterback Teddy Bridgewater, who beat out Drew Lock, not only managed the game well but was one of the more efficient quarterbacks across the league in Week 1. Additionally, he got a lot of help on the ground from Melvin Gordon, rushing for 101 yards and a touchdown.

Jacksonville needs to hold out hope they’ll get the ball often against a Broncos offense that’ll try to control the clock and keep Lawrence off the field. Even without wide receiver Jerry Jeudy (who was placed on IR this week with a high ankle sprain), Bridgewater should find consistency against Jacksonville’s defense, which gave up 449 yards on Sunday. Regardless, it’s the Broncos stifling defense that will win them this game.

How to watch Broncos vs. Jaguars this week