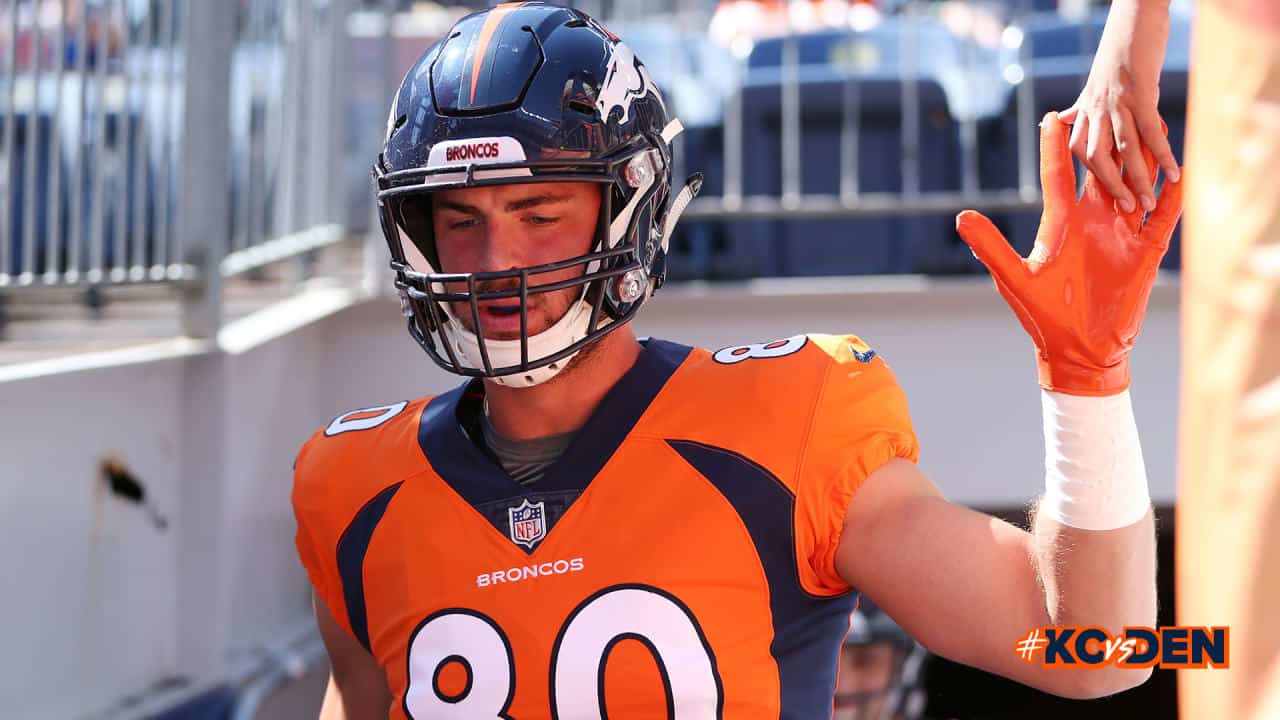 Photo Credit: Denver Broncos
What's in this article? Click to show
Jake Butt trying to prove he can play
Royce Freeman finds himself on the roster bubble
Can DaeSean Hamilton finally breakthrough?

With plenty of competition across the offensive board, there are a few players still fighting to prove they belong on the team. Obviously, players like wide receiver Courtland Sutton and running back Phillip Lindsay aren’t in any danger of losing their role within the Broncos offense, but there are players slotted behind these two playmakers, who are looking to carve out a specific role. I’ll be taking a look at some of the offensive players on the bubble and how they can earn their spot on the roster in training camp.

Jake Butt trying to prove he can play

The Broncos have been consistently investing in tight ends over the years via the NFL Draft. Denver has drafted the likes of Jeff Heuerman, Troy Fumagalli, Albert Okwuegbunam, and Noah Fant, but the biggest draft pick at tight end that remains a question mark on this team is Jake Butt, the former University of Michigan standout. Butt has been dealing with knee injuries since his final game at Michigan, and since then has struggled to stay healthy throughout his short career in the NFL.

The Broncos were able to get a small glance of what the former Wolverine could do in 2018 when he played in three games and caught eight passes for 85 yards. However, his season was cut short with another noteworthy injury. Butt also missed the entire 2019 season, undergoing his fourth major knee operation since 2014.

Butt’s skillset coming out of college had him listed as one of the top tight ends of the 2017 class and a likely second-round pick, but his health concerns and issues staying healthy since then, have put a damper on his career. He isn’t ready to call it quits just yet and neither are the Broncos, as they have committed to keeping him around and giving Butt plenty of room to shine during training camp. Butt has been healthy in camp thus far and with the elimination of preseason games, he has a chance to finish camp with a clean bill of health.

Can Butt beat out Andrew Beck?

The Broncos are loaded at the tight end position, especially after drafting Okwuegbunam in the 2020 NFL Draft and signing former Seahawk and Steeler Nick Vannett in free agency. The team did release the veteran Heuerman, but another tight end stands in the way of Butt’s chance of earning a final roster spot. Andrew Beck, who the Broncos claimed off waivers during the 2019 season, carved out a very unique role for himself once former Broncos fullback Andy Janovich went down with an injury and now remains one of the players standing in Butt’s way of having a role in this offense.

Beck’s role last season was essential, as Janovich was one of the biggest contributors to the Broncos’ success in running the football. However, with new offensive coordinator Pat Shurmur at the helm, the need for a fullback has been nearly eliminated. This means that Beck has to prove that he is the better all-around tight end than Butt. While Beck may be the better in-line blocker, Butt has shown that he can be physical at the point of attack and remains the better receiving threat of the two. If Butt can stay healthy and show consistency in his blocking, he has a solid chance of earning the fourth tight end spot.

Royce Freeman finds himself on the roster bubble

Royce Freeman was once considered to be the Broncos next premier running back but was quickly out-staged by the electric Lindsay. Freeman has had his fair share of struggles but has yet to face the uphill battle likes he’s currently encountering at training camp. After signing Melvin Gordon in free agency to complement Lindsay, Freeman’s role in the offense was diluted instantaneously. While the team released Freeman’s biggest competition for the third running back slot in Khalfani Muhammad, his fight to stay on the roster is not over just yet.

Is Freeman competing with another undrafted free agent?

A new-look Freeman is still trying to prove his value to the team despite the Gordon addition into the backfield. Freeman came into camp looking slimmer and more rocked up, almost comparable to Gordon. While this slimmer Freeman may fit better in Shurmur’s offense, he still finds himself battling for an opportunity to showcase his third-round talent.

Undrafted rookie LeVante Bellamy out of Western Michigan is looking to compete with Freeman for that final running back spot. Bellamy comes to the Broncos as a very similar runner to what Freeman was at the University of Oregon. He’s a bigger back with 4.5 speed and has great explosion out of the backfield. Bellamy scored over 20 touchdowns in the 2019 college football season and was a contributor as a receiver out of the backfield, something that Shurmur’s offense requires out of its running backs.

It’s obvious that Lindsay and Gordon will be the main focus of the running game, so that means that the back behind them has to be able to contribute on offense, as well as special teams. If Freeman can exhibit his ability to work accordingly inside the Broncos’ offense, while filling a role on special teams, he will likely take himself off the bubble and back up Gordon and Lindsay in the upcoming season.

The last player we’ll highlight in this piece is one that Broncos Country seems to count out quite a bit. DaeSean Hamilton was considered to be one of the better route runners of the 2018 draft class and was slotted to be the complement to his fellow receiver draft pick, Sutton, as the team moved on from Demaryius Thomas and eventually, Emmanuel Sanders. However, Hamilton struggled through his first two seasons, facing some drop issues. As a result of doing so, then-starter Joe Flacco ignored Hamilton for the better part of his starting stint in Denver.

However, later on, in that season, Hamilton started to get the attention of rookie quarterback Drew Lock and showed the flashes of why he could be a quality contributor in the Broncos’ offense. Hamilton gets decent enough separation on his routes, but his biggest problem was his consistency of catching the football. In training camp, Hamilton has made big catches, including his reps in red-zone drills, showing that he may have finally broken through. But ultimately, Hamilton still remains a work in progress and that’s why he’s still considered to be one of the Broncos’ offensive players on the roster bubble for the 2020 season.

What could Hamilton’s role look like in the Broncos’ offense?

If Hamilton continues this streak of good play into the regular season, he could end up having a solid role in the Broncos offense. Competing in a deep receiver room will be challenging, especially with the likes of Fred Brown, Diontae Spencer, Juwann Winfree, and 2020 draft pick Tyrie Cleveland fighting for a spot. But Hamilton could have a role that beats out all those players when the team finally breaks camp. Of his 58 career receptions, 35 of those catches have resulted in a first down. That would be his role: the “move the sticks” receiver.

Hamilton likely won’t be a 100 receptions, 1,000 receiving yard receiver, but if he can consistently catch the ball and be a key target on third downs, there’s no way the Broncos let him walk. While a lot of the receivers mentioned above have skills that the Broncos could use on offense, Hamilton could be the receiver that is the most valuable to the team. Converting on third downs is crucial to sustaining quality drives and with all eyes on Sutton and rookie Jerry Jeudy, Hamilton can work his way into being the guy that sleeps through the cracks of opposing defenses. 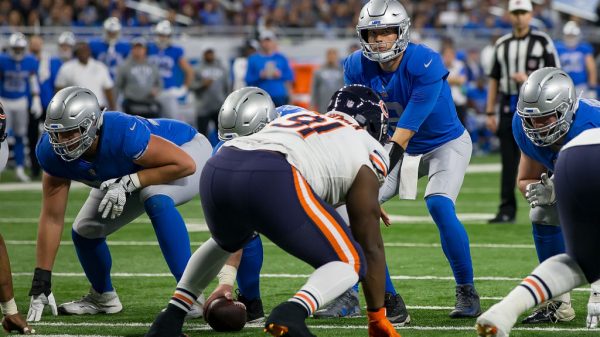 Who plays in the NFL's annual tradition of Thanksgiving Day games, and what times on your local channels can you watch the games? 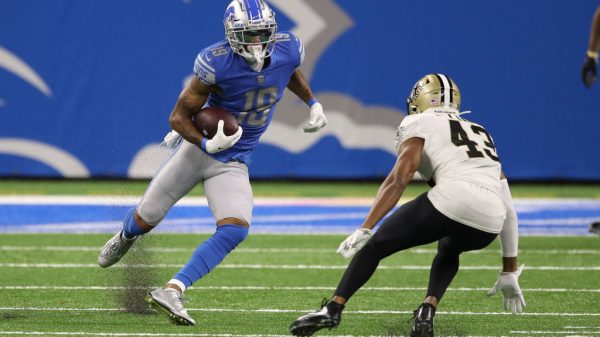 Kenny Golladay Injury Report: Is he playing this week?

Heading into their Thanksgiving Day game, is Lions' WR Kenny Golladay playing this week or will his hip injury force him out again?