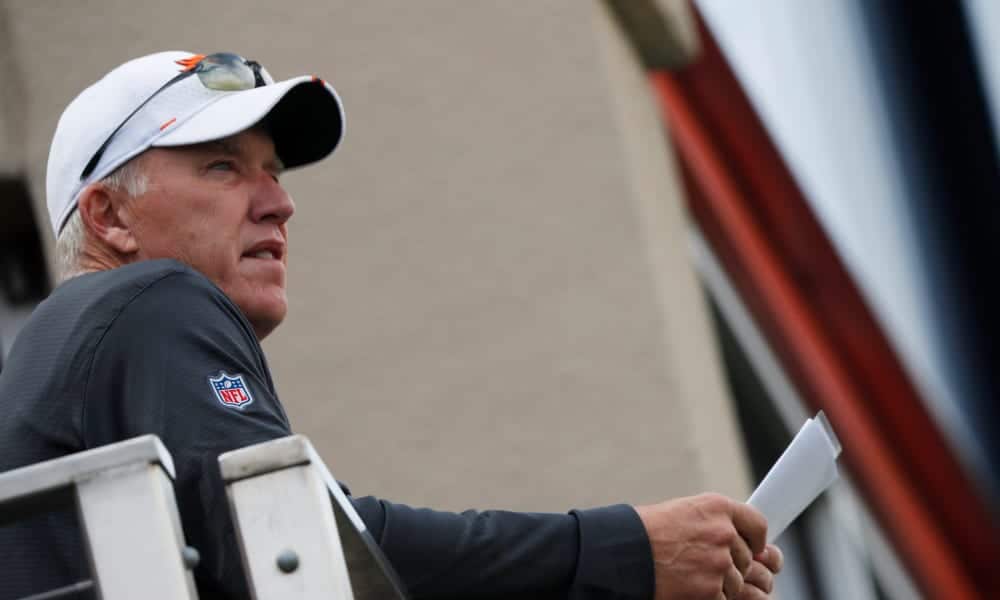 The man who led The Drive and numerous other late-game heroics may be on the verge of something special once again with the Denver Broncos evident rebuild ahead of 2020. We may very well witness another comeback led by Broncos General Manager John Elway. After years of draft pick flubs and rough free-agent signings, the Hall-of-Fame QB and the teams’ current general manager looks to lead Denver to another victory.

Featured | How will the Broncos utilize rookie tight end Albert Okwuegbunam in 2020?

Can the Broncos get back on track?

Since the Broncos victory in Super Bowl 50, the team has experienced a freefall and Elway has taken the brunt of the blame, for good reason. He never had a plan at quarterback after Peyton Manning retired. Brock Osweiler took the money and ran to Houston. The various other names of Trevor Siemian, Case Keenum, and Joe Flacco didn’t pan out and will be connected within this category of Broncos football.

Free agency and the draft had not gone much better for Elway and the Broncos after the 2015 season, up until the last several drafts. Noticeable whiffs like QB Paxton Lynch, defensive lineman DeMarcus Walker, an array of offensive lineman, receivers, and tight ends had set the team back.

Then you factor in questionable free-agent signings on the offensive line with Menelik Watson and Donald Stephenson. A one year experiment with Keenum. Elway had demonstrated the ability to be a star in free agency with key signings like Aqib Talib, DeMarcus Ware, T.J. Ward, and Emmanuel Sanders.

However, the microscope of the players that didn’t pan out for Denver grew larger and criticism about the need for a rebuild came up. For the Broncos, the word rebuild was never part of Elway’s vocabulary despite the route the team has taken ahead of the 2020 season.

After Gary Kubiak stepped down as the Broncos head coach after the 2016 season, the team embarked on the start of their decline. The team would then hire Vance Joseph shortly afterward to take control of the coaching reigns.

There were many questions about why the Broncos didn’t pursue Kyle Shanahan who was available at the time. In hindsight, the San Francisco 49ers head coach became the one that got away even though it had been reported that Shanahan was not under consideration for the Broncos head coaching gig.

The Broncos, who have been one of the more stable and winningest franchises in the NFL, were starting to become a bit of a laughing stock around the league. Under Joseph, the team would go a combined 11-21. This was unacceptable in the eyes of the fan base and the best QB in team history.

Even though the Broncos had finally embraced the rebuild before 2020, the real work began starting with the 2018 NFL Draft. The Broncos’ top two picks in that draft were linebacker Bradley Chubb and wide receiver Courtland Sutton. Both have been key parts of the Broncos rebuild the last two seasons leading up to 2020.

Chubb excelled as a rookie with 12 sacks in 2018 but he would go on to miss the rest of the 2019 season after tearing his ACL against the Jacksonville Jaguars in Week 4. Chubb had gotten off to a slow start but was able to register one sack before his injury.

Sutton displayed a pretty impressive rookie season, especially with Keenum throwing to him. He would finish 2018 with 42 catches and 4 touchdown receptions. In 2019, the NFL world would see Sutton take off. He made the Pro Bowl after tallying 72 catches for 1112 yards and 6 touchdown receptions. He also generated a strong relationship with a certain quarterback that will be mentioned later.

The 2018 draft class would signal a turning point for the Broncos. There were other pieces selected in that draft as well that would contribute. The team would select running back Royce Freeman in the third round, even though he may see a reduced role in 2020 due to the offseason signing of Melvin Gordon.

Three other players, cornerback Isaac Yiadom, linebacker Josey Jewell and wide receiver DaeSean Hamilton. These players are still part of the team but will be fighting for playing time in 2020. 2018 would be the year where Elway really started building for the future.

After a 6-10 finish in 2018, Elway would make the decision to part ways with Joseph and bring in Vic Fangio, who was previously the defensive coordinator for the Chicago Bears.

This would be the organizational move that would help accelerate Broncos’ desire to rebuild and reload ahead of the 2020 season. With Fangio now at the helm, the 2019 draft would be critical yet again for Elway and the front office.

In the first round of the 2019 draft, Denver selected tight end Noah Fant. For many fans in Broncos Country, the selection seemed to draw questions regarding the team’s choice to go with a tight end over an inside linebacker when the team already had several tight ends on the roster.

In his rookie season, Fant showed plenty of flashes. He had the unique opportunity to play with three different quarterbacks, which can be challenging for any player. He didn’t have as much success offensively with Flacco at QB, but Fant would go on to have two huge games in the second half of the season.

He would go on to finish the season on a strong note after a slow start. He appears to be the Broncos’ primary tight end for the 2020 NFL season.

Broncos have found some stars in the second round

The Broncos would have two selections in the second round after Elway traded up to have consecutive picks back to back. Offensive lineman Dalton Risner and Lock would be the team’s selections as potential superstars of the future. Risner would go on to be a day one starter in camp. His various levels of strength and versatility will make him a strong cog on the Broncos offensive line for years to come.

Now enter Lock. He would enter the Broncos starting lineup in Week 13 vs the Chargers after spending the first half of the season on injured reserve with a thumb injury. In his five games of action, he led the Broncos to a 4-1 record to close out the season. The one loss came at the hands of the defending Super Bowl champion Kansas City Chiefs in Week 15.

The organization hopes that he can be their franchise guy for many years to come. Lock has shown a lot of growth this offseason by orchestrating on-field workouts with his teammates and helping install the offense at a local Denver area park.

Lock may experience some struggles in 2020 acclimating himself as the starting quarterback full-time, but the organization has helped make it easy for him to succeed by surrounding him with various weapons offensively.

The future is bright for the Broncos

The Broncos draft class of 2020 hasn’t seen the field yet, but it demonstrates the faith Elway has in his young quarterback. With the key selections of wide receivers Jerry Jeudy and K.J. Hamler in the first two rounds, he’ll have plenty of options to throw to. You can also add in Lock’s favorite target at Mizzou to the mix with Denver’s selection of Albert Okwuegbunam in the fourth round.

When it comes to protection on the offensive line, the team drafted Lloyd Cushenberry from LSU in the third round. Responsible for keeping Heisman trophy winner Joe Burrow upright, Cushenberry projects to do the same for Lock ahead of training camp in July.

To go alongside the Broncos productive draft in 2020, their activity during free agency was strong on paper, but it will be interesting to see if the moves will be hit or miss. Elway orchestrated a trade with the Jaguars to obtain cornerback AJ Bouye and traded a 7th round pick away to the Titans to acquire veteran defensive lineman Jurrell Casey.

Some of the other biggest signings of the 2020 offseason included right guard Graham Glasgow, who will be paired with Cushenberry and Risner on the team’s interior offensive line. Gordon was the other key signing that will be the team’s feature back along with Philip Lindsay. Not to mention the team was able to re-sign DL Shelby Harris on a cheap 1-year deal.

The Broncos are still waiting to see what they will get from some of their other free agent signings from the 2019 season. Offensive tackle Ja’Wuan James only played 63 snaps in 2019 and cornerback Bryce Callahan sat out last season with a broken screw in his foot. Both players will be counted on this upcoming season.

Are the Broncos back to being dominant like they were during the Manning years? Not quite, because there are still a lot of questions about the team’s young core on offense. Elway’s motto has always been “win from now on” and this team is set up to do that.

The general manager with ice in his veins is down six late in the fourth quarter but has Denver 10 yards away from a touchdown. Can the Broncos punch it in this season and secure a playoff berth for the first time since 2015?

With what we all know about Elway’s past, the odds are in the Broncos favor.