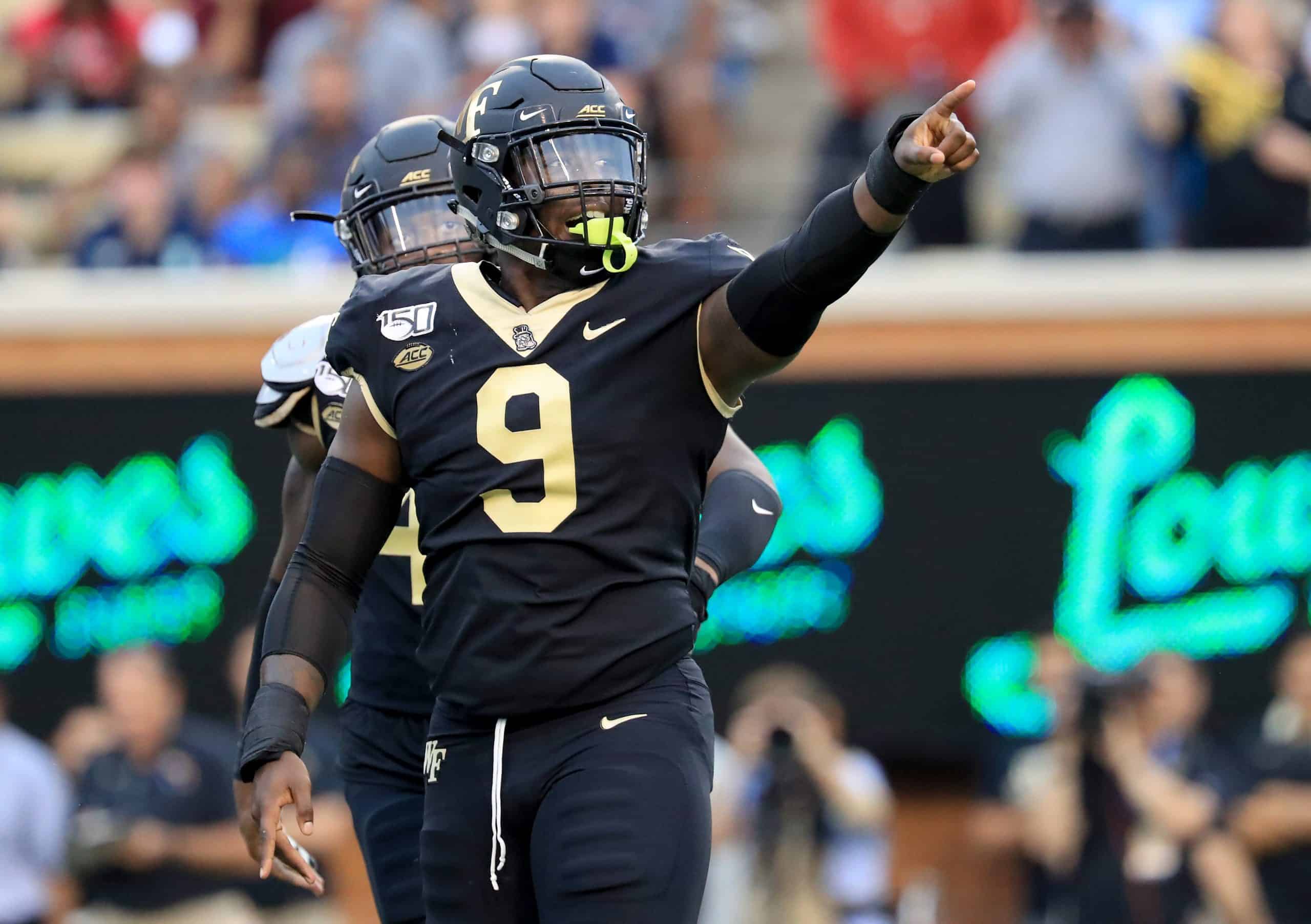 About once a week, a very nice gift drops from the clouds and into my email inbox. The college football All-22 starts flowing, and it gets my juices going. Unfortunately, due to the fingernail-pulling process of acquiring this tape, it’s impossible to do these breakdowns in a timely manner. But that doesn’t make them any less important, particularly when you’re looking at a Wake Forest defense that has some NFL draft prospects versus the Clemson offense, which has a plethora of talent.

Biggest takeaways from Demon Deacons versus the Tigers

Trevor Lawrence has a howitzer

This young man’s arm is special. Some of the placement he showed throughout this contest was mindboggling, particularly when pushing the ball downfield with pace. It’s easy to throw catchable passes downfield when there is air underneath the ball, and a receiver is able to adjust. It’s another thing to uncork a 35 cross-hash corner route on a rope to an outstretched Amari Rodgers.

Although he didn’t use his legs much in this game, he still showed what a weapon his athleticism is as he trotted in touchdowns on two separate occasions. Maybe someday, when college football stat collection stops accounting sacks as rushing yards, we’ll all join the 21st century. But that is partly an issue when it comes to his rushing yard totals. Lawrence took three sacks throughout the game, and two of them were avoidable.

Etienne also looks more complete, too. We’ve all known of his uncomfortable nature when catching the football. He’s brought up in the past that it makes him “nervous” at times. As a runner, his acceleration and ability to carry speed through bend makes even the most obtuse angles obsolete.

After the catch, Etienne is one of the more dangerous players in all of college football. His blend of vision, balance, speed, and change of direction makes him a difficult target in the open field on screen passes.

He’s such an interesting case. In the modern NFL where quarterbacks are continuously getting the ball out quicker and quicker, it’s difficult to stand on the table for a 280-pound edge rusher that’s not a physical phenomenon. There’s a very good chance I learned that the hard way with my adoration for Iowa’s A.J Epenesa.

So it’s a bit surprising to see so many so high on a 275-plus pound defensive end without a ton of juice. What’s even more confusing is that he doesn’t display the same devastating hands that Epenesa had at the college level. But Basham is still a good football player, and he showed that against Clemson.

He moved up and down the defensive line against the Tigers offense, and although from a pure pass rush perspective, he didn’t make a huge amount of difference on the stat sheet, he helped the team get some pressure on Lawrence.

On one rep where Lawrence broke the pocket and rolled right early in the game, Basham showed that, when able to have a runway, he can close the gap quickly. He ended up with a sack on that broken play. With his frame and strength, he’s a very nice chess piece to use playing games along the defensive line. On another play later in the game, he slanted inside and allowed the backside defensive tackle to loop around and secure another sack on Lawrence.

There are actually three possibilities here between Ryan Smenda Jr, Ja’Cquez Williams, and JaCorey Johns, but Johns is only a redshirt sophomore, so we’ll let him have a year and decide how he feels about the NFL before we dive too deep into his film.

Smenda Jr. was the first linebacker that caught my eyes, but not necessarily for the right reason. His base, both pre-snap and in his slide, is hilariously wide, and it really hurts his ability to hinge and turn when necessary. The young man’s flashes came when he was given the go ahead to rush the passer. When it comes to proactive athleticism, he can dart a bit side to side and throw a few rush moves together to come free.

His ability to run with tight ends and non-Etienne backs in coverage seemed adequate as well. He darted back in coverage after getting initial run reads. He showed some decent awareness in these situations. But the most disappointing part of his game was the lack of pop he played with in his pads as he took on blocks. He was exceedingly passive when blockers approached, which is something you don’t want to see from the inside linebacker.

Williams was a pleasant surprise. He is an interesting fit as an NFL prospect, and his postseason testing will have a lot to do with how teams look at him. He’s not the biggest player at around 220 pounds, but he is still all over the field inside the box playing against the run. He missed an open-field tackle against Etienne, but I thought he was an energizing presence in this game. He also aligned as a traditional outside linebacker and was responsible for playing the APEX in coverage, which had him everywhere playing the pass.

This was a tough watch at times. I liked some of the physicality he played with throughout the contest, but his mental approach in coverage got him beat physically on multiple occasions. Lawrence was able to throw a touchdown to an open Smash concept, as the slot receiver ran a Corner route and the outside receiver broke off quickly on a hitch. When that happened, Williams drove on the hitch because Greer was supposed to drive vertically once the hitch broke.

There was another instance when he had outside leverage on a receiver while playing the right cornerback spot where he drove hard to cut off the post, while still allowing space underneath so he didn’t have to overcommit, just to be beaten by a blaze out, leaving the single receiver wide open for a nice gain toward the sideline.