Bradley Chubb and the Denver Broncos defense came to play, as they got their first victory of the season, on Thursday night in primetime. The game served as a new high-water mark for several different parts of the roster, but that was especially true of the defense, who played lights out, though that isn’t reflected by the scoreboard. The pass rush was constant and the coverage downfield was tight throughout the game.

Bradley Chubb bounces back against Jets

Much like this year, the Broncos’ pass rush got off to a slow start in 2019. They finally got their first sack of the season in Week 4, when Bradley Chubb brought down Gardner Minshew. Chubb later left that game with a torn ACL, and wouldn’t record another sack until 2020’s Week 4 game against the Jets.

Chubb went off, in what seemed like an effort to make up for lost time, as he was unblockable all night long. He tallied two and a half sacks and five quarterback hits, which was almost half of the Broncos’ overall pass-rush production, and it could’ve been even more.

With Mekhi Becton demoted to an emergency backup role, Chubb first squared off against backup tackle Chuma Edoga. He quickly victimized Edoga on a rep that saw Chubb land the first hit of the game on Sam Darnold, as the Jets’ backup tackle went back to the sideline with a shoulder injury. Edoga was then replaced by the already injured Becton, who didn’t last long before he was replaced by Jets center and former Bronco, Connor McGovern.

The revolving door at left tackle set the stage for Chubb’s terrific night and a great performance from the rest of Denver’s pass rush as well. After generating just nine quarterback hits and three sacks in their past two showings, the Denver pass rush mutilated Sam Darnold to the tune of six sacks and 10 quarterback hits.

Following the injury to A.J. Bouye early in the Broncos’ Week 1 loss to the Tennessee Titans, rookies Michael Ojemudia and Essang Bassey were attacked heavily by every offense they went up against. Through three weeks, the duo had been targeted a combined 28 times and allowed 18 receptions for 241 yards and three touchdowns.

That’s more than a quarter of the offensive production the Broncos allowed through the air during that span.

Ojemudia got his revenge though tonight, as he made several big plays for the Broncos, including a pass breakup, which would have been two if not for a pass interference penalty that had no business being called. The play the penalty came on, was actually one of Ojemudia’s best plays of the night, and another came at the goal line against Chris Hogan, where Ojemudia did a perfect job of running the route, and nearly had an interception that would have taken points off the board for the Jets.

Bausby made is true season debut on Thursday night, despite already being on the active roster for a few weeks, because we wasn’t used on defense until Denver’s Week 4 win. Bausby was surprisingly cut by the Broncos back in August before being re-signed to the team’s practice squad and promoted to the active roster following the slew of injuries, and he played incredibly well last night.

Since Bouye’s injury, Ojemudia and Callahan have been Denver’s perimeter cornerbacks, and Bassey has started in the slot. With Bassey being the Jets’ primary target in the first half, he was benched at halftime, and Bausby started the second half in his place, seizing his opportunity. In the second half alone, Bausby broke up three different passes (which led the team) and had the opportunity to take one of those breakups to the house had he held onto the would-be interception.

If Bausby stays in the lineup, Denver’s defense and secondary should be a whole lot better moving forward.

The Broncos’ starting safety tandem of Justin Simmons and Kareem Jackson might have been the best in the National Football League in 2019, but they’ve been far from that mark this season, and it has cost the team.

In Week 1 against the Titans, Simmons allowed a perfect completion percentage and a perfect passer rating when targeted in coverage, and nearly did so again in Week 3, when Tom Brady completed all five of his attempts for a passer rating of 155.4 with Simmons in coverage.

With his struggles against the Titans and Buccaneers noted, Simmons did play well in Week 2 at Pittsburgh, holding opposing receivers to just nine yards on five targets with Simmons in coverage, and he also came away with his first interception of the season.

Quarterbacks have experienced a similar rate of success when targetting Simmons’ co-star Jackson in coverage this season. On the season, Jackson had allowed 80 percent of his targets to be completed and a touchdown to give opposing quarterbacks a passer rating north of 120 with him in coverage.

Jackson and Simmons had another ugly moment on Thursday night, though this time it came on the ground. On the Jets’ first drive of the game, Sam Darnold shook off an Alexander Johnson sack and began to scramble. Simmons and Jackson were two of the only players standing in Darnold’s way.

Simmons dived at Darnold and tried to make the tackle, but the New York quarterback easily ran through the arm tackle and shook Simmons off, harmlessly to the ground. Jackson, on the other hand, didn’t even make the attempt to tackle Darnold in open space, despite being in position to do so and being one of the last remaining barriers between him and the endzone.

On Thursday night, Simmons and Jackson were better in coverage but combined to allow four receptions on five targets for 45 yards while in coverage. Jackson and Simmons are almost the only two healthy stars left on the Broncos roster, and they have to play like it to keep this team afloat. 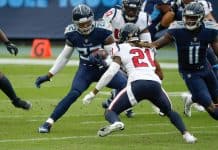 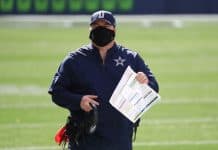