It's Week 4 and the Broncos are starting their third QB. Can Brett Rypien's RAS give insight on how he can succeed against the Jets?

By Zachary Knerr
October 1, 2020
What's in this article? Click to show
Boise State big shot
What does Rypien’s RAS say?
A glimpse of the gameplan

Injuries are running rampant throughout the league in 2020, and one team seeing a plethora of changes to the depth chart due to players going down is the Denver Broncos. While both the offense and defense have taken noticeable hits, the quarterback position, in particular, will now see its third starter in four weeks. With the Broncos handing the reigns over to a new signal-caller in Drew Lock’s absence, can Brett Rypien’s RAS help Denver form a gameplan for the second-year QB to succeed?

Rypien started all four years of his college career with the Boise State Broncos, finding a lot of success. He ended his career as the Mountain West’s all-time leader in completions (1,036), 300-yard passing games (21), and passing yards (13,581). Rypien’s 21 300-yard passing games also passed Kellen Moore for the most in Boise State history. He was named Mountain West Offensive Player of the Year during his senior season in 2018 and Mountain West Freshman of the Year in 2015.

Rypien also received All-Mountain West first-team honors in 2015-16 and 2018 while receiving second-team honors in 2017. His name popped up on the Maxwell, Walter Camp, and Davey O’Brien award watch lists after his freshman season and saw a decent amount of buzz heading into a 2019 QB Draft class, which offered more question marks than answers at the time. How was this four-year college prospect going to fare in the NFL?

What does Rypien’s RAS say?

For those not familiar with Relative Athletic Score, RAS is a metric and analytics system which takes player measurements and puts them on an easy to understand zero to 10 scale compared to their position group. The NFL Combine and College Pro Days produce a final score on a zero to 10 scale, to show overall athleticism for a draft prospect. 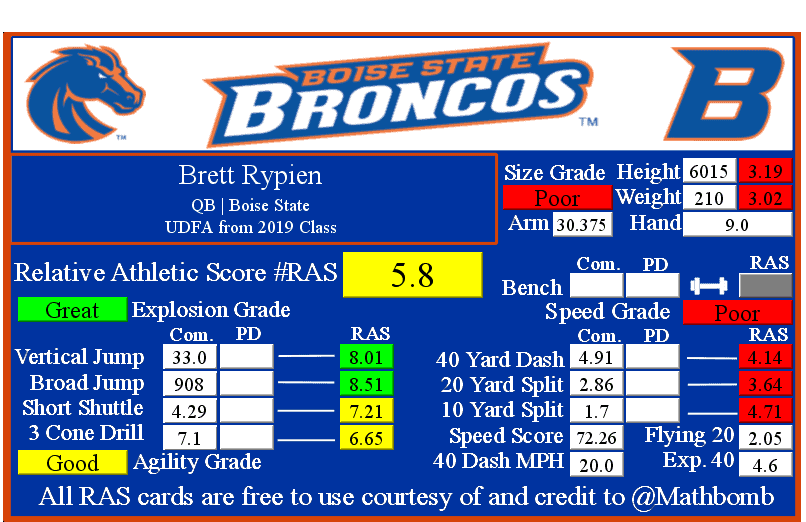 At first glance, Rypien’s overall RAS looks pedestrian at best; however, that score takes a hit in two areas: size and speed. Rypien recorded a height of six feet, 1 and 5/8 of an inch, and weighed in at 210 pounds in the 2018 season. Based on his weight, Rypien had a projected 40-yard dash time of 4.6 seconds. This time was found by multiplying 0.00554 by his weight and adding 3.433.

On the smaller end of the spectrum for the 2019 QB Draft class, Rypien saw RAS scores of 3.19 and 3.02 for height and weight, respectively, in the lowest area of his RAS card and poor Size grade.

At the combine, he recorded a 4.91-second 40-yard dash, 0.31 seconds slower than his projected time, correlating to a 4.14 score out of 10, leading to a poor speed grade. That’s where the negatives end, though. His poor speed is saved by his great explosion and good agility. Rypien put up a 33-inch vertical jump and broad jumped nine feet and eight inches earning him RAS scores of 8.01 and 8.51.

He tested better than average in agility and ran the short shuttle in 4.29 seconds and the three-cone drill in 7.1 seconds. All these measurables stack up to the tape Rypien produced in Boise. While undersized, Rypien has a great football IQ and can see the field well to manipulate safeties. His arm is good enough, but not the strongest. The key here is that he knows his limitations, and while he can be reckless at times, he’s going to get the ball out quickly while giving his receiver an accurate and catchable ball.

He’s a pocket passer, and his poor speed sets some limitations as far as his ability to tuck and run. But Rypien’s explosion and agility allow him to manipulate the pocket with his feet. He shows excellent poise under duress, standing tall in the pocket, remaining calm in the face of pressure. The Broncos signed Rypien as an undrafted free agent after the 2019 Draft.

A glimpse of the gameplan

While Week 4’s Thursday night tilt with the New York Jets will be his first start, the strengths of Brett Rypien’s RAS were on display on the last drive of Denver’s Week 3 28-10 loss to the Tampa Bay Buccaneers. The drive ended in disaster with Rypien throwing an interception in the endzone, but this was after completing the first seven passes of his career to work the Broncos offense into the red zone after coming off the bench.

The Broncos got to figure out how to win with Rypien before he started a game. He gets the ball out quickly, working it all across the field but finding the open man. After establishing some rhythm and rapport with his receivers and completing some underneath routes, he calls out the incoming blitz from Antoine Winfield Jr., which sets up a nice 22-yard catch and run for rookie WR Jerry Jeudy.

It was clear after two weeks that Jeff Driskel was not the answer at QB for the Broncos while they await Lock’s return from a sprained AC joint in his throwing shoulder. Recently signed QB Blake Bortles is not ready as of yet, and the other two starting QBs from last season, Joe Flacco and Brandon Allen, are no longer with the team, so all signs pointed to Rypien for the start in Week 4. Denver can rest somewhat easy knowing their QB gets his first start against one of the worst teams so far this season.

If the Broncos allow Rypien to get the ball out quickly and allow him to establish a rhythm early on, the second-year QB could produce a surprising performance with the intangibles he possesses.