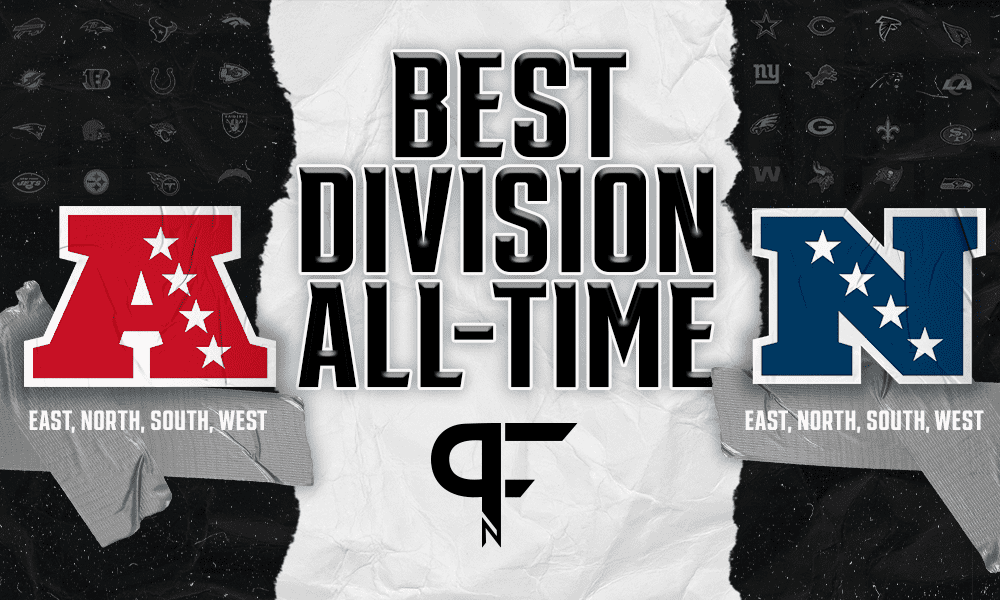 Throughout NFL history, we have seen several divisions labeled the best at any given time. Looking back across the league’s history to the NFL-AFL merger, which division takes the crown as the very best? The best division is judged on its overall record and how many teams qualified for the playoffs.

Which divisions land in the top nine in NFL history?

A .550 record was relatively unimpressive from the AFC East in 1998. However, the division record is somewhat harpooned by the 3-13 record of the Indianapolis Colts. The other four teams finished 9-7 or better, with three teams winning double-digit games.

This division stands out among the best in NFL history because they sent four teams to the playoffs in 1998. While impossible now (with just three divisions in 1998), one division could make up four of the six playoff teams. To do so is extremely impressive, even if none of those teams made it to the Super Bowl. The New York Jets had the best finish, losing in the AFC Championship Game to the Denver Broncos.

Much like the AFC East in ninth place, the NFC Central does not have the most impressive overall record. Yet, they also sent four teams to the playoffs in 1997. It was the third time the division saw all four franchises represent in the postseason and the second in four seasons. For context, one division has sent four teams to the playoffs a total of four times since the merger. The NFC Central achieved that feat on three of those occasions.

The ultimate glory would escape the division, unfortunately. The Green Bay Packers lost in the Super Bowl, narrowly missing out on back-to-back championships.

While the 2008 NFC South only sent two teams to the playoffs, it goes down as one of the best in NFL history for having all four teams finish with an 8-8 or better record. The Carolina Panthers led the division at 12-4, with the Atlanta Falcons at 11-5. Narrowly behind them were the Tampa Bay Buccaneers at 9-7 and the New Orleans Saints at 8-8.

Unfortunately, the division is not considered higher among the best divisions in NFL history due to the two teams not winning a single playoff game. Additionally, both franchises lost to a 9-7 division winner in the Arizona Cardinals. Arizona came out of one of the worst divisions of all time statistically.

Our first mention of the NFC East also gives us our first Super Bowl winner on this list in the New York Giants. The 2007 season is best remembered for the Giants ending the Patriots’ perfect season in the Super Bowl. What is not discussed is just how good the NFC East was that season.

The Dallas Cowboys won the division at 13-3 — ahead of the Giants (10-6) and Washington (9-7). The fourth team in the division was the Eagles at 8-8. Therefore, all four teams finished at 8-8 or better that year. The Giants defeated the Cowboys in the Divisional Round on their way to winning the Super Bowl.

Sending four teams to the playoffs in 1998 was not enough for the AFC East, so they sent another three teams in 1999. Incredibly, all five teams finished 8-8 or better at the end of the regular season. The Colts bounced back from a disappointing 1998 campaign to finish atop the division at 13-3. In the 1999 season, the New England Patriots and New York Jets failed to make the playoffs from this very competitive division.

The AFC Central made up 50% of the AFC playoff teams in the 1975 season. Even more impressively, the division returned a .643 winning percentage overall, despite the Cleveland Browns going 3-11. The remaining three teams won over 10 games when the NFL season averaged just 14 games. To further cement the legacy of this division among the best in NFL history, the Pittsburgh Steelers would go on to win Super Bowl X, defeating the Cowboys.

The 1984 AFC West stands out because they sent three teams to the playoffs in an era where the playoffs contained just five teams in each conference. Unfortunately, none of them would progress past the Divisional Round. Regardless, making up 60% of the playoff teams in the conference is impressive.

While generally viewed as the best division in NFL history because it produced the two teams that played in the NFC Championship Game, the 2013 NFC West just misses out on the crown.

Firstly, despite sending the San Francisco 49ers and Seattle Seahawks to the NFC Championship Game, they were the only two in the playoffs. Additionally, the Los Angeles Rams let the division down by finishing 7-9. Therefore, the division falls under the bar of all four teams being 0.500 or above. The forgotten team in this division from 2013 is the Arizona Cardinals, who went 10-6 and narrowly missed the playoffs.

What is the best division in NFL history?

Which division tops the list as the best of all time in NFL history?

While the 2007 AFC South did not send any teams to the Super Bowl, or even the AFC Championship Game, they did send three teams to the playoffs. The Indianapolis Colts led the division at 13-3, earning the No. 2 seed. The Jacksonville Jaguars and Tennessee Titans finished with double-digit wins at 11-5 and 10-6.

However, what clinches the place for the AFC South at the top of this list is the Houston Texans at 8-8. Having all four teams at 8-8 or better is a phenomenal season and one of the best statistically that we have ever seen since the NFL-AFL merger.