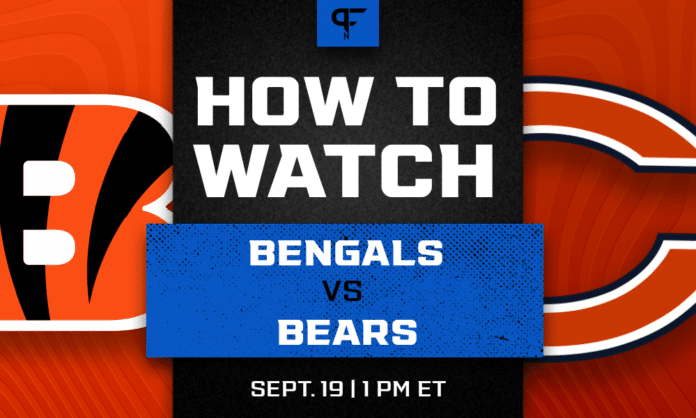 Bengals vs. Bears odds, line, prediction, and how to watch the Week 2 game

What are the Bengals vs. Bears odds and prediction, what channel is the game on, and how can you stream the Week 2 matchup?

On paper, the Cincinnati Bengals vs. Chicago Bears matchup has more potential than just Andy Dalton going against the team he spent nine seasons playing for. The Bengals came away victorious at home in overtime last week, while the Bears looked unprepared on national TV Sunday night. Let’s take a look at the current NFL odds, a prediction for the game, the TV channel, and how to live stream the Bengals vs. Bears Week 2 game.

Cincinnati Bengals vs. Chicago Bears odds and prediction for Week 2

It’s been a while since we saw a Bengals vs. Bears matchup, with the last one taking place in 2017. Since the Bengals and Bears find themselves in opposite conferences, it’s not a matchup we see often. Overall, the two franchises have met 11 times, with the Bengals leading the series 6-5. However, the Bears have won the past two games, including in 2013 at Soldier Field.

A lot of underdogs won in Week 1, including the Bengals. Using home-field advantage, they were able to use a field goal in overtime to beat Minnesota. The Bears were dogs coming into their opener as well, but against a Super Bowl favorite like the Los Angeles Rams, few held out hope the Andy Dalton-led Bears would pull out a surprise victory.

The Bears are who we thought they would be, specifically on the offensive side of the ball. While their defense gave up 34 points to the Rams on Sunday night, head coach Matt Nagy and Chicago’s offense looked out of rhythm. Quite honestly, that’s no different than what we saw throughout the preseason. The one exception, of course, was when rookie quarterback Justin Fields was in the game.

Speaking of Fields, he was one of two Bears players to score in Week 1 — even though he wasn’t a starter and played only 5 snaps. Things could be utterly different in Chicago if Nagy named Fields the starter, but as of right now, he hasn’t.

Unlike the Bears, the Bengals have their best quarterback under center. Coming off a torn ACL and MCL less than a year ago, quarterback Joe Burrow looked cool in the pocket in Week 1 against Minnesota. Kudos to head coach Zac Taylor who called a conservative gameplan, leaning heavily on running back Joe Mixon against Minnesota’s defense. With Burrow not seeing time throughout the preseason, Mixon’s legs kept the Bengals competitive throughout the game while Burrow got back into game speed.

Matchups to watch between the Bengals and Bears

While most people will want to watch the Burrow/Ja’Marr Chase connection offensively, it’ll be the Bengals’ defensive front that should get the attention. Against the Vikings in Week 1, they combined for 3 sacks — 2 via B.J. Hill and 1 via Larry Ogunjobi. However, Sam Hubbard and 2021 free-agent signee Trey Hendrickson wreaked havoc throughout the entire contest. Going up against a Bears offensive line that gave up 3 sacks of their own, Cincinnati’s defensive line could be the difference in what should be a close matchup.

The Week 2 NFL odds for the Bengals vs. Bears currently have the Bears as favorites. Expect that to be the case with the game taking place at home. If Fields is the starter, it should open opportunities up offensively, but don’t expect any fireworks as long as Dalton remains QB1 in Chicago.

How to watch Bengals vs. Bears this week