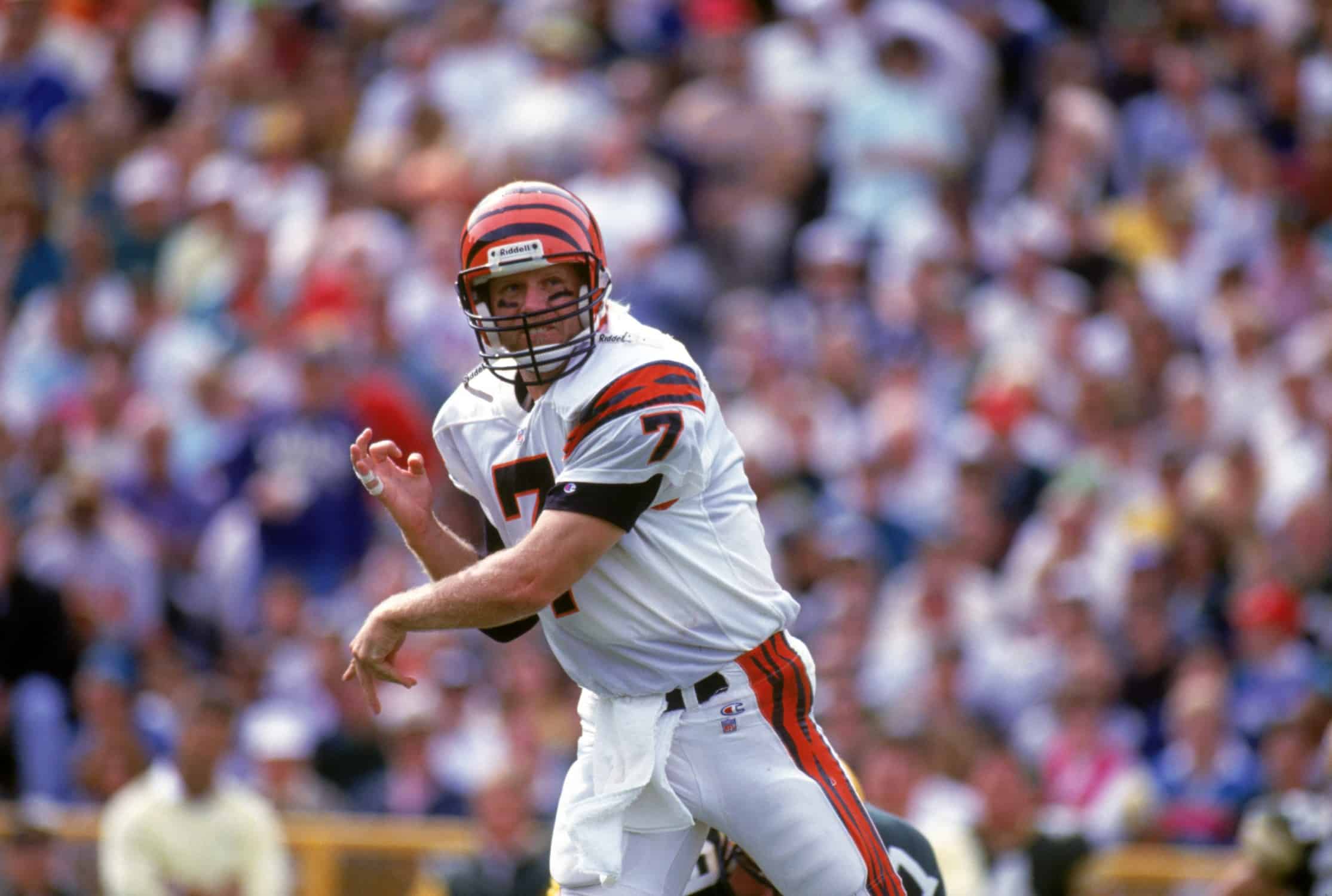 The 1990s are known as “the lost decade” for the Cincinnati Bengals. After team founder Paul Brown’s death in 1991, the team fell into a decade-long funk, mustering just 52 wins in ten seasons. Coaches came and went. The team shuffled through numerous quarterbacks. But there was one magical half-season that offered fans a glimmer of hope: 1997.

It was a season to remember for a number of reasons. The year marked the team’s 30th anniversary as a franchise. The Bengals unveiled new uniforms and a new set of logos, freshening up an arguably outdated look. But more than this, 1997 marked the return of quarterback Boomer Esiason and one of the most memorable finishes to a season in team history.

To understand the gravity of Esiason’s return, you must first know the story of Jeff Blake. The importance of his imprint on the city of Cincinnati cannot be discounted. Blake began the 1994 season as an unknown backup quarterback and pet project of offensive coordinator Bruce Coslet. After an 0-7 start, the man who replaced Esiason as the Bengals anointed franchise QB, a struggling David Klingler, went down with an injury. Blake entered the game and potentially changed the future of the franchise. In nine starts he threw for 2,154 yards, 14 touchdowns, and 9 interceptions and managed to scrape together three wins.

More importantly, Blake energized a city desperate for excitement on the field and facing a tax referendum for a new stadium to keep the team in Cincinnati off it. In some ways, you could call Paul Brown Stadium the house that Jeff Blake built. The following year he made the Pro Bowl and in 1996 Blake led the Cincinnati Bengals to a promising 8-8 record, the team’s best finish since 1990.

So when Boomer Esiason was signed in the 1997 offseason, the team didn’t envision his role to be anything more than a backup quarterback and mentor to Blake. The veteran was coming off a one-year stint with the Arizona Cardinals where he started just eight games, whereas Blake looked like a star on the rise. However, things were not always what they seemed during the lost decade in Cincinnati.

The Bengals won their 1997 home opener and it looked like Blake was ready to take the team back to the playoffs after a seven-year drought. Then Cincinnati inexplicably lost seven games in a row, essentially ending their playoff hopes. Blake would manage two more wins, but the damage was done. In Week 13 head coach Bruce Coslet would make a change at the QB position. Boomer Esiason was once again the Bengals starting quarterback.

The change sparked a five-game stretch that would be memorable on multiple levels. In Esiason’s five starts the Bengals went 4-1. The brash QB turned back the clock and played like it was 1988 when he was named the NFL’s MVP. Through his first four games, the Bengals averaged 36 points-per-game. In a rare prime-time home game against the Tennessee Oilers in Week 15, rookie running back Corey Dillon ran for 246 yards and four TD’s, breaking Jim Brown’s 40-year old rookie single-game rushing record. The team routed the Oilers 41-14. Cincinnati had become a team that could compete with anyone in the league.

Esiason would finish the season with 1,478 yards, 13 TD’s, and just 2 interceptions. Of all the yards and scores, it was his last pass of the year that would be the most memorable. In the final game of the year at home against the division rival Baltimore Ravens, Esiason would go out in storybook fashion. In the fourth quarter with the Bengals up just three points, Esiason threw a 77-yard TD pass to wide receiver Darnay Scott, pulling the Bengals away from the Ravens for good. It was the final pass of Esiason’s career.

Esiason appeared to change the fortunes of the team, leading the Bengals to a 7-9 finish after a 1-7 start. He was surrounded by young talents like Dillon, Scott, and receiver Carl Pickens. The glow of nostalgia was strong and the future in Cincinnati looked bright. Then Monday Night Football came calling, offering Esiason a broadcasting contract that team owner Mike Brown refused to match. Esiason retired to the broadcast booth and the Bengals were back to square one at quarterback.

Despite a vote of confidence in Blake from Coslet, Brown had lost faith in the embattled quarterback and began moving in another direction. It began a carousel at the quarterback position that wouldn’t end until Carson Palmer was drafted first overall in 2003. The carousel included a turnstile of names like Neil O’Donnell, Scott Mitchell, Akili Smith, Gus Frerotte, and Jon Kitna.

The lost decade would continue into the new millennium. The Cincinnati Bengals wouldn’t top 1997’s seven-win total until 2003 when they finished 8-8. Bengals fans don’t have a lot of fond on-field memories from the 1990s, but Boomer Esiason’s return to the Queen City and improbable finish to the 1997 season stands out as one of the few magical moments from the lost decade.

-Travis Yates is a writer for PFN covering the Cincinnati Bengals. He’s also a co-host of the AFC North & Goal Podcast as a part of the PFN Podcast Network. You can follow him @TheTravisYates on Twitter.-