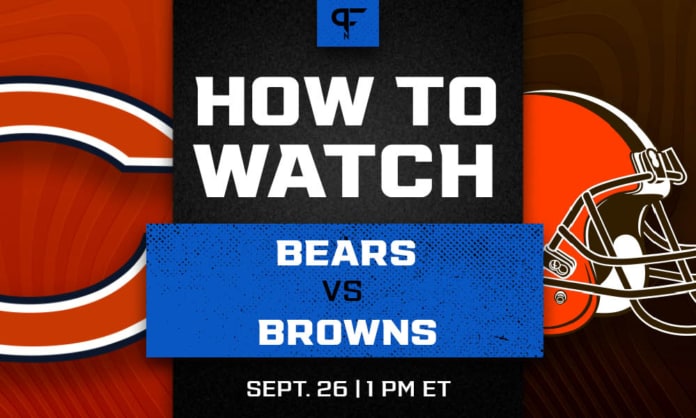 What are the latest lines, odds, and predictions ahead of the Bears vs. Browns matchup, and on what channel can you watch the game?

Sunday’s Chicago Bears vs. Cleveland Browns game features two 1-1 teams aiming to get above .500 for the first time this season. Let’s look at the current lines and NFL odds, a prediction for the game, the TV channel, and how to live stream the Bears vs. Browns Week 3 NFL game.

Chicago Bears vs. Cleveland Browns prediction and odds for Week 3

According to reports on Monday, Andy Dalton avoided an ACL tear during Chicago’s 20-17 victory over the Bengals on Sunday. Matt Nagy then clarified that Dalton is the starter if he is ready to go this week. However, on September 22, Justin Fields was named the starter for Week 3.

Chicago’s defense was the key to their victory in Week 2. The Bears turned the ball over 4 times and held the Bengals to just 17 points. Anyone who has watched the Bears in the last few seasons will be unsurprised to hear that their success so far in 2021 has primarily hinged on the play of their defensive unit.

The Browns avoided a big letdown game in Week 2

After losing a close one to Kansas City in Week 1, Cleveland’s Week 2 matchup with Houston was always going to be a potential letdown game. They avoided a loss to the Texans, but the Browns’ Week 3 matchup vs. the Bears falls into a similar category. While the odds have Cleveland favored by a touchdown against Chicago, it would be wrong to completely dismiss the Bears in this week’s prediction.

The Browns also narrowly avoided losing Baker Mayfield to an injury. All eyes were on Mayfield after he left the field holding his shoulder. Thankfully, Mayfield eventually returned, and an MRI revealed no structural damage.

Jarvis Landry was not as lucky, suffering an MCL sprain that will make him week-to-week. Combined with the absence of Odell Beckham Jr. in the first two weeks, the Browns’ pass-catching group is looking a little precarious.

Cleveland’s defense has shown room for improvement so far in 2021. It was understandable for them to struggle against the Chiefs. However, the Texans scored 14 points in the first two quarters and looked like they could score more before Tyrod Taylor got hurt. If the Browns are to cover the line in this game vs. the Bears, they will need their defense to step up.

Regardless of whether Dalton or Fields was under center for the Bears, they should not be able to match the Browns. Nevertheless, the injury concerns on offense for the Browns, combined with the way their defense has allowed teams to move the ball through two weeks, could make this a close game.

If Myles Garrett and Jadeveon Clowney come to play, Chicago’s vulnerable offensive line will be an issue. But if the Bears have an opportunity to get their QB comfortable, he will have some fantastic weapons at his disposal in Allen Robinson II and Darnell Mooney.

How to watch Bears vs. Browns this week