The New York Jets traded disgruntled safety Jamal Adams, which must make the Cleveland Browns feel great about the player they have in Myles Garrett. 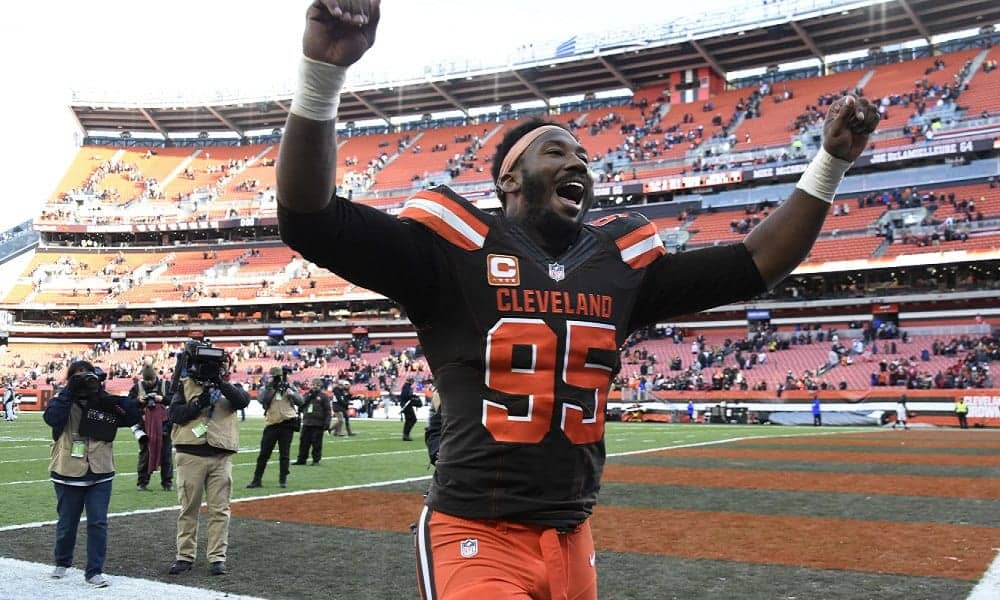 Over the weekend, the New York Jets traded their All-Pro and former first round pick in the 2017 NFL Draft Jamal Adams to the Seattle Seahawks in a blockbuster deal. Meanwhile, the Cleveland Browns have not only re-signed their 2017 NFL Draft first overall pick in Myles Garrett, but have gotten nothing but dedication and commitment to their franchise from him from 2020 and beyond.

The appreciation for Garrett continues to grow for the Browns after this Adams saga.

Myles Garrett has plenty of reason to demand trade from Browns

This offseason alone, we have seen a handful of 2017 first rounders demand trades in addition to Adams, including Garrett’s teammate on the Browns in tight end David Njoku. After hiring super-agent Drew Rosenhaus, Njoku requested a trade from the Browns just three days later.

However, their superstar in Myles Garrett has not made any indications that he wants out. In fact, his deal making him the highest paid defensive player in the NFL would seem to be a rather large indication of his commitment to a franchise that, quite frankly, has given him little reason to want to stay.

On his fourth head coach in as many years in the league (including Gregg Williams’ interim head coach stint), Garrett has seen a revolving door of those expected to mold him throughout his young career. In this span, he is now on his third defensive coordinator as well in former San Francisco 49ers’ passing game coordinator Joe Woods.

Front office turnover has been nothing new to Garrett as well, as the Browns are now on their third general manager since he was drafted by Sashi Brown in 2017. After just two seasons with the Browns, John Dorsey and the team mutually parted ways and now another Paul DePodesta protege Andrew Berry is at the helm.

Averaging nearly one sack per game throughout his career, including 10 in 10 games a year ago before being suspended for his Thursday Night incident, Garrett has already established himself as one of the premier young pass rushers in the league. Despite the lack of support from the organization around him, he has presented a model of consistency on the field.

Through a total of 35 games started, Myles Garrett has already racked up a career total of 30.5 sacks for the Browns entering 2020. He has also added 32 tackles for loss and a massive 65 hits on opposing quarterbacks. At the current sack rate Garrett is on, he is on pace to break the all-time career sack record of Bruce Smith by the time his career comes to an end.

Entering his fourth season in the league, Garrett is still just 24 years old and has room to take his game to even higher heights than he has already hit. Now with his cash in hand, Garrett looks to continue what he has done since he entered the league: consistently make life harder on opposing quarterbacks.

While Garrett often gets billed as a dirty player after injuring Trevor Siemian, and swinging his helmet at Pittsburgh Steelers’ quarterback Mason Rudolph after he allegedly directed a racial slur at him, the lack of leadership in the locker room cannot be overstated from a year ago. Now a year older and a year wiser, expect Garrett to take on that role after his massive deal.

It takes a special player to overcome three different head coaches and two different defensive coordinators through the three seasons and still produce at the rate Garrett has done. The evidence is on the table that Garrett can win no matter the scheme or responsibilities he is asked to perform on Sundays.

As the previously mentioned Berry and new head coach Kevin Stefanski look to turn around the culture in Cleveland, it is a breath of fresh air to know they have a guy like Garrett they can lean on. With the youth drafted and signed on the defensive side of the ball over the past two seasons, it will now be the lethal edge rusher who will be turned to as a leader.

Garrett has proven to be worth every penny of his massive mega-deal he signed earlier this month. Now netting $25 million per year and under contract in Cleveland until he is 30 years old, the Browns and their fans must have a growing appreciation for the former first overall pick.

Like Jamal Adams has done in 2020, Myles Garrett has more than just a few reasons to want out of Cleveland. Instead, he chose to be a part of the solution to the culture for the Browns and anchor in for the long haul. Players like Garrett do not come around often, and Cleveland gets to keep one of their own for the foreseeable future.

In this article:Jamal Adams, myles garrett