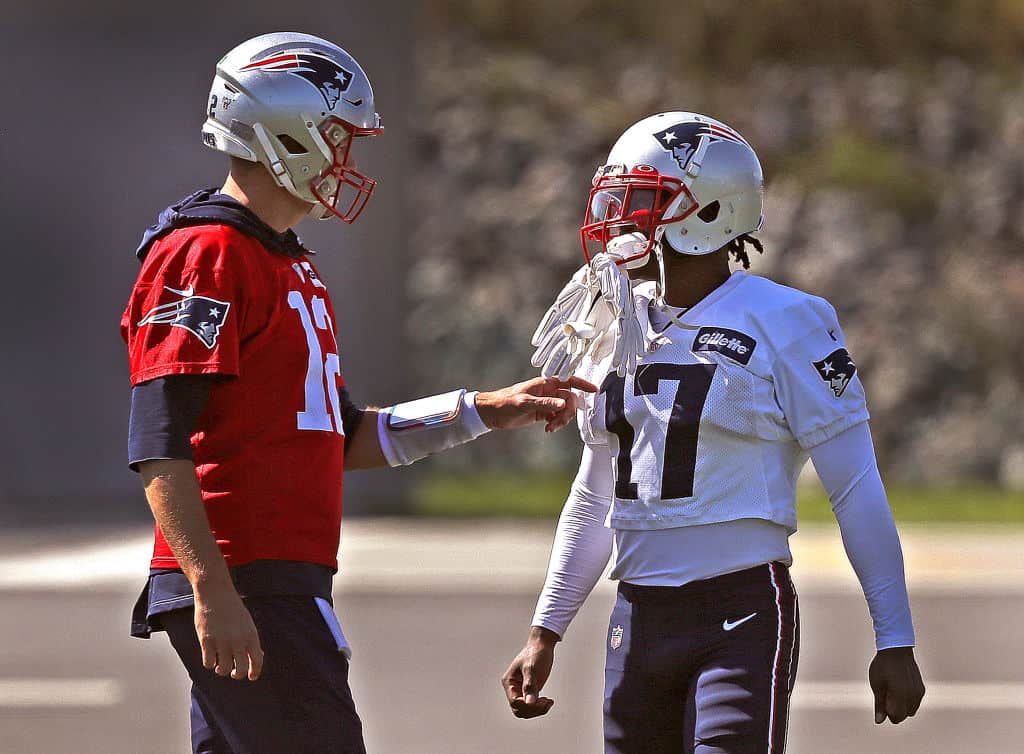 One of the wide receiver position’s top performers of the 21st century is back in uniform, as free agent wide receiver and longtime fantasy football mainstay Antonio Brown has reached an agreement on a one-year deal with the Tampa Bay Buccaneers. He will be reunited with head coach Bruce Arians and quarterback Tom Brady. And now that this is in place, what is Antonio Brown’s season and fantasy outlook moving forward?

ESPN insider Adam Schefter had reported just two days ago that Brown was drawing interest from teams, with his suspension winding down. The Seattle Seahawks showed interest earlier in the week, but Tom Brady and the Buccaneers reportedly made a big push to sign Brown in the latter stages of the saga. They were scheduled to host Brown on a visit this weekend, but the two sides ultimately came to an agreement before that.

Antonio Brown’s addition to an already-stacked Tampa Bay offense not only creates opportunities for Arians’ squad as they look to strengthen their hold on the NFC South but also presents an opportunity for fantasy football managers who are in desperate need of a talent influx at the wide receiver position. Here’s what Antonio Brown’s signing means, both for the football minds and for your fantasy team.

Antonio Brown’s stint as a free agent, amidst a new wave of talent at the wide receiver position, has somewhat dulled his reputation. Still, there was a time when Brown monopolized national recognition as a pass-catcher.

Related | Can Antonio Brown bounce back after declining in OSM rankings?

From 2010 to 2018, Brown played for the Pittsburgh Steelers, and it was there that he cemented his legacy. Over that time span, Brown was a seven-time Pro Bowler and a four-time All-Pro. He broke the 1,000-yard mark seven times, broke the 100-receptions mark six times, and broke the 10-touchdown mark five times.

However, beyond arbitrary statistical marks, Antonio Brown also made an impression as a near-uncoverable wide receiver, with the blend of talent and work ethic that traditionally forged a star. Standing at 5-foot-10, 185, Brown offered impressive speed and quickness, but even more impressive and intricate route running nuance and playmaking ability.

Even as he turned 30 years old, Brown remained a threat on the Steelers’ offense, but toward the end of the 2018 season, that partnership turned sour. Friction was generated between Brown and quarterback Ben Roethlisberger, as well as the Steelers coaching staff. Brown was ultimately traded in March of 2019 to the then-Oakland Raiders.

Brown’s initial signing with the Raiders was met with optimism, but the veteran receiver would end up not playing a snap for Jon Gruden’s squad. After numerous incidents, including a dispute over helmet types and an altercation with general manager Mike Mayock, Brown demanded his release on September 7 and had his request fulfilled.

Brown would waste no time finding his next team, as Bill Belichick and the Patriots scooped him up shortly after his release. He wound up playing for the Patriots and quarterback Tom Brady in Week 2 of the 2019 season, earning 56 yards and a touchdown on four catches in his return to action.

Brown’s time with New England started well on the field, but off the field, more issues would soon spell its end. Allegations of sexual misconduct clouded Brown’s outlook, and well before the conclusion of September, he was again released.

Since his release from the Patriots, Brown has remained a free agent. He grappled with retirement in the 2020 offseason but ultimately kept the door open for a return to the NFL. He was suspended for eight weeks in 2020 for violations of the NFL’s personal conduct policy, but as Week 8 nears, Brown will soon have his freedom, and Tampa Bay is hoping to capitalize.

Can Antonio Brown still have an impact in the NFL and on your fantasy football team?

Opinions will no doubt be all across the board on Antonio Brown’s signing with the Tampa Bay Buccaneers and whether he’ll be successful, but count Pro Football Network Analyst (former ESPN Analyst and NFL Scout) Matt Williamson as one person who’s bullish on Brown’s fit in west Florida. Here’s what Williamson had to say about Brown’s acquisition:

“[Bruce] Arians is obviously very familiar with him, since his early times with the Steelers. He’s going to go outside with [Mike] Evans, and [Chris] Godwin will be in the slot, and it’s an elite trio of receivers.

“Assuming he’s still the same player — and frankly, I think he is; I’d be shocked if he isn’t, especially with his work ethic, which is legendary and not at all overblown. His work ethic and desire to be great on the football field is remarkable.

“Say what you want about him off the field, but [Brown]’s work ethic is bonkers, so I think he will make a very quick impact. I know it was just one game with Brady in New England, but he made a quick impact as a Patriot, just as he did as a Steeler. And I know it was a while ago, but even his last game in Pittsburgh, against the New Orleans Saints in 2018, he was the best player on the field.

Related | NFL Power Rankings, Week 7: Teams moving up and down the board

“I really think he takes Tampa’s offense — and they already have an elite defense — I think this offense goes up a major rung. It was already good, and it was starting to really come together. They’re not gonna need much from Gronk, who’s just gonna be a blocker at this point. Ronald Jones has been a really good interior runner, but not much of a receiver. So those three receivers are gonna get a very high percentage of the targets, in my opinion.

“Short, intermediate, deep; Antonio Brown can do all of those things – I think it’s a great signing for the Tampa Bay Buccaneers.”

Williamson brings up a few great points, particularly about Brown’s withstanding utility. Receivers past the age of 30 often face questions regarding their viability, but Brown has a skill set which is conducive to late-career production, and in 2019, at the age of 31, he looked like the same impactful player in a limited sample size.

Now, Brown is 32 years old, but he’s had almost two full years to get healthy and stay fresh, waiting for his next opportunity. Now that it’s come, Brown should be primed to pick up where he left off.

Antonio Brown set to return to the field in Week 9 vs. the New Orleans Saints

There will undoubtedly be a level of projection required when discussing Antonio Brown’s fantasy impact with the Buccaneers, and he won’t hit the field until Week 9, as he’s still suspended for two more weeks. But Brown should be primed to produce, and even though he’s joining a crowded receiver room, his veteran savviness will resonate with Tom Brady early, just as it did in New England.

Assuming Antonio Brown joins the Buccaneers as quickly as possible, he’ll suit up with Tampa Bay to do battle against the New Orleans Saints in Week 9. From that point on, he’ll join the Buccaneers on a season-ending stretch that includes the Carolina Panthers, Los Angeles Rams, Kansas City Chiefs, Minnesota Vikings, and Atlanta Falcons.

Most of those teams will present potential shootout implications in their respective matchups, and even the non-playoff contenders such as the Panthers, Vikings, and Falcons have proven that they can put pressure on teams with their passing attacks, in spite of varying degrees of volatility.

The only concern is that there may be too many mouths to feed for Brown to get a heavy volume, but if he’s the same player he was in Pittsburgh – as Williamson thinks he is – then Brown will naturally have targets funneled his way. Brown will be called on to produce regardless, and although he’ll be sharing with two similarly impactful receivers, there should be plenty of passes to go around.