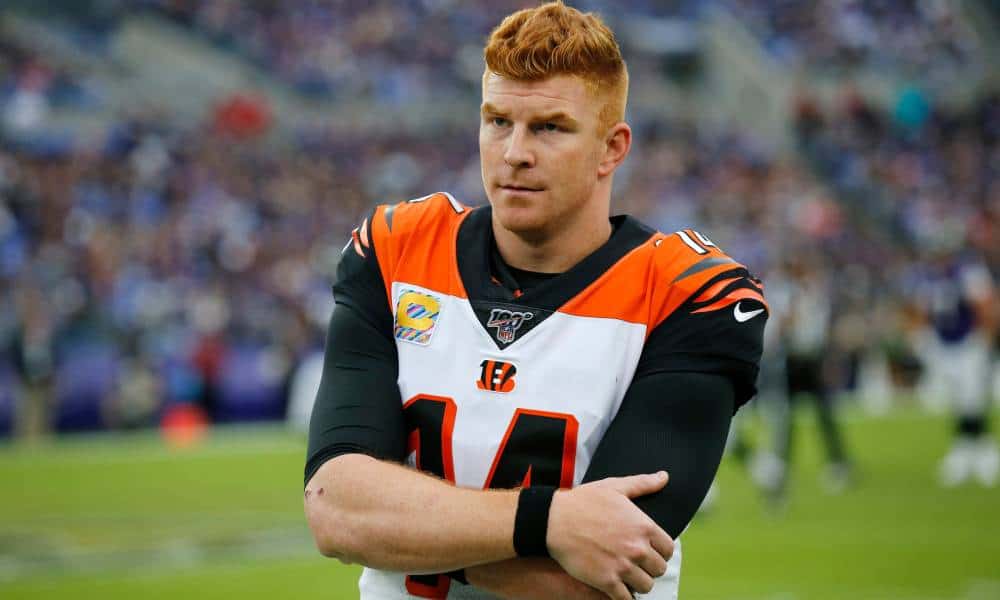 The Cincinnati Bengals once again finished the season with the worst overall record in the NFL at 2-14. The last time they finished at 2-14 was in 2002 with Jon Kitna under center and Dick LeBeau as head coach. After that 2002 season, the Bengals fired LeBeau and hired Marvin Lewis, who drafted franchise quarterback Carson Palmer with the #1 overall pick in 2003. This year, the Bengals seem poised for a similar changing of the guard, aside from keeping HC Zac Taylor this time around. But if they draft a new QB, what does that mean for their old one? Is there a market for Andy Dalton as a free agent? Let’s see what we can figure out.

If you just look at the team’s record you might say that Dalton has to go, that he must be to blame, but the numbers say something else. He finished the season with a “good” Offensive Share Metric score of 24.66, 12th in the NFL, and had a few great weeks as well. Dalton threw 16 TDs to 14 INTs in 13 games with a 59.5% completion percentage, nothing flashy but nothing horrible either. And all of that was without the team’s starting wideout and Dalton’s favorite target in AJ Green, who missed the entire season with an ankle injury.

Even though he wasn’t horrible in 2019, the writing has been on the wall for Dalton to move on for over a year now, and most of the Bengals front office has been upfront about it. Dalton is no spring chicken, he’s 32 years old and in his 10th NFL season. He’s on the last year of his current contract, set to earn $17.7 million if he stays with the team, but has no dead cap hit if the team opts to just cut him outright. With that low of a risk, it would make more sense for the team to try to trade him if they can, but what’s the market say he’s worth?

Since the start of free agency last week, a handful of older quarterbacks have signed lucrative deals. The biggest one is the deal the Tennessee Titans gave to their current starter in 31-year-old Ryan Tannehill. He got 4 years, $118 million, and $91 million guaranteed. Tannehill put up terrific numbers last year, with an elite OSM score of 34.36, best in the league, along with 22 TDs, 6 INTs, and a 70.3% completion rate. All significantly better than Dalton, without a doubt. But this new deal pays Tannehill $22.5 million in total for 2020, which is only 21% more than Dalton is scheduled to make. Is Dalton only 21% “worse” than Tannehill?

Another free agency signing was in Carolina with 28-year-old Teddy Bridgewater. He got 3 years and $63 million, with $33 million guaranteed. In 2019, when Bridgewater started for the injured veteran Drew Brees, he put up an average OSM score of 18.92, 34th best at the position, and threw for 9 TDs, 2 INTs, and a 67.9% completion rate over 5 starts. Based on the numbers, you could argue that Dalton did more with less since his OSM score was higher, but also performed worse due to the additional turnovers. Bridgewater is scheduled to make $14 million on his new deal this year, 21% less than Dalton’s current deal. Is Dalton only 21% “better” than Bridgewater?

In terms of money being spent, Tannehill definitely deserves more than the others, but does Dalton deserve to be equally between Tannehill and Bridgewater? Depending on what numbers you prefer to make your argument, that could go either way, but given his age and lack of “upside” in the league, I would argue that there are few teams willing to pay Dalton his current salary out there, making it much more likely that the Bengals cut him and let him find a new home on his own.

If Dalton becomes a free agent, this opens the door to a wider number of teams that could show interest since they won’t be forced to pay his current salary. The top three teams for him, in my opinion, are the New England Patriots, the Los Angeles Chargers, and the Carolina Panthers. In all three cases, he would not be a “franchise” starting quarterback but would either be a transitional player for a younger talent or a backup plan in case of injury. This will significantly cut his value as well as his contract, but it’s just where he is in his career.

Take the Patriots, for example. They opted not to pay future Hall of Famer Tom Brady the $30 million/year he was looking for and let him walk in free agency. He eventually found that home in the Buccanneers, but is he worth the salary? For 2019, the 42-year-old Brady put up somewhat average stats with 24 TDs, 8 INTs, and a 60.8% completion rate. Brady’s OSM for the year was 19.69, or QB29, meaning Dalton would be an improvement in that area. It’s likely that the Pats decide to run Jarrett Stidham out there instead or draft a rookie, but in those cases, Dalton could still provide some much needed veteran depth for that offense now that Brady is gone.

The Chargers are another team that recently lost a veteran QB in Philip Rivers, who also underperformed last year. The 38-year-old Rivers put up 23 TDs, 20 INTs, and had a 66% completion rate to go along with an above-average OSM of 27.08, eighth-best in the NFL for the year. Obviously the Chargers are looking to go younger here, but they are a team I’ve been eyeing as a landing spot for Dalton for months now. He could be had for cheap and could be a week 1 starter if need be, taking some of the pressure off whoever the Chargers target in the early first round.

Last but not least, I wouldn’t be shocked if Dalton wound up finding a home behind the aforementioned Carolina Panthers. Bridgewater is far from a rookie, but he hasn’t had to carry a team for an entire season yet, which Dalton has. Also, earlier this off-season there were some talks of a trade between the two teams that involved both Dalton and Carolina’s Cam Newton, who is not likely to be re-signed or traded at all any longer. Perhaps there was some truth to those rumors and Dalton finds his way to the east coast anyway.

At the end of the day, I do see free agent Andy Dalton finding a home somewhere, and likely sometime soon. He’s still got the talent to be a starter for at least another year or two and should be able to convince an owner or GM somewhere to let him keep playing, just not with the team who drafted him in the Cincinnati Bengals.

Continue to visit the Pro Football Network for NFL news and in-depth analysis like the #PFNOSM data and NFL draft news and analysis while also visiting our Dynasty Fantasy Football section for more coverage.

Andrew Hall is a writer for PFN covering Fantasy Football. You can follow him on Twitter: @AndrewHallFF.