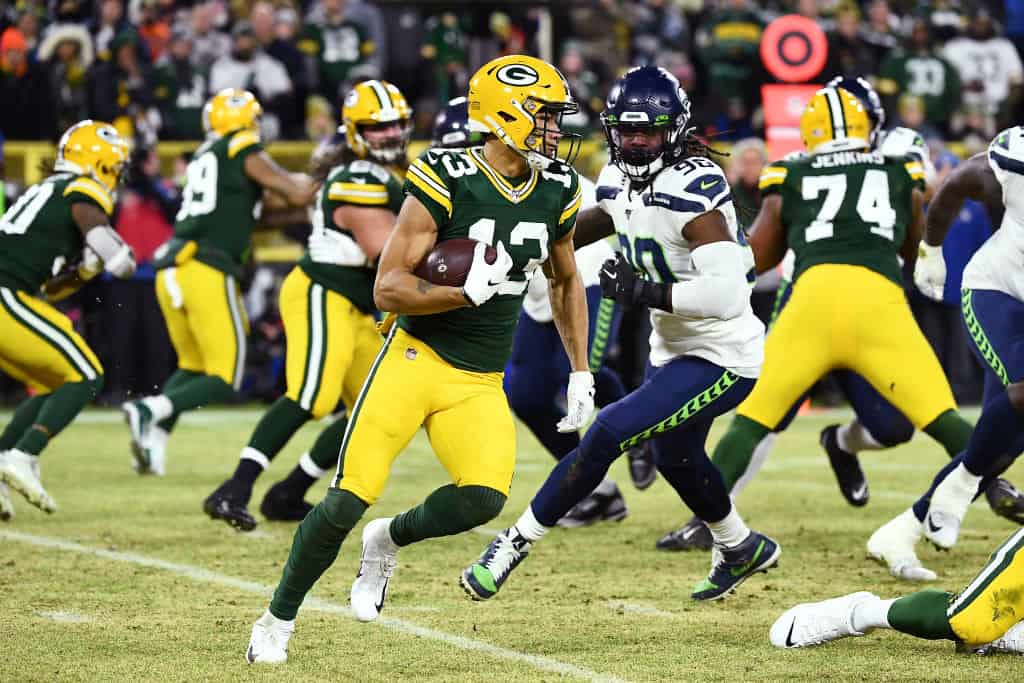 GREEN BAY, WISCONSIN - JANUARY 12: Allen Lazard #13 of the Green Bay Packers runs with the ball during the first half against the Seattle Seahawks in the NFC Divisional Playoff game at Lambeau Field on January 12, 2020 in Green Bay, Wisconsin. (Photo by Stacy Revere/Getty Images)
What's in this article? Click to show
Green Bay Packers WR Allen Lazard set to return from injury on Sunday vs. Indianapolis
Allen Lazard was off to a great start to the season prior to his injury
What should you do with Allen Lazard in fantasy for Week 11?
Want more fantasy football analysis and news?

Coming into their game with less than 48 hours until kickoff, the Green Bay Packers are getting back one of their playmakers as WR Allen Lazard is set to make his return in Week 11 from an injury that has kept him on the sidelines for six weeks. This gives fantasy football managers something they have not had since Week 3, a viable WR2 attached to Aaron Rodgers. While the matchup this week is less than ideal, how should fantasy managers approach Lazard, and what are the expectations for the third-year pro?

Currently rostered on 32% of ESPN and 43% of Yahoo leagues, Allen Lazard could be a last-minute addition to put your team over the hump and headed into the playoffs with just four games remaining.

While it has not been outright confirmed, it appears that Packers WR Allen Lazard is going to make his return in Week 11. Head coach Matt LaFleur listed Lazard, who returned from injured reserve on Tuesday, as questionable for Sunday’s showdown with the Indianapolis Colts.

“He’s been making progress, again we’ll see how he’s feeling,” LaFleur said Friday. “Hopefully, he’ll be able to go, but again I think it’s going to be more something we’re going to figure out on Sunday.”

A report by Ian Rapoport on Sunday morning confirmed that Allen Lazard is expected to play in Week 11. However, Lazard will likely be on a pitch count as GB eases him back into action.

This is the first time since Week 3 that Lazard has had a chance to play after undergoing core muscle surgery following the game against the New Orleans Saints.

During practices on Wednesday, Thursday, and Friday, Lazard was listed by the Packers as a limited participant.

The Packers will have up until 90 minutes before kickoff to determine Lazard’s status for Sunday, so even though it does seem to be trending in the right direction, we will not know until the last minute. The concern for fantasy managers comes with the Packers playing in the afternoon window, potentially meaning they are making a decision without confirmation ahead of the 1:00 PM window of games.

If he is on the field, Allen Lazard instantly steps into the WR2 role, a spot that has been largely vacant all season for fantasy football purposes.

With it being so long since we have seen him, I think the masses have forgotten how good Lazard was in the season’s opening weeks.

In his short time on the field this year, Allen Lazard had 13 receptions on 17 targets for 254 yards and two touchdowns. From Weeks 1 through 3, Allen Lazard was the team’s WR1 in fantasy points (52.1 to Davante Adams’ 48.2), and he was WR10 overall.

As a unit, the Colts rank 30th in Defense Points Against Consistency (D-PAC) with a score of 11.08, meaning they are not a matchup that you typically want to attack in fantasy, but we also know that Aaron Rodgers can shred even the best defenses in the NFL any given week.

In a perfect world, we would love to see Lazard play a whole game before trusting him, but if you are thin at the position or have players on a bye, Lazard could be worth the risk knowing how much the Packers lack at pass catchers not named Davante Adams (who is going into this game less than 100%).

What should you do with Allen Lazard in fantasy for Week 11?

The first thing I am doing is going straight to the waiver wire to see if he is available. As I mentioned in the beginning, Lazard is available in 67.4% of ESPN leagues and 57% of Yahoo leagues, so there is a solid chance he is floating on yours right now. Even if you don’t feel comfortable playing him this week, you have a great depth option for Week 12.

Don’t let Marquez Valdes-Scantling throw you off thinking he is the WR2 on this team. Yes, he has had back-to-back great weeks. In Week 9, he was the WR10 with 19 PPR points and then was the WR1 last week with 24.9 points. However, his 202 yards and three touchdowns came on only six receptions. That level of production is not remotely sustainable. Up until this burst he has had, Valdes-Scantling went over double-digit fantasy points only one time, and that was in Week 1, not even in a week where Lazard was absent.

While I don’t love the matchup this week against the Colts and the likelihood of getting paired against Kenny Moore, who has been solid in the slot, I do like the value of Allen Lazard and his post-injury value that can be added right now. It’s rare that in Week 11, you can go onto waivers and add a team’s WR2, especially one tied to a future Hall of Fame QB that is sitting in first place in their division.