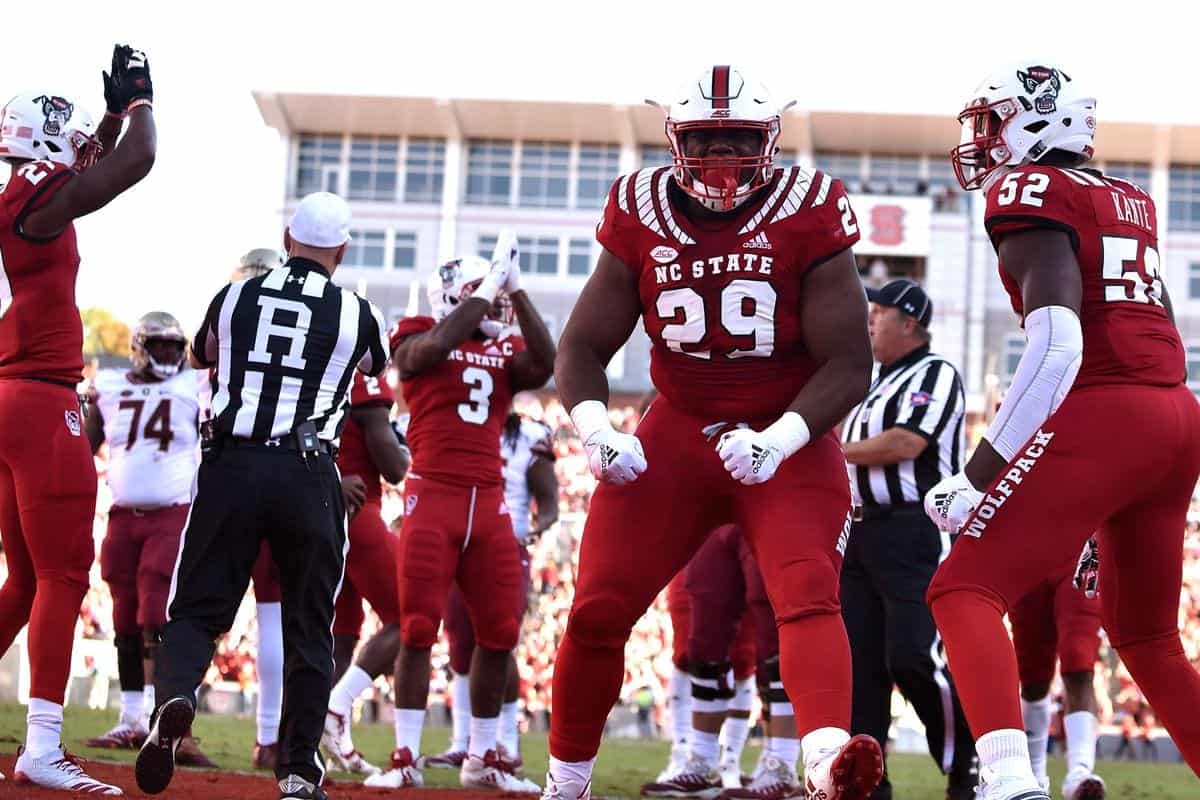 The NC State defense was underwhelming in 2019. They allowed just under 400 yards and slightly over 30 points-per-game against last season. There’s an old acronym “LOFT” that golfers use to describe the Wolfpack defenses’ general situation last year. I’ll let you look up what that one means on your own time.

However, the Tennessee Titans did draft defensive tackle Larrell Murchison in the fifth round. But it was the young lad playing beside him in the 0/1 technique spot that really shined. That young man was 2021 NFL Draft prospect, Alim McNeill.

McNeill is a trash can full of dirt. Despite only weighing in at a listed 315 pounds, there is hardly any ground given on his part throughout the course of a game. He’s a compact player at 6’2″, and those pounds are very well distributed throughout his frame. He doesn’t look to carry any bad weight in his midsection, and it shows in how he moves. But what’s most surprising is that ability to stand his ground, even against double teams.

He does all this without getting too far in front of his toes and he does it without needing to twist and drive a knee to the ground to post up. That’s partially due to his natural leverage and partially because of his advanced hands. He simply stays square and controls what he can with the center and holds strong against the down-blocking guard.

His hands are incredibly good at the snap. He displays good snap timing and fires off the ball well, but his strike timing and hand placement in those moments right after the snap and through the initiation of contact is better than most. In NC State’s two-gap defensive scheme that asks their linemen to attack the chest of the blocker in front of them and play both gaps to their left and right, he excels.

He keeps his elbows tight, strikes violently, and displays impressive extension and grip strength to control and steer linemen. And what maybe even more impressive is his ability to combine that ability off the snap with ripping through with his inside arm to get his head across blockers on stretch concepts to chase the back wide.

What makes this all the more impressive is looking into his history. He’s only played defensive tackle now for two seasons. As a high school recruit hailing from Raleigh he played inside linebacker and was a short-yardage back. At the time of his recruitment, he was 270 pounds and was listed as a defensive end coming in as a four-star recruit.

He ran the 40-yard dash in 4.96 seconds, and if he’s able to still get up and go like that at over 300 pounds we’re pouring gasoline on the draft stock fire. But what’s most impressive about his high school times is the explosive drills. He ran a 20-yard shuttle in 4.27 seconds and jumped 34 inches. For reference, that’s both quicker and higher than Aaron Donald’s combine numbers.

But he is not Donald, and it’ll be difficult to remain that agile and explosive after adding 45 pounds, even in the ecosystem of an ACC college weight program. But that natural athletic ability is evident in his tape. He really can move laterally with some suddenness for a big boy, and it allows him to cross the face of blockers on the off chance he is able to pin his ears back and rush the passer.

His long speed and endurance also show adequacy, as he constantly chases from hash to hash and plays a lot of snaps without taking reps off on the field. McNeill is full-go all the time. He has all the makings of a good two-gap defensive tackle and has the high-end athleticism and initial hands necessary to play as a penetration player.

That all sounds fantastic, so why isn’t he getting more attention from the draft community in June? Well, because he’s simply not there yet. He is not yet in the upper echelon of draft prospects like Florida State’s Marvin Wilson. What he is though is very valuable. Right now he should be viewed in a similar vein Ohio State’s DaVon Hamilton, who heard his name called in round three of the 2020 Draft. He’s not quite as naturally powerful in his hands or as a true gap filler, but he’s markedly more explosive than Hamilton.

However, there are issues in his overall game, which is probably why he wasn’t listed in the top 10 at his position by PFN’s draft analyst Matt Valdovinos. He doesn’t lack the ability to disengage from blocks when he’s in the vicinity of the ball, but he consistently reacts late and just barely misses opportunities to finish plays on the ball.

He does a great job keeping his distance and his vision through blocks is outstanding, but he refuses to be proactive in disengagement. But the biggest issue is also his best attribute. His hands, for as advanced as they are, lack violence on contact. That makes things difficult for him on pass rushes. He’s too often unable to get the offensive linemen’s hands dislodged on club and hump moves, which in turn doesn’t allow him to use his athleticism to bend and win around the corner of the blocker.

In games against Clemson, Louisville, and Boston College these issues hung over McNeill’s head like a dark cloud. There was a lot of so close, yet so far away. That was not the case against rival North Carolina. He was the best player on the field in that game, to include freshman phenom Sam Howell from Carolina. He completely dominated the middle of the offensive line and played like his pants were on fire on every rep, even when trailing by multiple scores.

If McNeill is able to improve his pass-rush ability just a hair in 2020 and starts finishing some of those close calls, he should universally be viewed as a top-75 type player. But even if he doesn’t his plus athleticism and technical refinement will have evaluators drooling.