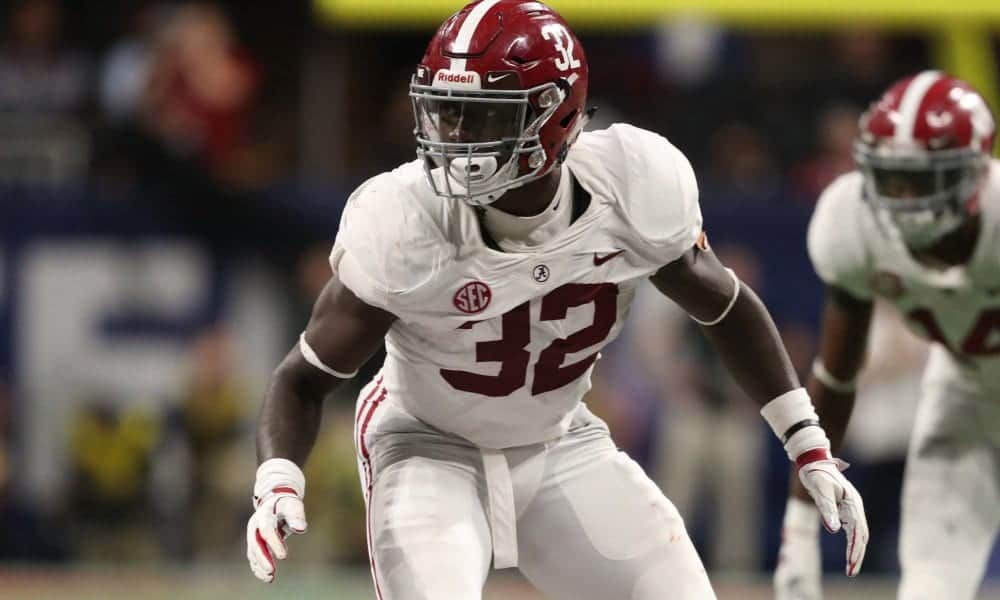 The premier college football program of the past decade, the Alabama Crimson Tide is always fighting for the national title and putting numerous players into the first round of the draft. It will be no different in 2019.

There is a ton of exceptional next-level talent from the underclassmen ranks on the Alabama roster. That’s no surprise, as the program struggles to keep their best players for the duration of their college eligibility.

Dylan Moses is a “wow” type of defensive prospect. He’s a complete three-down defender who makes plays against the run and is also incredibly effective in space. Moses is smooth and very athletic, but he’s also instinctive and covers a lot of area on the field for Alabama. In the end, I believe he has more upside than former Crimson Tide linebacker C.J. Mosley.

Once you get past all the hype, you find Tua Tagovailoa is truly a good quarterback prospect for the next level and not just an athletic guy playing quarterback at the college level. Tagovailoa possesses all the physical skills to play on Sundays. He has a next-level arm, makes all the passes and, at the same time, easily makes plays with his legs.

What impressed me so much on film was the vision, wherewithal and general feel for the position the junior possesses. Tagovailoa does not make poor choices throwing the ball, plays smart football and is very tough. There’s no reason Tagovailoa can’t end up as the first pick of the draft when one considers Kyler Murray achieved that feat in April.

Jerry Jeudy is not a big or sturdy wideout, but he’s a quick, sure-handed receiver who possesses game-breaking skills for the Crimson Tide. Opponents struggle to stay with Jeudy out of breaks, and he has the vertical speed to take it the distance.

I thought Raekwon Davis took a step back last season. He’s a big dude in the middle of the line — possibly too big — and easily holds his ground or occupies gaps. At times last season, Davis looked sluggish and was not the playmaker I saw on the Alabama defense in 2018.

Trevon Diggs, whom I presently grade as a second-rounder, has the possibility to make a big leap up draft boards. The senior has the physical skills and football ability to be a dominant corner not only at Alabama this season but at the next level. He’s big and athletic and possesses terrific ball skills. Diggs is also fast and stays step for step in the deep field with speedy opponents.

Why don’t I have him graded higher? In a word, durability. Diggs struggled through most of the 2019 season with a foot injury and was shuffled in and out of the lineup. If he stays healthy and plays the way I believe is possible, Diggs could move into the top half of the first round.