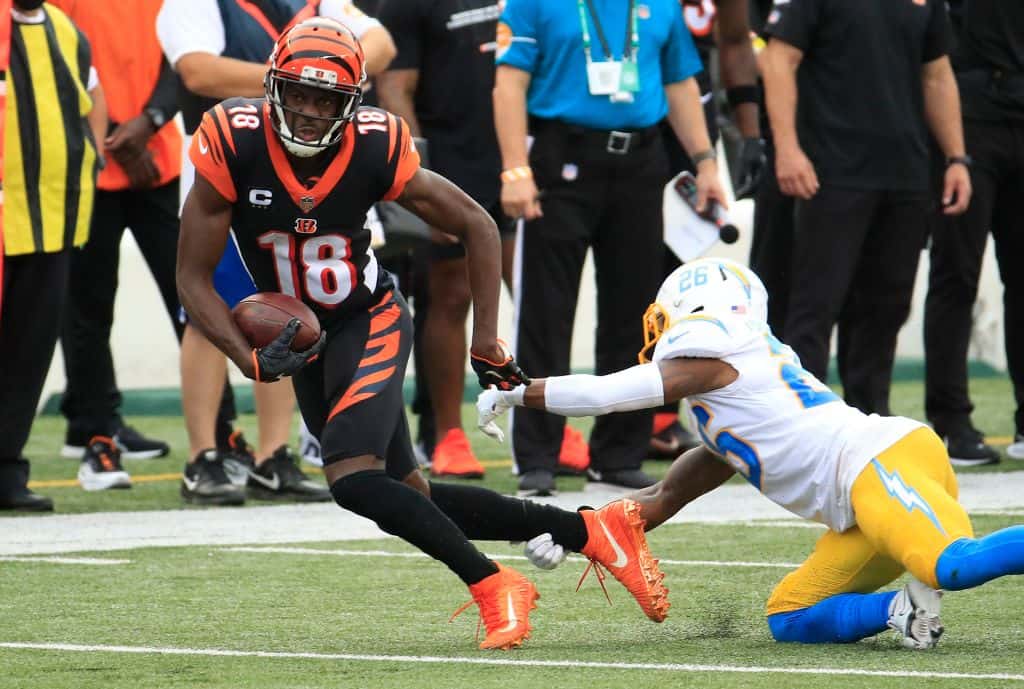 CINCINNATI, OHIO - SEPTEMBER 13: A.J. Green #18 of the Cincinnati Bengals runs with the ball against the Los Angeles Chargers during the game at Paul Brown Stadium on September 13, 2020 in Cincinnati, Ohio. (Photo by Andy Lyons/Getty Images)
What's in this article? Click to show
Due to AJ Green’s longevity with the Bengals, will the team actually move him?
Reward: AJ Green is a future Hall of Famer
Risk: An AJ Green trade comes with injuries, underachievement, and a rental contract, oh my!

The NFL trade deadline is less than two weeks away, and AJ Green trade rumors are swirling again. Green has been the face of the Cincinnati Bengals for a decade. The star wide receiver is second in receptions, yards, and receiving touchdowns in team history, trailing only Chad Johnson. He’s a franchise icon, but does that mean that the team is incapable of moving on from him? What kind of value or market could be available for the aging WR?

Due to AJ Green’s longevity with the Bengals, will the team actually move him?

The team has resisted the urge to trade him in recent years and even franchise tagged him this past season. But, with another losing season staring them in the face, it might be time to say goodbye. In the immortal words of Pittsburgh Pirates general manager Branch Rickey, “We finished last with you, we can finish last without you.”

If the AJ Green trade rumors are real, teams are going to need to weigh the risk versus reward here. Is Green worth the massive salary (and possible draft pick compensation) someone is going to give up?

Reward: AJ Green is a future Hall of Famer

The upside of any Green trade is tremendous. When Green is performing at his pick, he’s no doubt one of the best WRs in the NFL. Over his 10-year career, Green has topped 1,000 yards in every year that he’s played at least 11 games. From 2011-2018, Green averaged 87 receptions for 1,284 yards and nine touchdowns per 16 games. In 2018 alone, Green was on pace for 82 receptions for 1,234 yards and 11 touchdowns before an injury ended his season.

Green is one of the best wide receivers of his generation. If any team is in need of a receiver, then they have to at least consider trading for him. Resiliency comes in many forms, and Green could be one scene change or scheme change away from bringing back his Hall of Fame-caliber moxie. There’s no other player on the market that has the upside Green does. That’s why every team is going to investigate the ongoing AJ Green trade rumors, at the very least.

Risk: An AJ Green trade comes with injuries, underachievement, and a rental contract, oh my!

While the upside for Green is tremendous, the risk may be even larger. Topping the list of risks for Green is his recent injury history. Green missed seven games in 2018 and all of 2019. He hasn’t missed a game in 2020, but it’s clear the injuries, along with age, have sapped some of his athleticism. He just doesn’t look like the same player on the field.

Green has produced just 14 receptions for 119 yards in five games this season. That puts him on pace for 45 receptions for 381 yards over 16 games. That level of underachievement would be astonishing. Even in the worst season of Green’s career, he put up 694 receiving yards, though that was in nine games.

It’s hard to believe Green is as bad as the numbers suggest, but how much better would he be in a different scheme? Even if he doubled his current pace, he would still be on pace for his worst season ever on a per 16 game average.

Even if a team ignores the production and the injuries, could they overlook his contract? Green is playing on the franchise tag, which means his contract is up at the end of the season. Would any team be willing to give up a draft pick for one year of this version of AJ Green?

There’s no doubt that Green has the tantalizing upside that will draw every team’s attention, but the risk is just as big.