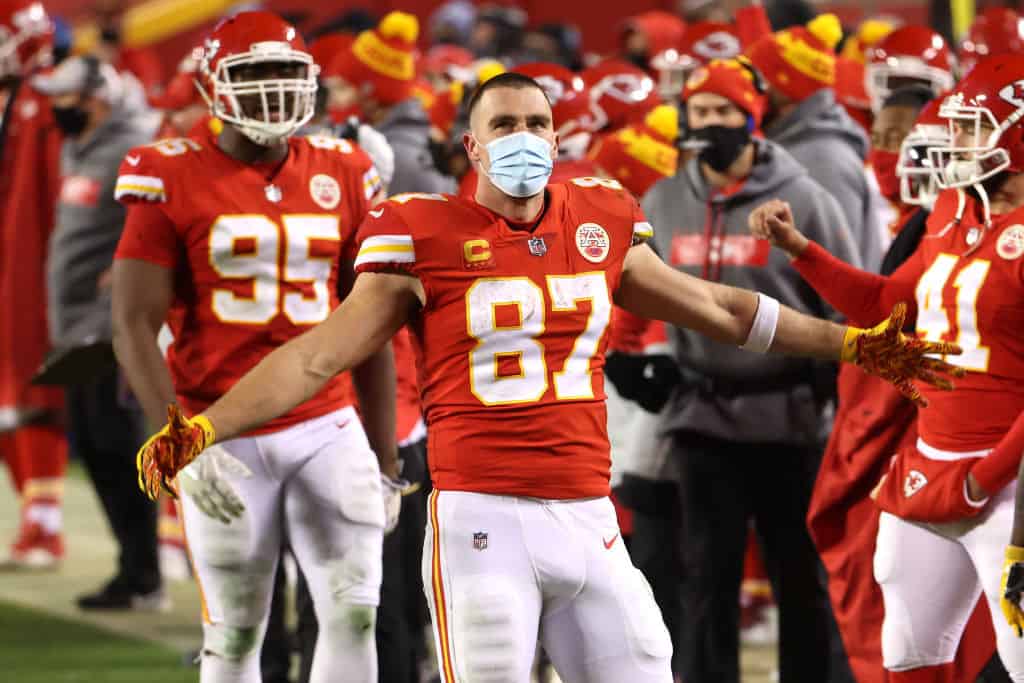 With 13 catches in Sunday’s 38-24 Kansas City Chiefs victory over the Buffalo Bills in the AFC Championship Game, Travis Kelce now has 73 career postseason receptions, tied for 10th on the all-time list and second among tight ends. Travis Kelce’s video game stats and assault on the postseason record books can not only help power Mahomes over Tom Brady and the Tampa Bay Buccaneers in Super Bowl LV, but NFL Recap believes that another big Super Bowl performance could land Kelce in the Hall of Fame as well.

Tyreek Hill may be Patrick Mahomes’ most explosive weapon. Still, Kelce is his most reliable and unpredictable weapon, capable of churning out eight-catch games like clockwork, juking cornerbacks out of their cleats, bailing Mahomes out with tough catches after a scramble drill, and turning shovel passes into rugged goal-line touchdowns.

Kelce’s touchdown catches came on a shovel pass up the middle and a fadeaway jump shot from a pressured Mahomes near the goal line. All evening, Kelce slipped behind the Bills’ underneath zones and schooled defenders like Tremaine Edwards and Matt Milano in coverage. Late in the game, Kelce even put a move on Pro Bowl cornerback Tre’Davious White for a reception, just as he knotted Cleveland Browns cornerback Denzel Ward’s ankles last week.

Between Kelce and Hill, the Bills’ defense faced a familiar problem in the AFC Championship Game. No defense has a plan for covering the NFL’s fastest wideout AND its best route-running size/speed/experience nightmare of a tight end. And if any team ever does come up with that plan, Mahomes will just beat them with Mecole Hardman, Darrel Williams, etc., etc.

Travis Kelce by the numbers

Here is the all-time top 10 list of career postseason receptions, via Pro Football Reference. It’s actually the “top 11” because of a tie:

Kelce shot past some nobodies like Cris Carter, Marvin Harrison, Art Monk, and Anquan Boldin after the AFC Championship Game, as well as fellow tight ends Sharpe, Dallas Clark, and Jay Novacek into second place behind Gronk. The top of the list is a mix of Hall of Famers and guys who played with Tom Brady. Kelce could easily finish his career in the top three. He could even end up second to Rice. Kelce’s postseason stats are that impressive — and he has no appearance of slowing down.

Related | Who are the highest-paid tight ends in the NFL in 2021?

Kelce has also caught at least 7 passes in 10 consecutive regular season games, dating back to Week 8 against the New York Jets. Per NFL Research, Antonio Brown and Edelman are the only other players in modern history to enjoy such a streak. Kelce also had a streak of seven straight games with at least 8 receptions this season. Only Brown, Boldin, and Michael Thomas ever enjoyed streaks that were equal or longer.

Putting Kelce on the proper pedestal

The regular season and postseason stats and streaks put Kelce’s impact into perspective. It’s easy to lose track of all the pinball numbers the Chiefs have put up over the last three years. It’s also tempting to assume that lots of modern tight ends put up 8-136-1 stat lines week after week. (Kelce produced those exact numbers in back-to-back weeks against the Denver Broncos and Miami Dolphins).

Kelce is doing things no tight end has ever done before. That’s a big reason why the Chiefs won the AFC Championship Game and headed to their second straight Super Bowl.

And before you credit all of Kelce’s success to Mahomes, keep in mind that he caught 23 of his playoff receptions from Alex Smith.

What it means for Travis Kelce and the Chiefs

Is Kelce a Hall of Famer? Probably. He has the Super Bowl ring, a Super Bowl touchdown, the All-Pro and Pro Bowl selections, and the stats. Sunday may have been the “signature moment” that some voters still point to when sorting among finalists. Yet, the Hall of Fame will have to wait a long time for Kelce, who is well within his prime at age 31.

Football Outsiders ranks the Buccaneers’ defense 25th in the NFL at covering opposing tight ends. Kelce caught 8 passes for 63 yards against the Buccaneers in Week 12, so perhaps Tampa Bay can stop him. Then again, Hill caught 13 passes for 269 yards and 3 touchdowns in that game — stopping Kelce comes with a cost.

While all eyes will be on Brady and Mahomes, the two best tight ends of their generation will be squaring off in Kelce and Gronkowski. And while Gronk still makes his presence felt, Kelce will be one of the most important players on the field in Super Bowl LV — an all-time great in a game that’s teeming with them.

Want more NFL news and analysis beyond Kelce’s performance in the AFC Championship?