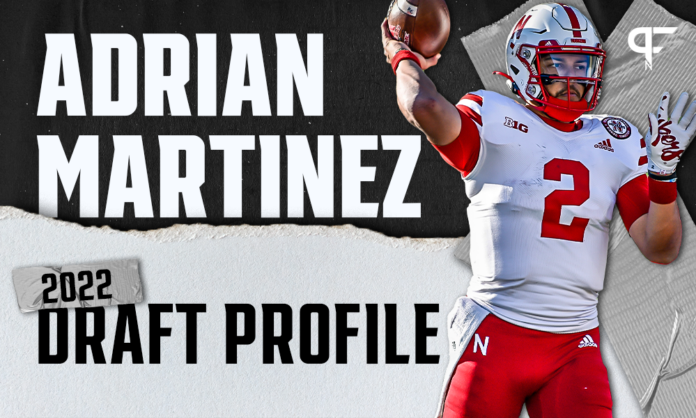 Will four years at Nebraska be enough for QB Adrian Martinez to complete his scouting report and become a 2022 NFL Draft selection?

For as long as Scott Frost has been the coach of the Cornhuskers, Nebraska QB Adrian Martinez has been the man under center. Along the way, Martinez has piqued interest regarding his NFL Draft scouting report. With three years of starting experience under his belt, is Martinez ready to take the next step, or does he have more work to do?

The Nebraska Cornhuskers haven’t had a winning season over the last three years. There’s a common thread with Martinez, but he hasn’t been the biggest problem in Lincoln. Rather, Martinez’s natural talent has, at times, invigorated the offense and generated excitement when it was least expected.

As is always the case in college football, however, there are ups and downs. And few quarterbacks have seen more variance in that regard than the Nebraska QB. We know what it looks like on the stat sheet — it’s not great. But on film, does Martinez provide a bit more reason for respect on the NFL Draft circuit?

On film, Martinez’s physical traits pop more than other projected late-round quarterbacks. The Nebraska QB is a good athlete at 6’2″, 212 pounds. He can create with his legs and extend plays — he can use those tools to evade pressure and make something out of broken situations. Martinez has excellent explosiveness and lateral agility for the position, and he also has surprising stop-and-start ability and speed in open space.

Martinez does a good job navigating lanes to get out of sacks and generally senses pressure well. He also knows how to use deception to free up running lanes. But beyond that, Martinez’s arm is relatively solid as well. The Nebraska QB has a crisp throwing motion. He can generate solid pace with it, and he delivers well-timed passes more often than not.

Martinez boasts adequate arm strength within his release. He produces velocity well, and he can push the ball outside the hashes. He also has definite arm elasticity. Although it doesn’t show up with great consistency, Martinez has shown he can create velocity off-platform. Furthermore, he can adjust his throwing angles when necessary. Overall, Martinez has good off-script traits — a key sign of potential at the NFL level.

Martinez’s physical potential will be one of his biggest selling points come NFL Draft season. However, the Nebraska QB is surprisingly strong in a few operational categories as well.

Martinez’s mechanics are fairly solid in structure. He channels his traits well and consistently steps into his throws. He has good mechanical congruence overall, and because of this, he’s pretty accurate with short throws. The Nebraska QB does a good job positioning the ball for yards after the catch, and he flashes the ability to throw to receivers’ leverage, both in the middle of the field and near the sideline.

Going further, Martinez has shown that he can reset his eyes on broken plays and find players downfield. He’s also shown that he can read the field quickly. The signal-caller has enough processing speed to work through his progressions, and he knows when there isn’t going to be much separation. Additionally, Martinez flashes the ability to throw with anticipation, although he can be much more consistent here.

Martinez has upside, but he has even more to clean up in 2021. Most notably, his mental process can be inconsistent. He sometimes drops his eyes quickly when going through progressions, and he can be too eager to take off and run. He can be late pulling the trigger on throws. The Nebraska QB often waits until his receivers are completely open, and even then, he sometimes declines to engage. This indecisiveness as a passer can work him into bad situations.

Going off of that, Martinez doesn’t often test tight windows in the intermediate range. He needs space to be confident. On the flip side, however, his decision-making involves uncharacteristic risks as well. He pushes the ball into dangerous areas, and his deep passes, in particular, aren’t always calculated risks. He just tosses it up sometimes, even when receivers are blanketed.

Overall, Martinez has a lot of trouble taking care of the football, as his 35 turnovers over three seasons would imply. Martinez doesn’t always have a great feel for spacing in the pocket. Especially against pressure, he can throw off his back foot, deflating passes. He sometimes gets too comfortable planting his feet and doesn’t stay on his toes. Morevoer, Martinez occasionally throws with a high release point, causing passes to drop quickly.

Among other things, Martinez’s precision can be an issue at times as well. The Nebraska QB doesn’t always throw receivers open, and he doesn’t have the touch to fit the ball into buckets downfield. Furthermore, he sometimes doesn’t have the wherewithal to throw the ball away when backed into a corner. This will create negative plays for his offense.

There’s something there with Martinez. In a modern NFL where off-script traits are becoming more and more important, the Nebraska QB holds a lot of upside. He’s athletic and dynamic as a runner, and he also has a live arm with good elasticity and velocity. Martinez’s upside, however, is diluted by his inconsistent mental processes and penchant for producing turnovers. He coughs the ball up too much, and he takes too many unnecessary risks.

There are some redeeming traits for Martinez. He is fairly consistent mechanically, and he’s by no means inaccurate. He’s also a good leader. He was benched for Luke McCaffrey ahead of the Penn State game in 2020 and took that move in stride. He continued to be a leader for his team — NFL franchises will like how he reacted to adversity. Nevertheless, Martinez is on the draft fringe in the 2022 class. If he wants to be a top quarterback, he has a lot of work to do.

Think about this — in an alternate reality; we might’ve seen Martinez battling for the starting job with Mac Jones at Alabama in 2020. Martinez had a scholarship offer from the Alabama Crimson Tide back in 2018. He also had offers from dozens of other schools, including Oregon, Oklahoma, Georgia, and Ole Miss.

Martinez was a highly regarded four-star recruit, hailing out of Clovis West High School in Fresno, California. His raw talent was visible. He ran a 4.79 and logged a 32.4-inch vertical jump, and he also recorded one of the best power-throw ratings in the class. He could have taken his chances with the Crimson Tide, but Martinez instead decided to join former UCF coach Scott Frost at Nebraska, taking his talents to the great plains.

One of the perks of choosing Nebraska over Alabama? Immediate opportunities. At Alabama, Martinez would have been stuck behind Tua Tagovailoa for two seasons. At Nebraska, there was a void at quarterback left by former Tulane transfer Tanner Lee, who’d been drafted by the Jaguars in Round 6 earlier that year.

As a fringe top-100 recruit, Martinez immediately entered the starting conversation and eventually earned the job. Since then, save for one exception, Martinez has been the Cornhuskers’ starting quarterback. Over three years, in 28 games played, Martinez has amassed 5,628 yards, 31 touchdowns, and 20 interceptions while completing 64.2% of his passes. He’s also managed 1,776 yards and 22 touchdowns on the ground.

Lost on the stat sheet is Martinez’s lack of progression. His true-freshman campaign was his best season. Since then, he’s remained stagnant and volatile. His 15 fumbles lead college football over the past three seasons, and his inability to maintain the starting role through 2020 was indicative of his need for improvement.

Martinez was eligible for the 2021 NFL Draft, but he ultimately chose to return to school, and for good reason. Martinez is not an NFL-ready draft prospect. His lack of progression over three seasons spells doubt on his chance to become that. Nevertheless, college football is unpredictable. No prospect takes the same developmental path, so there’s still a chance that Martinez can take the next step.

Martinez has the physical tools to be selected next April. Yet, if he wants to realize that potential, he has to improve his decision-making, throw with anticipation more consistently, and limit his turnovers in both phases. If he can accomplish that in 2021, he has a better chance to reach the NFL stage.