PRO FOOTBALL NETWORKThe NFL is fast. PFN is faster.
More
Facebook
Twitter
ReddIt
Linkedin
Email
What's in this article? Click to show
Tee Higgins’ 2020 Relative Athletic Scores
Comparing Higgins to the rest of the Bengals WR room?
How can Higgins overcome his RAS to make an impact in 2020?

Athleticism versus ability. Testing versus tape. These are the arguments that rage on for NFL evaluators when assessing how the college performance of a prospect will translate to the next level. Of course, the answer should lay someone in between, a mixture of what you see with your eyes confirmed by the statistics and testing times. For former Clemson wide receiver Tee Higgins, his 2020 testing performance raised questions about his ability to perform at the next level.

Are those concerns valid, or can he replicate his impressive college football resume for the Cincinnati Bengals in the NFL?

Despite racking up over 2000 receiving yards and 26 touchdowns during his final two years at Clemson, evaluators questioned Higgins’ ability to succeed in the NFL based on an apparent lack of speed and explosion. He had the perfect opportunity to allay those fears at the 2020 NFL Combine but mysteriously failed to run any of the athletic drills.

Higgins cited a lack of time to prepare following Clemson’s national championship run as the main reason for not testing at the combine. Instead, he would use the additional preparation time to be in prime shape at the Clemson Pro-Day.

Higgins’ performance there earned him a Relative Athletic Score (RAS) of 4.16.

Although his 40 yard dash time of 4.54 met expectations, his 10-yard split of 1.66 gave him a poor speed score for his size and position. Worryingly for a player whose ability to win is defined by his contested catch ability, his vertical jump was just 31 inches, some way below the 36-inch marker deemed a success for the wide receiver position.

Higgins didn’t run the three-cone drill, another important test for wide receivers, however, his sluggish performance in the short shuttle would suggest he would have received a poor agility grade.

It’s not unrealistic to suspect that Higgins’ poor athletic profile played a hand in him slipping out of the 2020 NFL Draft’s first round. However, he didn’t have long to wait on the second day, with the Bengals drafting him with the 33rd overall selection.

Comparing Higgins to the rest of the Bengals WR room?

The Bengals wide receiver room is a mixed bag of athletic ability. Some Bengals receivers have translated their athleticism into tangible results, some are yet to realize their potential, and some have transcended their athletic limitations to produce on the field.

After setting the 2017 NFL Combine alight with a record-breaking 4.22 40 yard dash, it will come as no surprise that John Ross is the most athletic receiver in the room. His RAS of 9.51 is made up of elite speed and explosion, with only his 5’10” height and 188-pound weight holding him back from an even higher grade.

Injuries have hampered Ross’ potential to translate that performance on the field. However, he showed signs of what he can achieve for the Bengals early in the 2019 NFL season.

A.J. Green combined great size, good explosion, good speed, and okay agility into a 9.34 RAS. He has parlayed that athletic ability into being consistently one of the best receivers in the NFL.

Tyler Boyd has a very similar athletic profile to Higgins, with a RAS of 4.27. Like Higgins, Boyd has okay explosion and poor agility, but Boyd’s superior 10-yard split gives him a higher speed score. Boyd has transcended his athletic profile to be the most valuable Bengals wide receiver by Pro Football Network’s Offensive Share Metric in three of the past four seasons.

Alex Eriksen and Auden Tate round out the Bengals wide receiver room. While Eriksen did not receive a RAS, Tate had the lowest in the room with a RAS of 1.84. Like Higgins, he has elite size, but Tate received very poor grades for everything else.

Despite this, Tate has impressed during the early days of the Bengals training camp.

How can Higgins overcome his RAS to make an impact in 2020?

The Bengals wide receiver room is the perfect example of how you can win in multiple ways as a wide receiver. Ross makes plays using his speed and explosion to get a jump on the defense and be a deep threat over the top. Boyd has a high catch percentage and is a valuable contributor out of the slot. Green uses his size and strength to win at the point of the catch.

Higgins is never going to burn a man off the line of scrimmage in the way that Ross does, that much is apparent from both his tape and his testing times, especially the pedestrian 10 yard split he recorded at the Clemson Pro Day.

One of the concerns raised about Higgins was that he would struggle to create separation in the NFL due to his lack of explosion and speed. However, the truth of the matter is that none of the Bengals receivers, especially Green, have relied on creating separation to succeed in the NFL.

Green ranked 121st out of 125 receivers for separation in 2018 according to NFL Next Gen Stats but still notched up his sixth 1000+ receiving yard season. Of the four receivers that comprised the Bengals receiving room in 2019, only Ross ranked in the top half of all NFL pass catchers.

The Bengals coaching staff know they have a diverse receiving group, and their focus is making sure they put the individual players in the best position to succeed, as offensive coordinator Brian Callahan told Bengals.com.

“What do our players do best? What situation did they thrive in? What Tyler Boyd does well isn’t what Tyreek Hill does well. They’re different types of players. We have to find out what works for us. That’s our ultimate goal. Give our guys the best chance to win matchups and be great in situations they know they can be great.”

Winning matchups is one of the things Higgins did exceptionally well during his Clemson career. He uses his elite hands, phenomenal catch radius, and elite size to win contested catches and provide a red zone threat.

If the Bengals utilize these traits, Higgins will prove to be a valuable asset to rookie quarterback Joe Burrow and the question marks around his athletic testing will be eradicated by his NFL game tape. 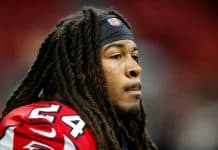 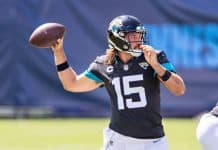 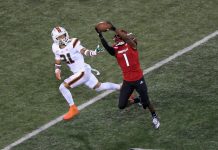