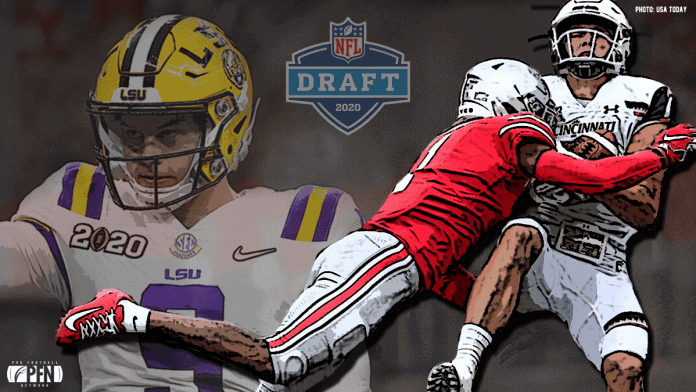 In my 7-round 2020 NFL mock draft, we see a flurry of trades in the first round, and three QBs selected within the first six picks of the draft. Buckle up!

The Bengals have needed help at the linebacker position for quite some time. Zach Baun is a versatile player, who can play linebacker and even strengthen the pass rush for the Bengals.

Despite a blockbuster signing of Trey Flowers, the Lions defensive front was abysmal during the 2019 season. Consequently, Detroit must spend significant resources into re-enforcing the unit.

Nate Solder has failed as the left tackle of the Giants. The Giants will need to move on from him as soon as possible. Ezra Cleveland must get stronger, but has upper-echelon athleticism and should develop into a quality starter.

A staple of a Brian Flores defense is a strong secondary. Miami also made a big splash in free agency by signing Byron Jones, and now they get it a do-it-all safety that will take the Miami defense to the next level. Winfield Jr. is versatile and comes with impressive NFL bloodlines. Related: 2020 NFL Draft Scouting Report: Minnesota S Antoine Winfield Jr.

A.J. Terrell was abused by LSU’s Ja’Marr Chase in the National Championship; however, before that debacle, he put out some quality tape. The Panthers have given themselves a potentially quality tandem with Terrell and Donte Jackson.

The Texans brought back Bradley Roby and Vernon Hargreaves during free agency, but they still need help at the position.

The Browns are in the market for a safety, and the talented small-school prospect from Lenoir-Rhyne gives them some immediate aid.

K.J. Hamler might be smaller, but he is extremely explosive and is an absolute home run hitter. Whether it’s with Gardner Minshew in 2020 or Trevor Lawrence in 2021, Hamler will provide the Jaguars with a big-play threat for the near future.

If it weren’t for a hip injury that cost Lucas Niang an extended portion of the 2019 season, he would likely have been a first-round pick. He is a big-time upgrade to the right tackle position for the Bears.

Marlon Davidson is a big, strong, and heavy-handed edge-setter who is an ideal fit for the Colts’ defense.

There was a time and place where LSU safety Grant Delpit was considered a top-10 draft selection. Concerns with his ability to tackle have surfaced, and his draft stock has taken a tumble. With that said, Delpit is exceptionally talented and should develop into one of the best free safeties in the NFL.

The Panthers acquired this pick from the Broncos in a first-round trade, and they use it to select the big-bodied receiver as a perfect complement to their smaller, speedier wideouts in D.J. Moore, Robby Anderson, and Curtis Samuel. If Laviska Shenault was healthy, he would be long gone. He is magical after the catch and should be able to enjoy solid production early in his career.

The Falcons need help at all levels of the defense. While they already have Dante Fowler and Takkarist McKinley, Terrell Lewis is simply too good to pass up at this point.

The Trumaine Johnson signing turned out to be a woeful move for the Jets. They released him this offseason, creating a major hole on the defensive side of the ball. Trevon Diggs has the size and athletic traits to blossom into quality cornerback at the next level.

James Conner has just been decent, and the Steelers have made it no secret they plan to upgrade the running back position before the 2020 season. Jonathan Taylor needs to work on his fumble-itis, but he has rare speed and insane production.

While Kyle Fuller is a brilliant player, the Bears still need to shore up the cornerback position.

The Cowboys pass-rush took a big blow when Robert Quinn signed with the Bears during free agency. Boise State’s Curtis Weaver was one of the most productive pass-rushers in all college football and should get an instant opportunity to make an impact in Dallas.

The Rams have made a litany of bad contract decisions and find themselves with their backs against the wall when it comes to the salary cap. Their Achilles heel over the last two seasons has been the interior offensive line, which is why selecting the quick, polished, and strong center from LSU would be a wise choice.

Jeremy Chinn’s draft prospectus is on the rise after an impressive showing at the NFL Scouting Combine. He is a plug-and-play safety for the Eagles and has a very bright future in the NFL. Related: 2020 NFL Draft Scouting Report: Southern Illinois S Jeremy Chinn.

Jerry Hughes isn’t getting younger, Lorenzo Alexander has retired, and Shaq Lawson just signed with the Dolphins. The Bills need to select an edge rusher that can help pressure the quarterback.

The Ravens have done a stellar job building their defensive front this offseason, but they still lack a legitimate pass-rushing threat outside of Matt Judon.

When I said the Dolphins need help on the offensive line, I wasn’t kidding. Selecting the monster right tackle from Georgia to pair with Jedrick Wills will give Miami bookends to protect Tagovailoa for years to come.

The Rams acquired this pick by trading Brandin Cooks to the Texans and now select his replacement. Reagor is a dynamic playmaker who should flourish in the Rams’ passing attack. Related: 2020 NFL Draft: Jalen Reagor has underrated star potential.

The Vikings must find a way to replace Stefon Diggs. Peoples-Jones won’t do it by himself, but it is a good start.

Chris Carson is serviceable, but Edwards-Helaire could be a star. He is an extremely powerful runner, who can grind yards after contact.

This might be a tad high for Malik Harrison; however, I think he is exactly what Baltimore is looking for. It is no secret that the Ravens need help at inside linebacker, as they were exposed by the Tennessee Titans in the 2019 NFL playoffs.

It was puzzling that the Titans traded Jurrell Casey to the Broncos for a 2020 7th-round pick. While 2019 first-round pick Jeffrey Simmons was brilliant down the stretch for the Titans, pairing him with the wrecking ball that is Neville Gallimore will make the Tennessee defensive front scary good.

The Packers’ defense is emerging as one of the better units in the league. Adding a monster run-stuffer like Justin Madubuike makes them even better immediately.

The Chiefs have all the offense in the world, so spending resources to continue to build their defense would be wise. Jaylon Johnson is an athletic and quick cornerback who possesses the tools to become a quality starter at the next level.

The interior of the Seattle offensive line needs a lot of work. Matt Hennessy comes with high football intelligence and is a real technician at the center position. He should be able to win a starting role as a rookie and never look back.