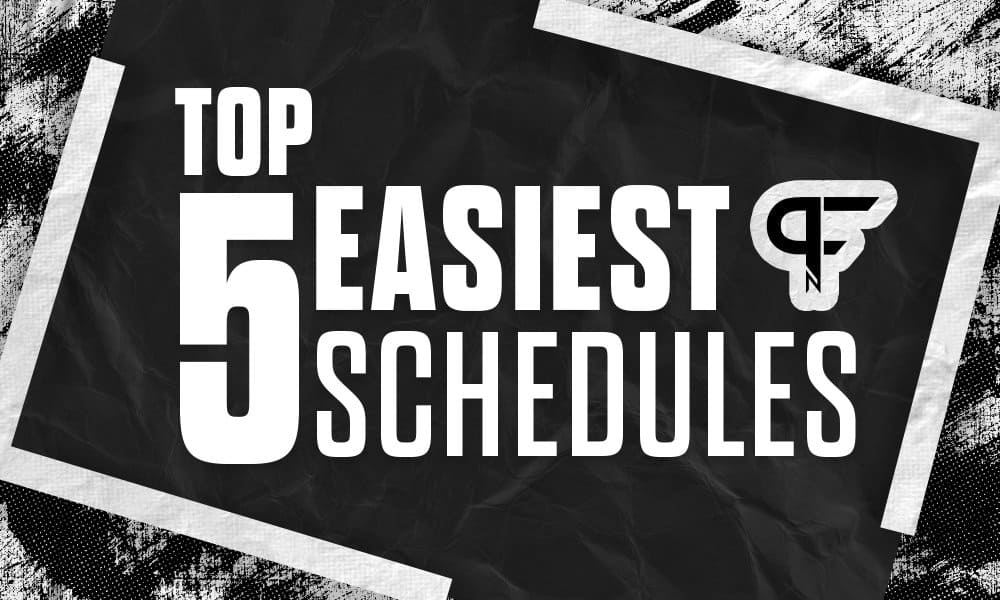 Following the release of the projected Vegas win totals, the schedules of all 32 NFL teams can now be ranked based on their opponent’s projected win totals. Which five NFL teams have the easiest 17-game schedules for the 2021 season?

Which four teams are ranked from second to fifth when it comes to the easiest schedules in 2021?

After a rollercoaster 2020 season, the Denver Broncos will head into an important campaign for the franchise in 2021 with the fifth easiest schedule in the NFL. Denver will play five games against teams projected to win seven or fewer contests. In contrast, they play just three against opponents projected to win 10 or more games.

It demonstrates how the rest of the schedule shapes up that the Broncos face a team projected to win the most games in the NFL — Kansas City Chiefs, 12 — and still has one of the easiest schedules in the 2021 NFL season. They will also face the Baltimore Ravens sometime during the year. Therefore, they will be tested by two of the AFC’s best teams in 2021.

Having one of the easiest schedules gives the Broncos an excellent opportunity to evaluate their quarterback room with Drew Lock and Teddy Bridgewater.

After a history-defining season, the Cleveland Browns have a unique chance to expand on it. Their schedule sees them play two games against an impressive Ravens team. However, they only face one other club projected to win over 10 games in 2021.

The Browns’ home schedule sees them face seven teams projected to win eight games or less. Their road schedule is more challenging, but it is not enough to take their overall schedule outside of the top five in the NFL in 2021. The 17 opponents they will battle should allow the Browns an opportunity to repeat their performance from last year.

With that said, there are enough games that are difficult on this schedule to raise red flags. If the Browns do not take advantage of the home schedule, they could be in trouble. In a crunch year for Baker Mayfield, Cleveland needs a successful 2021 campaign.

Imagine winning the Super Bowl, and then in the following season, own one of the five easiest schedules in the NFL? It seems a little bit too good to be true, but for the Buccaneers, that is exactly the case. They benefit from having a division loaded with question marks. Being in the less-than-stellar NFC East does not hurt either.

Additionally, the three games against teams projected to have double-digit wins come against opponents Tampa Bay will feel comfortable defeating. In his career with New England, Tom Brady has the number of both the Buffalo Bills and Indianapolis Colts.

Tampa Bay and their full team of returning starters will look to ride one of the easiest schedules in the NFL to a deep playoff run in 2021. There is not a game on this schedule that they will not believe they can win.

The Dallas Cowboys’ schedule receives a huge boost by only facing two teams projected to win over 10 games in 2021. Yet, those bouts come against the two teams who battled in Super Bowl LV.

The Cowboys’ real benefit comes with a home schedule that sees them clear of any team projected to win over eight games. Moreover, their division has three teams with an average projected win total of 7.2, helping lower the strength of their schedule.

If Dak Prescott can get back to full health heading into 2021 and play the way he did early in 2020, then the Cowboys have the potential for a stellar season. The only genuine concern is their defense, which struggled massively last season and still has several unknowns.

Which team has the easiest NFL schedule in 2021?

Entering the 2021 NFL season, which team stands out as having the easiest schedule based on Vegas projected win totals?

Topping the list with the easiest schedule in the 2021 NFL season are the San Francisco 49ers. They play four games against teams projected to be formidable in the Los Angeles Rams (twice), Green Bay Packers, and Indianapolis Colts.

Meanwhile, there are seven games on the schedule against teams projected to win seven games or fewer. Five of those come on the road versus the Detroit Lions, Chicago Bears, Philadelphia Eagles, Cincinnati Bengals, and Jacksonville Jaguars. The remaining two games are with the Atlanta Falcons and Houston Texans.

Still, can the 49ers take advantage of that schedule this season? Will they let Jimmy Garoppolo begin the season for them? If they have a rough start, will they switch to their rookie QB, Trey Lance? There are a lot of questions to be answered in San Francisco.