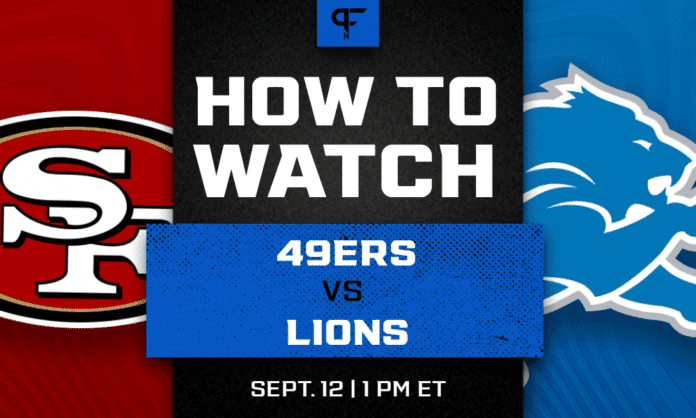 49ers vs. Lions prediction, how to watch, odds, and game preview for Week 1

What channel has the 49ers vs. Lions game, where can you live stream it, and what are the latest odds and predictions for this Week 1 clash?

By Ben Rolfe
September 12, 2021
What's in this article? Click to show
San Francisco 49ers vs. Detroit Lions | Week 1 preview and prediction
How to watch 49ers vs. Lions
Odds for 49ers vs. Lions

San Francisco 49ers vs. Detroit Lions kicks off a 2021 season in which both teams are on different trajectories. While both will start the year with playoff ambitions, that only seems a reasonable goal for the 49ers in 2021. Let’s take a look at the current NFL odds, TV channel, how to live stream, and a prediction for the 49ers vs. Lions Week 1 NFL game.

We have two intriguing quarterback situations in this 49ers vs. Lions matchup. The Lions will have Jared Goff making his debut after an offseason trade which saw the Los Angeles Rams give up on the 2016 NFL Draft No. 1 pick.

Meanwhile, the 49ers have intriguing question marks surrounding the status of Jimmy Garoppolo and Trey Lance. What role will Lance play this season? Is Garoppolo talented enough to hold off the third overall selection from the 2021 NFL Draft? We will get the first glimpse of how those questions may be answered this week.

Outside of the quarterbacks, the 49ers appear to have a clear advantage. There is relative parity along the offensive line, the running game, and at tight end. However, the 49ers appear to have the clear advantage at wide receiver and pass rush, headlined by DE Nick Bosa. But the combination of Michael Brockers, Romeo Okwara, and Trey Flowers may have a point to prove this week, too.

This game feels like it should only go one way — to the 49ers. However, the Lions have a fiery head coach who will make sure this team knows that no one believes in them. That can be a powerful motivational tool, and with uncertainty at QB for the 49ers, this could be a game we see on upset alert late in the second half.

Ultimately, the 49ers should know how to defend the skill set of Goff, having seen him frequently. Combine that with the on-paper talent discrepancy on the two rosters, and the 49ers should be able to come away victorious in this one.

How to watch 49ers vs. Lions

Odds for 49ers vs. Lions

This game has such a wide range of outcomes that it’s hard to have any play here. The 49ers could simply blow the Lions away — or we could see the two teams play it out in a close one.

Equally, it’s hard to know what to expect from either offense. If the 49ers lean heavily on the run game, we could see a low-scoring affair. However, if the Lions get their passing game clicking to T.J. Hockenson and Tyrell Williams, we could see a back-and-forth matchup. The lean is to the under in this one, but it’s a hard game to judge.