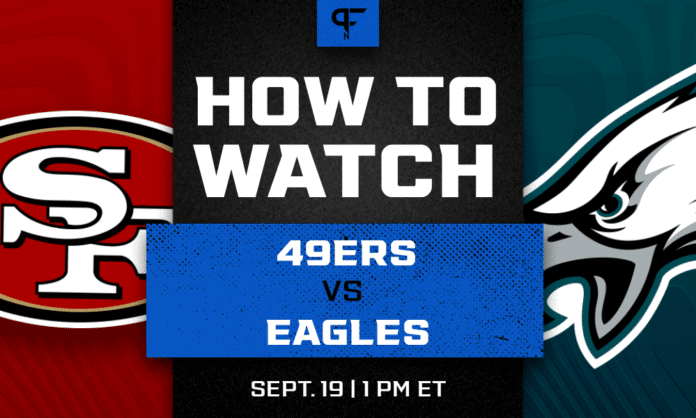 49ers vs. Eagles odds, line, prediction, and how to watch the Week 2 game

What are the latest odds and predictions ahead of the 49ers vs. Eagles matchup, and what channel can you watch the game on?

San Francisco 49ers vs. Philadelphia Eagles is a game that would not have looked out of place in the playoffs a few years ago, and after good starts to the season, both teams will be dreaming of a deep postseason run in 2021. Let’s take a look at the current NFL odds, a prediction for the game, the TV channel, and how to live stream the 49ers vs. Eagles Week 2 NFL contest.

Coming off a disappointing 2020 campaign, both the 49ers and Eagles are looking to improve, although preseason odds only projected San Francisco to do so. However, both teams won fairly convincingly in Week 1, with the 49ers fending off a late comeback attempt by the Detroit Lions.

The Eagles went into Atlanta and thoroughly dominated all aspects of the game. After two first-half field goals, the Eagles completely shut down the Falcons while scoring 32 points of their own. It was a strong start to the Nick Sirianni era in Philadelphia.

The 49ers also completely dominated — for the most part. With five minutes left in the third quarter, they led 38-10 after scoring 24 unanswered points. They then seemed to fall asleep as the Lions almost came back to force the game into overtime. While the end left a sour taste, the rest of the performance was as strong as expected.

Usually, you would raise an eyebrow at the West Coast 49ers being favored by more than 3 points on the East Coast against the Eagles. However, San Francisco is playing back-to-back weeks on the East Coast to open the season and stayed at the Greenbrier resort in West Virginia.

With their home field advantage somewhat neutralized, the Eagles will need a repeat of the performance that saw them dominate the Falcons. Yet, the 49ers have a much better roster top to bottom than the Falcons. Therefore, this will be a true test of where the Eagles are as a team in 2021.

How to watch 49ers vs. Eagles this week