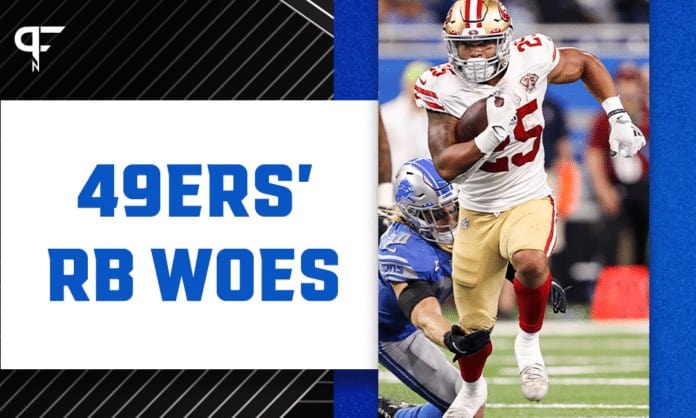 The 49ers' RB room is decimated. Where does Shanahan turn next and what is the fantasy impact for Mitchell, Hasty, Sermon, and Cannon?

The San Francisco 49ers might be 2-0, but they also have perhaps the worst running back situation in the NFL. Injuries have completely crushed the position in recent weeks, with three more 49er RBs banged up in San Fran’s win over the Philadelphia Eagles Sunday.

Week 2 starter Elijah Mitchell hurt his shoulder. JaMycal Hasty suffered a high-ankle sprain. Trey Sermon has a concussion. And all three injuries occurred during a critical stretch in the fourth quarter.

Things got so bleak that 49ers coach Shanahan was forced to play fourth-stringer Trenton Cannon, claimed off waivers just a few days prior, on offense with the game’s outcome still in doubt.

“But it was a really good job by Trenton,” Shanahan said. “He’s only been here since Wednesday and we dressed him to really help us out on special teams today. From what I saw, I think he did a hell of a job. We weren’t expecting him to go in at running back, but I think he did go in for a couple carries and just glad he knew what to do.”

Wilson’s return is still weeks away

So how did it get to the point where a Super Bowl contender has had to rely on a waiver wire pickup this early in the season?

Raheem Mostert’s season-ending knee injury in Week 1 was brutal, but the Niners’ bad luck stretches back even further. Jeff Wilson Jr. tore his meniscus in the offseason and is on the physically unable to perform list for at least another month.

Then Sunday’s triple whammy hit, leaving the availability of Sermon very much in doubt for San Francisco’s Week 3 NFC West showdown with the Cardinals. The team considers Mitchell as day-to-day. Hasty, meanwhile, will not play this week and is out “a while,” Shanahan said Tuesday.

All four backs on the 49ers’ roster were involved in the running game Sunday, but their combined output was uninspiring. Together, they rushed for 87 yards on 24 carries (3.6 average).

Shanahan, for now, has resisted the urge to sign from the pool of established veterans looking for work. But after seeing what Devonta Freeman and Latavius Murray did for the Ravens Sunday night not long after they signed with the team, perhaps that position will change.

Freeman and Murray combined for 65 yards on 11 carries in Baltimore’s dramatic win over Kansas City.

The Niners do have one established option stashed on their practice squad: Kerryon Johnson. He has 1,225 yards and 8 TDs in three NFL seasons.

The 49ers’ backfield is an infuriating situation for fantasy managers. The trio struggled on Sunday, outside of one good run by Hasty, and it is an indication of the lack of consistency we have seen for this backfield in the last 18 games.

If we go back to the start of 2020, the 49ers have rushed for 150 yards or more four times, between 100 and 150 yards eight times, and have been held to under 100 yards on six occasions. Week-to-week injuries will complicate matters and make this backfield tough to judge.

In Week 2, Mitchell was held to just 42 yards on 17 carries, adding just 11 yards on 2 receptions. With question marks heading into Week 3 over who will start at RB, knowing who to target in this backfield is challenging.

Unless we hear definitive news, Cannon is worth a speculative waiver claim. However, a big investment would be unwise if none of Mitchell, Hasty, and Sermon are ruled out for any significant length of time.