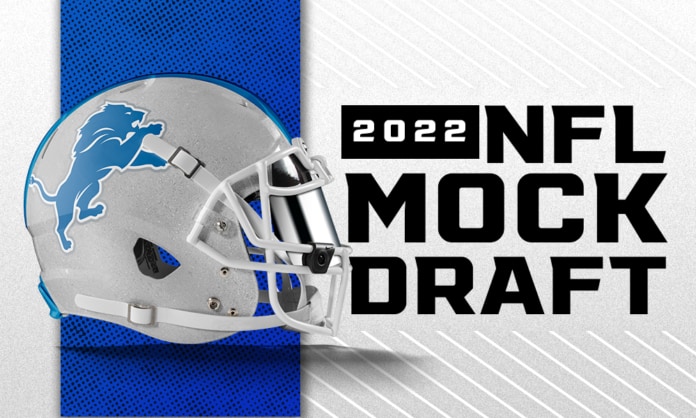 The Detroit Lions move up to secure Liberty QB Malik Willis in the latest 2022 NFL Mock Draft from our Mock Draft Simulator.

Are you already feeling frustrated with your NFL team just two weeks into the season? Are you curious about where your favorite NFL Draft prospect might land after lighting it up through the first three weeks of the college football season? There’s a solid chance that you fall into both categories. If you do, we’ve got just the thing for you. We’ve taken our Free Mock Draft Simulator for a spin to deliver a 2022 NFL Mock Draft that meets all your football needs.

Quarterbacks slide out of the top five in our latest 2022 NFL Mock Draft.

Maybe it’s Tyrod Taylor’s electric start to the NFL season. Perhaps it’s a lack of confidence in the 2022 NFL Draft quarterback class. Either way, the Houston Texans have been consistently an early-season favorite to snag a signal-caller with their first-round pick but instead select Oregon’s Kayvon Thibodeaux. The Texans land a dominant defensive playmaker, the caliber they haven’t seen since J.J. Watt was hounding teams out of Houston.

Perhaps the Detroit Lions see Jared Goff as the face of the franchise after all. Or maybe Dan Campbell has a trick up his sleeve. The Lions selected Penei Sewell last year, and in this 2022 NFL Mock Draft, they add another elite offensive line talent in Alabama’s Evan Neal. Building an impenetrable offensive line is a great way to maximize the skills of your quarterback, whoever that may be.

Not for the first time in the last week, the Jacksonville Jaguars are linked to USC. The Jaguars were one of the worst teams at getting pressure on the quarterback last season. Although they appeared to improve in Week 1, they struggled to turn that pressure into tangible results on the field. Enter Drake Jackson. The versatile pass rusher can play defensive end or outside linebacker. He’s potent in pass coverage in addition to his pass-rush prowess.

If you’re not a New York Jets fan and can name more than one of the Jets’ cornerbacks, you should consider applying next time we’re looking for an NFL analyst. Having given up the fifth-most passing yards last season, they’re desperate for a marquee name to fill the role that’s been empty since Darrelle Revis closed his island for good. Derek Stingley Jr. gives them a marquee name with elite ball skills and insane athletic ability.

If you’ve watched any college football this season, you’ll have heard Kyle Hamilton‘s name a lot. We rate the Notre Dame safety so highly that he’s the No. 1 player on our 2022 NFL Draft Big Board. If the Cincinnati Bengals come to a long-term deal with Jessie Bates III, adding Hamilton to the heart of the secondary alongside him would be unfair to other teams. If they can’t keep Bates, Hamilton is a rangy playmaker who can step into his shoes.

Currently sitting at 2-0, it would be a surprise to see the Carolina Panthers selecting from the sixth spot next April. However, with Vegas odds deciding the running order for this 2022 NFL Mock Draft, here they are. Although Sam Darnold has appeared transformed early this season, Carolina will be in the quarterback market if they select inside the top 10.

The uncertainty of the 2022 quarterback class is well summarized with Spencer Rattler‘s selection here. Three quarterbacks had already been selected by this point in the last draft cycle. Rattler has flashed incredible arm talent and creativity but is by no means a lock to be the first quarterback selected.

Darius Slay in 2020. Steven Nelson, Zech McPhearson, and Mac McCain in 2021. Kaiir Elam in 2022? The Philadelphia Eagles have attempted to upgrade their secondary in each of the last two offseasons, and it makes perfect sense for them to do so in this 2022 NFL Mock Draft. The Florida cornerback gives them a tall, long, athletic outside corner that doesn’t currently reside on their roster.

The Las Vegas Raiders have come out firing on offense to start the 2021 NFL season. Derek Carr has more passing yards in a two-game span than any QB in franchise history. Whisper it quietly, but Las Vegas’ QB looks a little like the 2016 version of himself. Imagine the Raiders’ offense with Ohio State wide receiver Chris Olave alongside Henry Ruggs III et al. That would be a terrifying proposition for every NFL defense.

Daniel Jones lives another year! Well, at least in this single-round 2022 NFL Mock Draft, he does. The New York Giants are a prime candidate for a new quarterback next April, but here they opt to retool a defense that has allowed an average of 426 yards through two games this season. Alabama linebacker Christian Harris would slide into the center of the linebacker group, providing an instant upgrade alongside Blake Martinez.

It’s time for the Atlanta Falcons to move on from Matt Ryan. To quote PFN Draft Analyst Ian Cummings: “Ryan is aging, and his contention window doesn’t line up with Atlanta’s.” They had the opportunity to snag a premier signal-caller last year but opted to secure Kyle Pitts. In Sam Howell, they land a quarterback that will be able to utilize Pitts in his prime years.

I’ve recently considered applying for a “Grecian Goliath” trademark for Purdue pass rusher George Karlaftis. In light of this 2022 NFL Mock Draft, I may have to reconsider renaming him the “Grecian Giant.” The blue half of New York has been crying out for a dominant pass-rush threat in recent years. There’s no doubting they get one in Karlaftis.

Whenever you get the opportunity to add an elite offensive lineman to your roster, you do it. The Washington Football Team snapped up Samuel Cosmi at the end of last season, and in this 2022 NFL Mock Draft, they grab Kenyon Green with the 12th overall selection. Having played guard and tackle during his Texas A&M career, he provides valuable versatility in addition to being an incredible talent.

Although watching Kyler Murray and the Cardinals outduel opposing offenses every week is fun, Arizona can help their young quarterback out by upgrading their secondary. Facing Matthew Stafford, Russell Wilson, and in the future Trey Lance twice a year requires a cornerback that can combat the aerial attack while stepping up in run support. From Clemson to the Cardinals, Andrew Booth Jr. fits the description perfectly.

Ben Roethlisberger stared into the camera immediately after the Pittsburgh Steelers’ loss to the Raiders and declared that he had to play better. The veteran QB could be replaced next year. However, in this 2022 NFL Mock Draft, the Steelers support him by adding a game-changing presence to the receiving room. Watch Treylon Burks‘ touchdown from this Saturday for evidence of what he brings to an offense.

Denver Broncos football is defensive football. The Super Bowl 50-winning team was a defensive mauler, and they’ve certainly got the pieces in place to replicate that unit. Shelby Harris and Mike Purcell are in their 30s, so an injection of youth on the defensive line might be the direction they take next year. DeMarvin Leal can dominate from any alignment on the defensive front, giving Denver a destructive force for years to come.

Offensive and defensive line consistently appear to be the most significant need for the Minnesota Vikings every time the NFL Draft rolls around. They never seem to be able to find the right players to produce at a high level. Cincinnati’s Myjai Sanders gives the Vikings an explosive and bendy pass rusher who epitomizes the pass-rush position in the modern NFL.