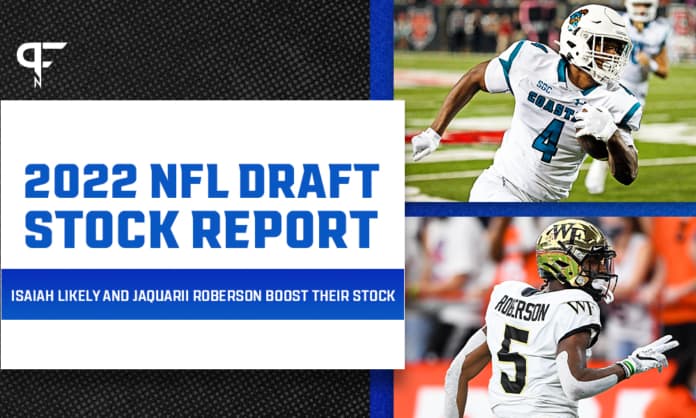 Who are this week's college football risers and sliders following Week 6? Which 2022 NFL Draft prospect's stock report changed the most?

What a week on the college football schedule! Several games with national title implications came down to the final seconds. That worked out well for Oklahoma but not so great for Alabama. On the NFL Draft front, it was an unusual week, as we have two highly rated prospects on our list of Week 6 sliders. Whose 2022 NFL Draft stock report changed the most during Week 6? Let’s dive in.

Who are this week’s risers following Week 6 of the college football season?

The Arkansas State defense looks like one you’d find in high school, but that does not tarnish the superior performance by Isaiah Likely. During Coastal’s victory over their conference foe, the tight end finished with 8 receptions for 232 yards and 4 touchdowns. Those are extraordinary numbers for a receiver — never mind a tight end.

Likely started the scoring with a 99-yard receiving touchdown where he left defenders in the dust. Likely, a player I’ve touted for nearly two years, is a receiver in a tight end’s body and comes with tremendous upside.

Since his early college days at USC, it was easy to point to Jack Jones as a legitimate next-level cornerback. He’s explosive, feisty, and possesses terrific ball skills. Inconsistency both on and off the field plagued Jones much of the past three years — but when he’s on his game, he’s really good.

Jones had an impact during Arizona State’s victory over Stanford, intercepting 1 pass and breaking up 2 more. He’s a Day 3 pick with the ability to line up in nickel and dime packages at the next level. But his off-field transgressions will be closely inspected in the lead-up to the 2022 NFL Draft.

Mississippi came away with a 52-51 victory over Arkansas in a game that included almost 1,300 yards of total offense. Ole Miss produced 324 of those yards on the ground, much of it behind the dominant blocking of Ben Brown. The big lineman devastated opponents at the line of scrimmage and at the second level. A powerful blocker who can line up at center as well as guard, Brown is a legitimate mid-round prospect.

After returning from injury, Terrel Bernard was in top form against West Virginia and looked every bit the Day 2 selection scouts believe him to be. During Baylor’s victory over the Mountaineers, Bernard led the game with 9 tackles and added 1 TFL and 1 sack. The senior is slightly undersized, but he’s a fast run-and-chase linebacker who makes plays all over the field. From a draft perspective, Bernard is a third-round pick. But his injuries — both recently and in the past — will have to be checked out at the combine.

Jaquarii Roberson was graded as a fringe late-round prospect entering the season, but he’s shown improved play in 2021. His latest outing against Syracuse resulted in a season-best 9 receptions for 135 yards. Roberson is a long receiver with solid hands and the ability to separate from defenders through routes. If he runs well before the draft, Roberson should easily end up as a Day 3 pick.

Entering the season, I graded Devonni Reed as a priority free agent despite the fact no NFL scout had the senior safety on their radar. So far this season, Reed has surprised everyone by playing like a mid-round pick. His latest performance included a game-leading 11 tackles, 1 sack, and 1 PBU in a victory over conference foe Ohio. In six games, Reed has 32 tackles, 4 PBUs, 1 INT, and a blocked kick. He has solid size, a well-rounded game, and enough ability to compete for a roster spot in the NFL.

Decobie Durant has been one of the few rays of sunshine in what’s been a dreary season at SCSU. While his team was blown out by Florida A&M this weekend, the undersized corner had a game-leading 10 tackles and added 2 PBUs. In five games, Durant has intercepted 2 passes and broken up 7 more. He’s a terrific cover corner with outstanding ball skills and a knack for the football.

During the shortened spring season earlier this year, Durant picked off 4 passes and broke up 5 more. As a sophomore in 2019, his numbers included 3 picks and 12 PBUs. Durant is fast, quick, and does a great job making plays with his back to the ball. He’s a late-round pick who can play in nickel and dime packages in the NFL.

A pair of preseason star QBs are sliding down draft boards.

After his terrific freshman campaign last year, Spencer Rattler entered the 2021 season as the Heisman Trophy favorite and was discussed as a potential first overall pick in next year’s draft. Things have not gone as planned — Rattler’s game going in reverse. After not being able to move Oklahoma’s offense or navigate a sustained drive against Texas, he was pulled from the game. There will be plenty of time and opportunity for Rattler to right his ship, but no one can deny he’s fallen well below expectations.

If there’s one highly rated quarterback playing worse than Rattler, it would be Sam Howell. His interceptions and inability to protect the ball cost the Tar Heels during Saturday’s loss to Florida State. Howell has struggled to complete 50% of his passes on several occasions this season and has not shown the ability to carry North Carolina’s offense — something you want to see from a quarterback who projects as a top pick.