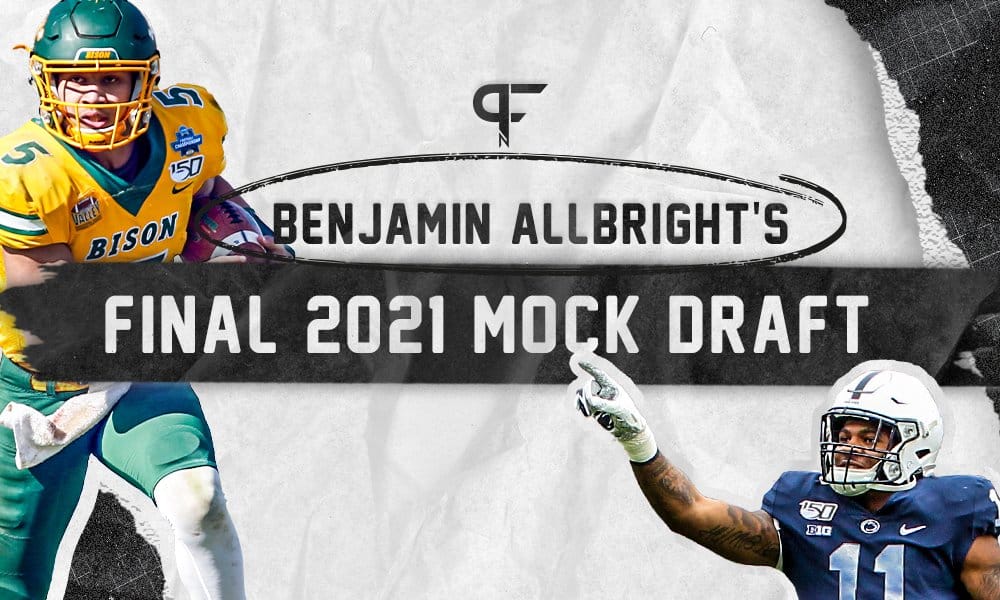 With the 2021 NFL Draft nearly here, Pro Football Network’s NFL Insider Benjamin Allbright shines some light on how he sees the first round playing out in this 1-Round 2021 NFL Mock Draft. With so many questions and intrigue surrounding this year’s event, how does he see the first round coming together? Will any teams make organization-altering trades? Will the lack of an NFL Combine impact the draft stock of some prospects?

Please note that comments on these picks have been omitted from the article. Ben provided commentary for all of these picks on his show this afternoon on KOA Colorado. The audio breakdown is available at the bottom of the article.

In partnership with Ben, revenue proceeds from this 1-Round NFL Mock Draft will be donated to the charity Paralyzed Veterans of America.

If you are looking for some of the most recent, up-to-date NFL Draft rumors and buzz, make sure to continue to follow along with Pro Football Network as NFL Chief Draft Analyst and NFL Insider Tony Pauline breaks news throughout the three-day extravaganza.

Before we get to picks 17-32, consider joining our LIVE Draft Shows in Cleveland! Want to meet PFN’s Chief Draft Analyst Tony Pauline and get all the latest news and rumors from around the league? Do you have questions to ask Dawg Pound Legends Hanford Dixon and Kevin Mack? If so, make sure to get your tickets to PFN’s exclusive two-day draft event in Cleveland, Ohio.

The top half of Benjamin Allbright’s latest 2021 NFL Mock Draft has been completed. Will we see more trades coming in the bottom half of Round 1?

Listen to Benjamin Allbright break down his mock below!