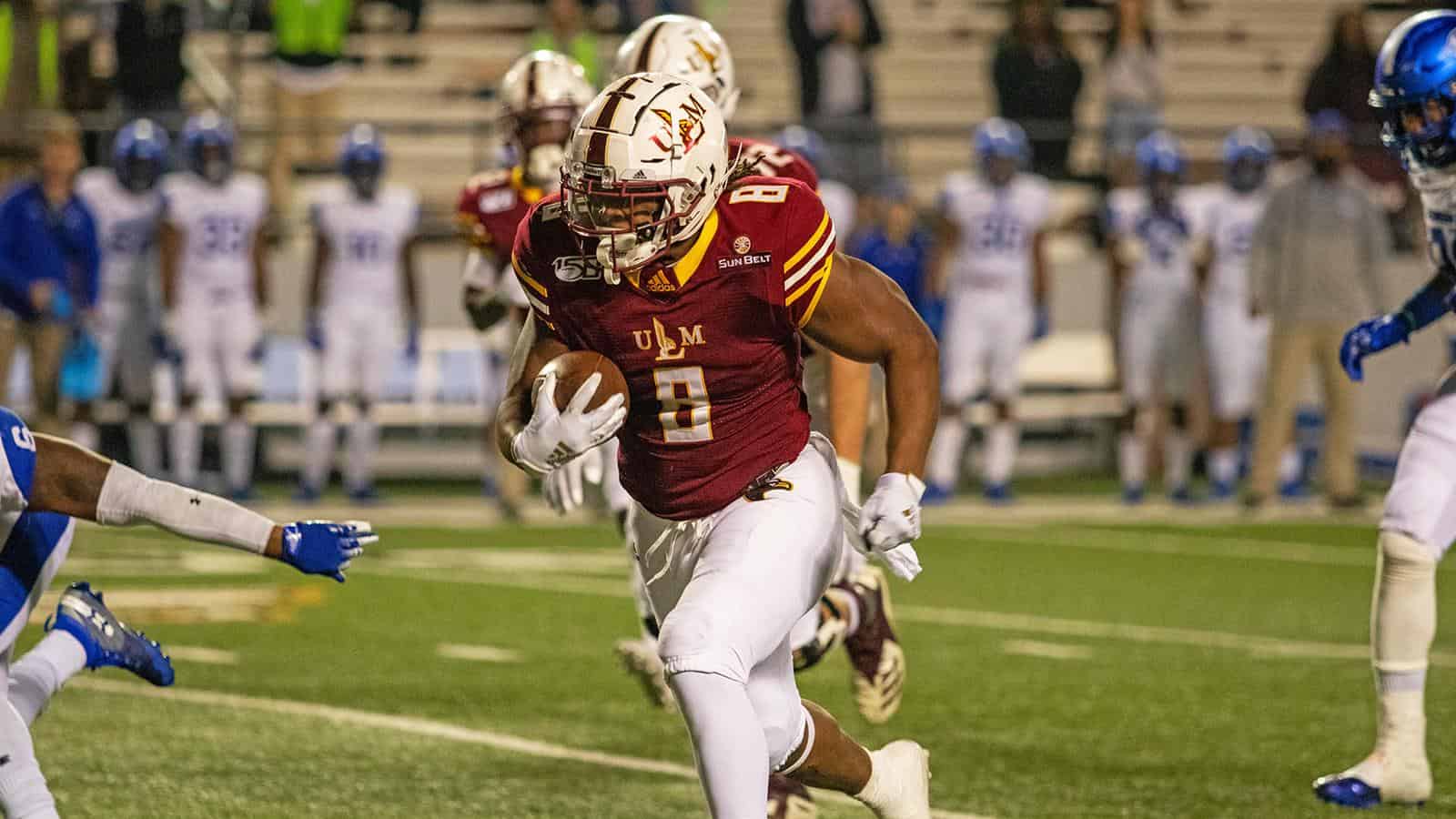 Photo Credit: ulmwarhawks.com
What's in this article? Click to show
Who is Josh Johnson?
What makes Josh Johnson a 2021 NFL Draft sleeper?
What’s holding Johnson back?

We’ve reached the middle of February and are now firmly entrenched in the NFL’s dead period. But never fear! In just a week’s time, the NFL Scouting Combine will begin, and with it signals the official start of NFL Draft season. Every class has a veritable treasure trove of sleepers, and this class is no different. But it’s never too early to start looking ahead. Enter Josh Johnson from UL-Monroe, one of our sleepers for the 2021 NFL Draft class.

This piece is going to be the first in a series of articles looking at the 2021 NFL Draft class. You’re not going to find names like Clemson’s Trevor Lawrence or Ohio State’s Justin Fields in these articles. You already know plenty about those guys — or at least you should from every “way too early” mock draft, including our 2021 NFL Mock Draft. No, these pieces are going to dive deep into the class to find the guys few others are talking about right now.

Whether it’s because they come from small schools like Johnson (University of Louisiana-Monroe), or they’re from Power 5 conference schools who have a history of being doormats, this series is going to clue you in on the guys who may go later than they should, but have the potential to be key pieces for whoever is lucky enough to land them come next April.

Our series starts off with a running back who I absolutely love for next year. This Sun Belt Conference star will only be in his second year as a full-time starter, but he’s already made a serious impression. Let’s meet our first 2021 NFL Draft sleeper, shall we?

Who is Josh Johnson?

The best running back in the 2021 NFL Draft that you haven’t heard of (yet) might just be Josh Johnson out of the University of Louisiana-Monroe. Johnson came to UL-M after spending a year in the junior college ranks. While at Coahoma Community College, Johnson finished fifth in the NJCCA in rushing yards per game, earned first-team all-state honors, and was named his team’s offensive MVP.

Johnson saw limited time in his first season with the Warhawks, appearing in only six games and totaling 66 carries on the season with only one touchdown. Last season, however, was a completely different story for the young running back. In his redshirt junior season, Johnson was finally handed the reigns, and he responded in a big way. Johnson started all 12 games for the Warhawks. He ended the season with over 1,200 rushing yards and 11 touchdowns, all while on a team that finished the season 5-7 overall and failed to receive a bowl bid.

Johnson could have declared for the 2020 NFL Draft and likely would have been a late Day 3 selection, or more likely an undrafted free agent. Instead, Johnson made the wise decision to come back to the Warhawks for one more season. With another season like last year’s, Johnson should find himself as one of the biggest sleepers of the 2021 NFL Draft class. There is a ton to like about Johnson’s tape.

Johnson may be one of the more unheralded running backs in the 2021 NFL Draft class due to coming from a middle-of-the-pack Sun Belt Conference team, but make no mistake about it, this guy can play! Johnson gives you nearly everything you want from today’s modern NFL running back.

Arguably the most impressive aspect of Johnson’s game is his running style. In an era where many running backs are looking to dance around and try to make the big highlight play, it’s refreshing to see a runner of Johnson’s nature. That is to say, a “one cut and go” type of running back.

Johnson has great vision in the backfield, and more importantly, he trusts what his eyes are telling him. Once Johnson sees a hole, he makes one cut and he hits the hole with purpose. It’s rare that you’ll see Johnson become indecisive, and it’s even rarer that you’ll see him tackled behind the line of scrimmage.

Once Johnson finds the hole, the next thing that jumps out to you is his explosiveness. When I say he’s a “one cut and go” running back, I mean this guy is fast. The main reason Johnson is so rarely brought down behind the line of scrimmage is because he has the burst to be in and out of the hole before anyone can lay a hand on him. Johnson won’t be talked about in the same breath as guys like Clemson’s Travis Etienne, but make no mistake about it, Johnson’s burst is not far off from the very elite of this class.

After Johnson finds his hole and bursts through, he again shows us the traits that will make him a sleeper in the 2021 NFL Draft class of running backs with his agility. Johnson isn’t going to be the most agile running back of the class, but he has more than enough wiggle in the open field to be held in similar regard as the top guys. His loose hips and vision allow him to shake even the most sure tacklers in the open field, helping him gain those extra yards.

It’s not all about shake-and-bake with Johnson, though. He also has more than enough power. If he can’t shake a defender in the open field, he’s more than willing to lower his pads and run through them. Johnson isn’t a running back who is scared of contact and is going to run out of bounds. Instead, he’ll lower a shoulder and pick up an extra yard or two.

Lastly, Johnson uses his power to finish off every play. I’m not sure I’ve ever seen a running back who falls forward as much as Johnson does. In all the games I watched, I can’t recall a single time Johnson was driven backward at the point of contact. NFL scouts are going to absolutely love that about him.

If Johnson is this good of an NFL Draft prospect, what is it that’s keeping him in the “2021 NFL Draft sleepers” category and not as one of the top talents available in the draft? Johnson is a prospect that I really like — he’s quickly becoming one of my early 2021 NFL Draft “crushes” — but that doesn’t mean that he’s without his faults. The biggest flaw may be a question of whether he has the ability to be a “three-down back”.

That isn’t a facet of Johnson’s game that he’s really shown thus far. Johnson only has 14 receptions in his Warhawks career for 121 yards and no touchdowns. But that’s not to say that Johnson won’t be able to see the field on third down.

What Johnson lacks in pass-catching ability, he makes up for with his ability — and willingness — in pass protection. Despite only being 5’9” and 215 pounds, Johnson is an aggressive blocker and can hold up against the best of them. Whether or not that’s enough to negate the lack of receiving production remains to be seen.

But no matter how you slice it, if Johnson keeps up the production he had last season, he could be the steal of the 2021 NFL Draft. Don’t be surprised to hear Johnson’s name called late on Day 2 or early on Day 3. Then, early and often, once the 2021 NFL season commences.