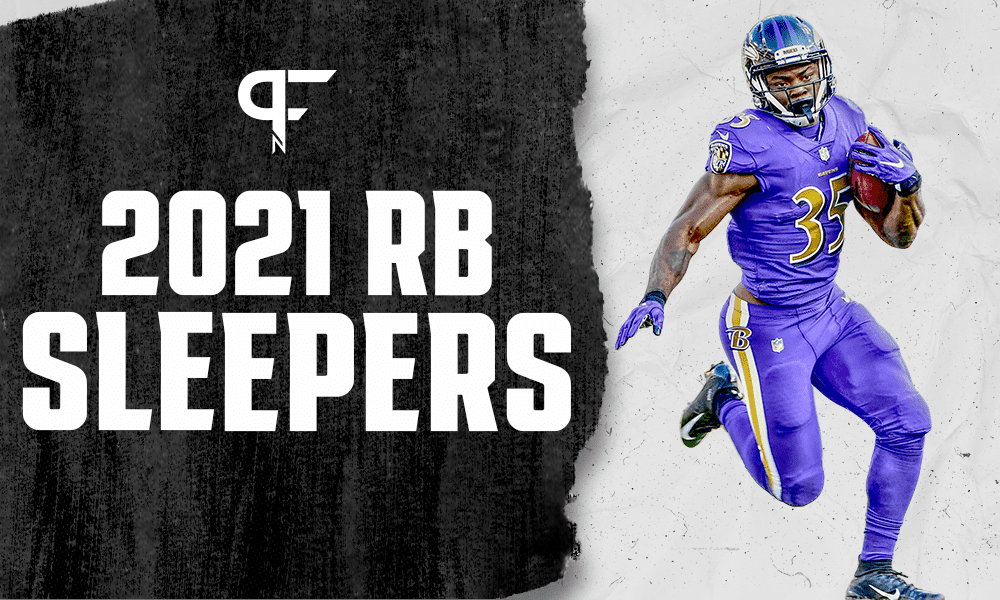 Which RBs are sleepers for fantasy football managers when it comes to 2021 drafts? Could we see a former first-round pick become good?

Which running backs from the AFC stand out as potential sleepers in 2021?

Of all the current ADPs in fantasy football drafts, Gus Edwards may be the most confusing. In 2020, the Baltimore Ravens had a total of 555 carries, with 509 of those split between four ball carriers. Of those, 72 of them were taken by Mark Ingram, who is now on the roster of the Houston Texans. The Ravens did not add a back to replace those carries from Ingram, who was largely phased out of the offense after Week 6 of the 2020 season.

In his three-year career, Edwards has played roughly the same role in Baltimore. He has had at least 133 rushing attempts in each of those seasons. Furthermore, in 2020, Edwards saw his targets increase from 9 combined in the first two years to 13 in 2020.

That development in a passing role was important for Edwards; scoring 6 touchdowns (all from inside the five-yard line) was also key. However, even when he scored just 2 touchdowns in 2018 and 2019, he still finished above RB45. Edwards’ current placement of RB47 feels like the floor for him right now, assuming he plays all 16 games once again. Therefore, drafting him at that spot has the potential for a huge amount of value.

If J.K. Dobbins were to get injured, Edwards likely sees a boost in carries. Nevertheless, Edwards could see a boost simply from the absence of Ingram. Having Edwards on your roster will be frustrating at times, but he is a back that can produce solid numbers week to week. Furthermore, the upside is massive if anything were to happen to Dobbins.

Trusting Tevin Coleman after his injury-hit season will be tough, but he has a lot of potential upside. Right now, there is no clear RB leader on the New York Jets’ depth chart. Given that Coleman played in San Francisco — in the system that Jets offensive coordinator Mike LaFleur is expected to bring to New York — he potentially has the inside track for a big role in the offense.

Coleman has demonstrated that he can be a fantasy contributor when on the field. From 2016 to 2019, he finished no worse than RB32, missing a total of just six games in those four seasons. In his first year in San Francisco, he finished at RB32, despite seeing just 137 carries and 30 targets. While there is a lot of talent in New York and LaFleur will likely use multiple backs, Coleman has the potential to get back to around 150 carries and 40 targets.

In 2016, Coleman played in a Kyle Shanahan-designed offense in Atlanta. Though he had just 118 carries and 40 targets, he finished as RB18 that season. While that was driven by the scoring of 11 touchdowns, it demonstrates that he can be a productive back on a limited number of touches. With an ADP around Round 16 in a 12-team league, there is potential for Coleman to deliver value on his draft position.

When you get to the back end of drafts in deep fantasy football leagues, you are essentially gambling on opportunities with your RB sleepers. That is what Darrynton Evans has the potential to provide. In the past two seasons, Derrick Henry has averaged 340.5 carries. Even for a back as physically impressive as Henry, that workload could take a major toll. Since 2018, he has 896 carries, which is the most in the league in that time.

Therefore, it is only logical that we are looking at a potential opportunity if he were to get injured. Evans was a third-round selection in the 2020 NFL Draft and was eased into the NFL. Using a third-round selection with Henry on the roster is a significant investment in Evans. If Henry were to get injured (or his usage was to be managed), Evans could be the beneficiary.

Which running backs from the NFC stand out as potential sleepers in 2021?

J.D. McKissic had an impressive 2020 season, seeing 110 targets for 589 receiving yards and 2 touchdowns. With questions around the health of Antonio Gibson entering the 2021 NFL season, McKissic could see an expanded role in the run game, extending beyond his niche in the passing game. Peyton Barber did not impress on 94 carries in 2020, and there is limited competition on the current Washington depth chart.

The addition of Curtis Samuel does raise some concerns for McKissic. Samuel can actually fill a similar role in terms of contributing in both the passing and rushing game. However, behind Samuel and Terry McLaurin on the roster, there are limited options at receiver. Therefore, Washington has an opportunity to use McKissic in a multi-dimensional role once again in 2021. In PPR formats, he has the potential to be extremely valuable, even if he sees a 25% drop in targets.

The 2021 season is fascinating for the Seattle Seahawks’ backfield. Chris Carson returns on a two-year deal, and Rashaad Penny is in the final year of his rookie contract, having been selected 27th overall in 2018. With the Seahawks deciding not to pick up his fifth-year option, the Seahawks need to decide his future with the franchise.

Through his first three seasons, Penny has logged just 161 carries. However, he’s had reasonably good results when he has touched the ball. Through those three seasons, he has 823 rushing yards and 5 rushing touchdowns, as well as 158 receiving yards and 1 touchdown on 23 targets. Those numbers indicate that there is potential for Penny to have success.

It would not be shocking to see the Seahawks open with a committee approach at RB in 2021. If so, Penny has the opportunity to earn more playing time if he outperforms Carson. While that is not an easy thing to do, Penny has the talent to push Carson to the fringes of the running game. Contract years can often be crucial for RBs, and Penny’s contract year provides a potential 2021 fantasy sleeper for managers.