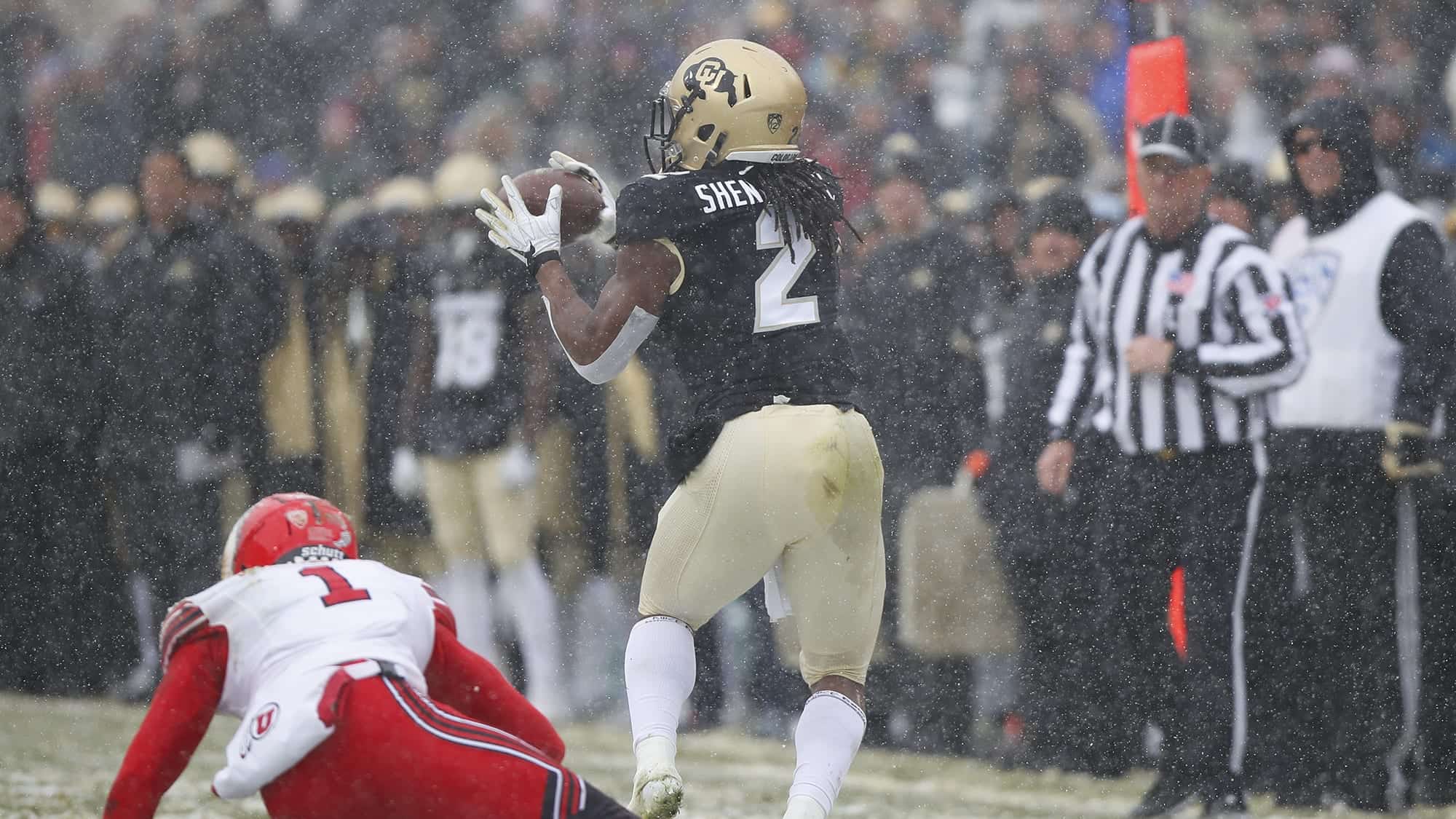 Taking college football by storm last season was none other than Colorado’s Laviska Shenault. The returning receiving yards leader from the Pac-12 was quick to put the nation on notice. In his first career start, opening week this past season, he went bananas for 211 yards and a score on ten catches. Shenault held a firm grasp as tops in the nation in receiving before missing three games towards the end of the season and is a top NFL Draft prospect for 2020.

Held out of spring practices as he rehabbed from surgery for a torn labrum, Shenault is also overcoming a toe injury. It was a taxing few weeks to close the season as he decided to play through both injuries. Regardless, he was still able to catch 26 balls during that span.

Now entering his junior season, Shenault is widely regarded as one of the best wide receivers in all of college football as well as the draft community. Whether it’s the pure athleticism, gadget capabilities, jersey number or dreadlocks, he’s drawn comparisons to Clemson Sammy Watkins. Let’s not forget, Watkins was the top receiver off the board in the historic 2014 class.

In what could shape up to be the best wide receiver class we’ve seen since then, Shenault has a strong case for WR1. Alabama’s Jerry Jeudy may have an even stronger résumé to this point, but Shenault is one of the most dynamic players in his own right and a stud NFL Draft prospect.

It’s no secret that Colorado’s Laviska Shenault is one of the most dynamic players in the country.

In all 6 games prior to missing time due to injury, he scored on a play of 25+ yards. pic.twitter.com/dDGHQRSbYd

It’s no secret Laviska Shenault is the centerpiece of Colorado’s offense. This is in large part due to his versatility within the offense and straight up playmaking ability. I mean, he did score on his first career touch after recovering a fumbled kickoff and taking it back to the house. Prior to missing games when the injuries began to pile up, Shenault scored on a play of 25+ yards in each of his first six contests.

Watching Shenault was like waiting for a ticking time bomb. Fans sit in anticipation for him to detonate with an explosive play. While they came from a variety of spots on the field, you could always rely on his ability as a deep threat. His speed releases and acceleration off the line mainly force opposing corners to play off-man coverage. However, he’s displayed nuance and detail working against press coverage.

While he jets off the line vertically, Shenault excels working horizontally as well. He has quick feet and uses a deceptive jab step to drive his opponent off-kilter. Shenault couples that with swift hands working through contact and a powerful swipe. Most prominent as a deep threat, he understands leverage and works his way behind defenses with ease.

When he doesn’t gain healthy separation, he’s proven to be a more than capable contested catcher with near elite tracking skills. Shenault isn’t your traditional deep threat in that he’s not fragile on the outside. He plays with a lot of competitive toughness and physicality which especially shows when working through contact.

Even as a runner I was pleasantly surprised by his tenacity and ability to drag defenders. He’s a reserved runner who prefers to use his 6’2”, 220-pound frame to run you over rather than make you miss.

Down one with just over a minute to play, Shenault reeled in the game winning TD working the inside fade. Again shows off his tracking ability and finishes into the end zone. Good ball here from Montez. pic.twitter.com/ob0BVO0cHj

Last season we saw Shenault terrorize opposing defenses in a variety of ways. Whether he was the H-back, toting jet sweeps, or the wildcat quarterback, he produced an impact on the game. His implementation under new head coach Mel Tucker remains to be seen as they shift towards a more pro-style offense.

The shift in the scheme should result in less manufactured touches for Shenault. However, I’d expect him to be utilized in a similar capacity at times. When you have a star like Shenault, you force him the ball. Nonetheless, the transition gives us a chance to analyze his adjustability.

Heading into the season, I’m most intrigued to see how Shenault adapts in a different role. While he’s sure to lead the team in touches, it’ll come in different ways than we’ve seen. Now we’ll get to see him run an expanded route tree with increased blocking reps.

As big of an adjustment as it might be for Viska, a lot rides on senior quarterback Steven Montez as well. We’ll see if they pick up right where they left off, or if there’s a learning curve with the new system. However, based on talent and experience, it’s fair to expect big seasons from both of these guys.

This was probably my favorite catch that I saw from Shenault.

3rd & 14: He goes full extension for the strong grab and doesn’t break stride with his eyes to the ball. Hauls it into his chest plate to secure possession. pic.twitter.com/URQSlYLo0Y

In an extremely loaded wide receiver class, it’s very likely we see a few bluechip prospects fall to day two of the NFL Draft. However, we shouldn’t be too concerned with Viska based on his early draft projections. Still, it’s imperative for these players to build off strong 2018 campaigns as they try to separate themselves in the eyes of NFL clubs. Of course, the NFL Combine will be just, if not more important.

In that aspect, Shenault is expected to impress. On film, you can tell he’s bound to light up the 40-yard dash. However, he’s not without flaws and there are some areas of his game that require more polish before the NFL Draft.

With all the manufactured touches, we didn’t get a full glimpse of what he was capable of as a route runner. Often times you saw him breaking routes off too short and not generating enough depth in the intermediate level. With the new offense, Shenault’s usage and route running are the biggest things to monitor heading into the season.

Then you have to look at his durability. While he only missed three games last season, he dealt with a combo of injuries in the second half of the season. Not a concern at this point, but certainly something to monitor moving forward. With all the Sammy Watkins comparisons, let’s not forget Watkins hasn’t played a full season since he was a rookie.

Having overcome so much adversity early on in life, Shenault has set himself out on a mission. He’s a motivated young man who carries a purpose in everything he does. With another strong season under his belt and proven durability, Shenault will become the first Colorado wide receiver drafted in the first round since Rae Carruth in 1997. Everything screams superstar with this one, and keep an eye out for him in the 2020 NFL Draft.