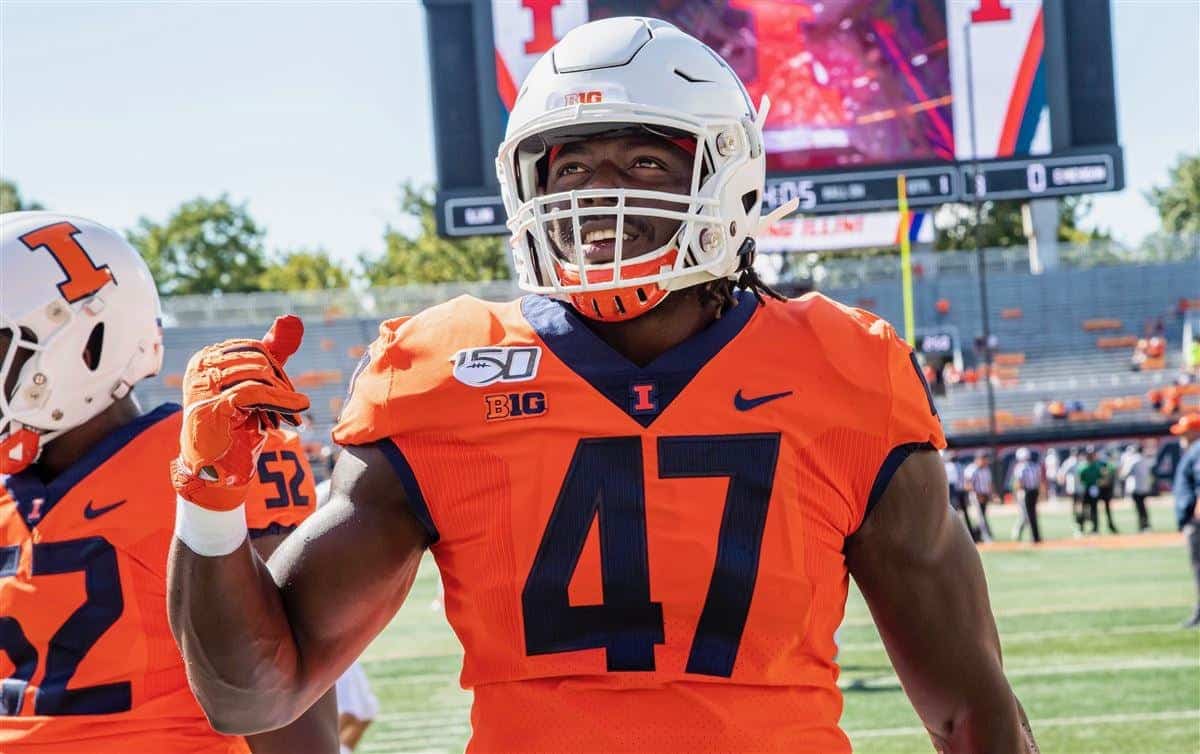 More than two dozen NFL teams were on hand for the Illinois pro day this morning to work out three underrated prospects, including one player that was snubbed from a Scouting Combine invitation.

The Detroit Lions and Chicago Bears had multiple scouts on hand while the New York Giants, Dallas Cowboys, Miami Dolphins, Carolina Panthers, and Atlanta Falcons were among the 16 teams who attended the workout.

Underclassman pass rusher Oluwole Betiku Jr, who was a surprise non-invite to the Combine, posted a 40-yard dash time of 4.62 seconds with a swift 10-yard split of 1.59 seconds. He touched 32 inches in the vertical jump and 9-foot-7 in the broad jump while his short shuttle timed 4.26 seconds and three-cone timed 7.33 seconds.

Betiku Jr, who measured 6-foot-3 and 249 pounds, did both defensive line and linebacker drills, though teams primarily project him to outside linebacker in the NFL.

Linebacker Dele Harding, who participated in the Shrine Game and measured 6-foot-0.5 and 232 pounds, had 40-yard dash times which ranged from 4.67 to 4.82 seconds. He touched 34 inches on the vertical jump and completed 27 reps on the bench.

Running back Reggie Corbin, another Shrine Game participant, tipped the scales at 206 pounds, six more than his weight from weigh-ins in St. Petersburg.

Corbin completed 20 reps on the bench and touched 38 inches on the vertical jump.

Villanova’s pro day actually took place on Friday, March 6. Teams on hand came to scout the program’s one true prospect, linebacker Drew Wiley, who was graded as a free agent before the season.

And while Wiley looked terrific in workouts, he did it as a fullback rather than a linebacker.

Wiley measured 6-foot-1, 242 pounds and timed 4.62 seconds in the 40. He looked great catching the ball and will now get consideration as a priority free agent.

I mistakenly put a tweet out there last week stating the New York Jets had their offensive line coach on hand for the Kansas pro day, which I corrected.

I can tell you this, the New York Jets are set to privately work out Kansas offensive lineman Hakeem Adeniji, as are the New Orleans Saints.

As mentioned last week, teams feel Adeniji can play any position along the offensive line except center, and as everyone knows, the Jets need help all along their offensive line, including center.