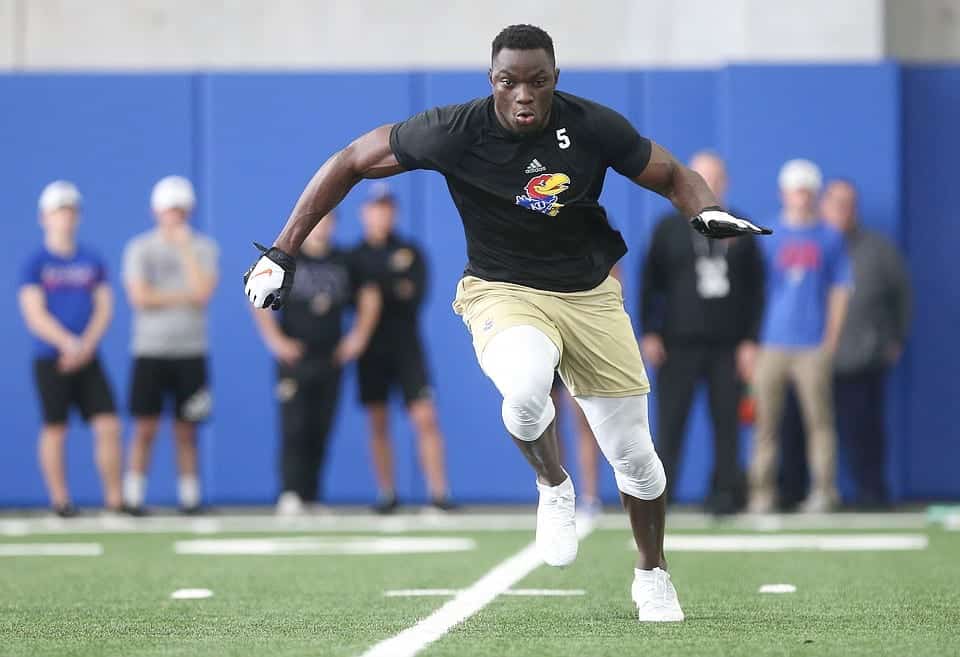 More than two dozen teams were on hand for the University of Kansas pro day today. The program has had just a single player selected in the NFL Draft the past five years. But two Jayhawks will likely be selected in Las Vegas next month.

Edge rusher/outside linebacker Azur Kamara participated in the vertical jump and improved two inches from the Scouting Combine, touching 30 inches today. While that may seem like a low mark for such an explosive athlete, it’s with good reason.

I learned Kamara suffered a severely strained hamstring during Senior Bowl week and was forced to take two weeks off after leaving Mobile. He started training for the combine just a week and a half before he left for Indianapolis, making his forty time of 4.59 seconds on Saturday night even more impressive.

Kamara completed linebacker drills and was run through defensive line drills by the Minnesota Vikings.

Hakeem Adeniji looked good during offensive line drills and scouts are excited about his upside. Depending on which team you speak with, Adeniji projects to guard or either tackle spot at the next level.

The Kansas City Chiefs are working out Adeniji tomorrow.

Twelve teams were on hand for the Jacksonville State pro day in Alabama yesterday. The top prospect that all went to see was wide receiver Josh Pearson.

Pearson measured 6-foot-3.5 inches and 203 pounds. His vertical jump was an impressive 41.5 inches with a broad jump of 10-feet-8 inches. Pearson timed 4.44 seconds in the forty, much faster than the 4.60-second receiver that scouts estimated Pearson to be coming into the season. He later posted a short shuttle time of 4.18 seconds and a three-cone mark of 7.22 seconds.

I’m told he did not drop a pass during positions drills.