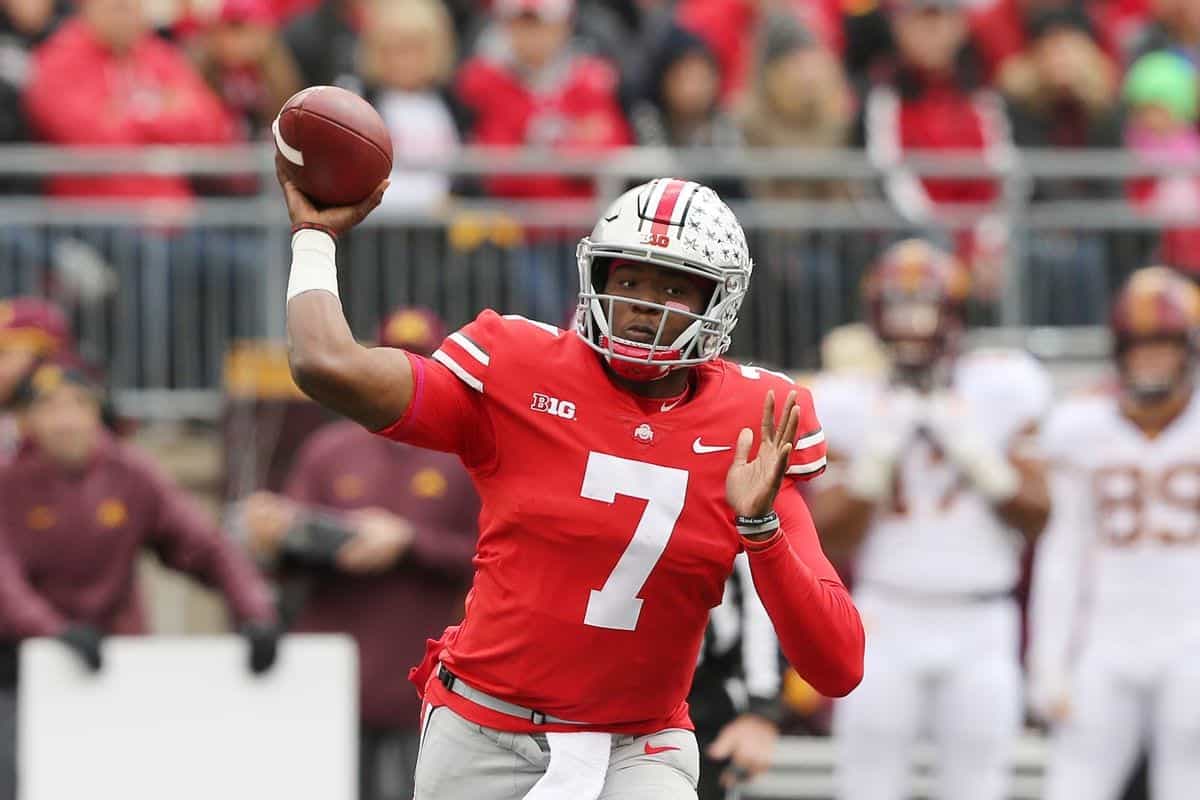 Photo Credit: USA Today
What's in this article? Click to show
The days are dwindling down to the 2019 NFL Draft. If NFL teams bypass getting a star defensive player early to fill a need or pass on the quarterbacks, they better be sure what they decide will work out.
1. Arizona Cardinals
2. San Francisco 49ers
3. New York Jets trade to the Cincinnati Bengals
4. Oakland Raiders
5. Tampa Bay Buccaneers trade to the Buffalo Bills
6. New York Giants
7. Jacksonville Jaguars
8. Detroit Lions
9. Tampa Bay via Buffalo
10. Denver Broncos

The days are dwindling down to the 2019 NFL Draft. If NFL teams bypass getting a star defensive player early to fill a need or pass on the quarterbacks, they better be sure what they decide will work out.

As seen in the previous mock draft, many teams traded up to improve their offenses. Similarly, it is known that there is always the urge to get a franchise quarterback, either where a team is currently selecting or by trading up. The 2019 NFL Draft will be no different. Quarterbacks are going to be a popular trade option this year despite it being a defensive draft early on. With that in mind, the question is this: did your favorite team get their quarterback on day one or not?

If it were any other year, there would be a case to be made for Murray not to be thought of as the first pick in the draft. Murray is a great player, but Arizona also needs a lot of help. They bypass selecting a top defensive player or trading down for who they hope is their new franchise quarterback.

San Fran continues to add to their front seven. Given Bosa’s versatility along the line and standing up, and combining with what they did in free agency, their defense will take multiple steps forward as a disruptive unit for the future.

Open for business, New York finds a trade partner in the Bengals, who realize a change is needed at quarterback sooner rather than later and pay a haul to get their guy. Despite the thought that Haskins is expected to fall in the draft, he lands in the top three. Had the Bengals not traded up, that very well could have been the case.

Double teams and more double teams are what Williams is going to see often. Oakland needs a lot as they rebuild and by selecting Williams who will be a focal point for opposing offenses will be a great selection to build around.

It does not matter where Oliver lines up; he is going to make the play. With Kyle Williams retiring, Oliver will move right in as his replacement as well as all along the defensive line. Opposing offenses, especially in the AFC East better be prepared.

New York gets a steal with Allen dropping to six. The G-Men needed an EDGE, and they get a great one. Between his athleticism, pass rushing moves, and the ability to improve dropping in coverage, there is so much for New York to like with their first first-round pick.

Jacksonville needs an upgrade at tackle, but they also need help along their defensive line. Being able to move Gary around provides more intrigue into what he could do for a team. As the best lineman available at this point, there is no need to second guess.

Detroit has had their problems with tight ends, including those drafted in the first (Brandon Pettigrew and Eric Ebron). That was the past, though, and while it would be beneficial to add more talent in their front seven on defense, the option to pass up the most complete tight end this year. Hopefully, for their sake, Hockenson provides the impact they have lacked sooner rather than later.

Tampa could have taken White at five but instead adds draft capital, runs the risk of losing him but ultimately wins. White is the most polished plug-and-play linebacker in this draft, and that is exactly what the Bucs will do.

Denver fails to get Haskins, and instead of helping out their offensive line, they go with the second most complete tight end in the draft. Adding Fant will provide their offense a big boost in terms of play-makers outside of Phillip Lindsey.

The Jets could have stayed home and selected Allen, but instead, they add to their draft capital while filling their EDGE need. That is a win-win. There is not a lot to work with in Green Bay at linebacker, but Bush is a great start to changing that. Tennessee does not get one of the top EDGEs, but they do get the top one in that second tier. With Derrick Morgan soon to be a free agent and Brian Orakpo retiring, the Titans needed to address that area in a big way. Atlanta needs to fill holes along both sides of the ball. Going with Wilkins fills one and should be an impactful player from the start.

Washington could go wide receiver, among other positions but given their tackle situation, how do the Redskins bypass a top player at that position with how the draft played out? They cannot. The speculation can finally end. We now know who is Phillip Rivers’ heir and it is Lock. Los Angeles gets their future signal-caller a year or so sooner rather than potentially a year or so too late.

Speaking of quarterbacks, yes, the Giants get their future starter too, but it may be more of a reach compared to other options they could have had the past two drafts. Minnesota has needed help along their offensive line, and my top tackle prospect heads north to solidify a dire need of theirs. Miami trades down and still gets the prospect that will help them the most along the offensive line no matter where he plays. Have you seen Pittsburgh’s secondary play? Saying it has room for improvement would be an understatement. Adding Baker should help them greatly.

Surprised it took so long for Metcalf to get drafted? You shouldn’t be. Given Seattle’s need for another wideout and pairing that with Metcalf’s potential despite his injury history, among other reasons makes that selection a logical choice. Baltimore could go wide receiver. But they need help in their interior offensive line, and there is no one better than Bradbury for the job. One of Houston’s glaring problems the last few seasons has been quality tackle play. Time will tell if McGary can resolve that issue. Philly does not need a running back, and there is depth at other areas of need so by selecting CGJ they get a versatile defensive back and in a sense a luxury pick.

Indy continues to add talent to surround Andrew Luck. With Ebron, their multiple running backs, T.Y. Hilton, and now Ridley, the Colts are clearly showing why they are on the rise. Oakland not only adds a likely CB1 in Williams but they also get a quality wideout to help replace Amari Cooper, who was traded in-season last year and Jordy Nelson. Carolina trades down and gets Ya-Sin to fall into their lap. Ya-Sin has the potential to become a top cornerback for a team.

The Chiefs have needed some secondary help (and defensive help in general) for some time now. Abram should not be the only secondary piece they add. Green Bay finally finds their long-term replacement for starter Jimmy Graham. In the meantime, Smith will be a good substitute for Graham and solid contributor when given a chance. With eight picks going into the draft, it is no surprise to see Cleveland get back into the first and add a quality piece at an area of need. New England does not rebuild; they reload. Ferrell will learn the Patriots way fast and contribute often.