Nearly two decades have passed since the New England Patriots selected Tom Brady in the 6th round. With a third of the league searching for a franchise quarterback, will the 2019 NFL Draft offer a late round gem?

Of the twelve quarterbacks selected in the 2000 NFL Draft, six came off the board before Tom Brady. In order of selection, they are Chad Pennington (1st), Giovanni Carmazzi (3rd), Chris Redman (3rd), Tee Martin (5th), Marc Bulger (6th) and Spergon Wynn (6th). The transcendent Brady wouldn’t hear his name until pick 199. Even the New England Patriots would admit Brady was a long shot. With that said, the 2000 quarterback class was underwhelming, and everyone knew it. At least that’s what they thought.

To this day, Brady continues to wrinkle the paper reports shared by scouts league-wide. If the records summarizing Brady’s NFL potential could be thrown away, who else’s could be? Two years ago he shared this message with the 2017 draft class.

“I found my combine shirt from 17 years ago and it got me thinking. This is what they said about me then….. Poor build, Skinny, Lacks great physical stature and strength, Lacks mobility and ability to avoid the rush, Lacks a really strong arm, Can’t drive the ball downfield, Does not throw a really tight spiral, System-type player who can get exposed if forced to ad lib, Gets knocked down easily”

My curiosity takes over. I find myself removing these crumpled pieces of paper from the trash. Stretching the page corners apart, I smooth out the beaten documents. The front cover becomes legible, “Thomas Brady Scouting Report”. Beneath that is page one. The list is long with a ton of red ink and heavy use of a highlighter.

Sheet after sheet feature reasons why Brady will not succeed at the next level. I continue searching. There must be something in here to explain why this guy would go on to achieve greatness. In what seemed like forever, I reach the back page. Finally, here we go. 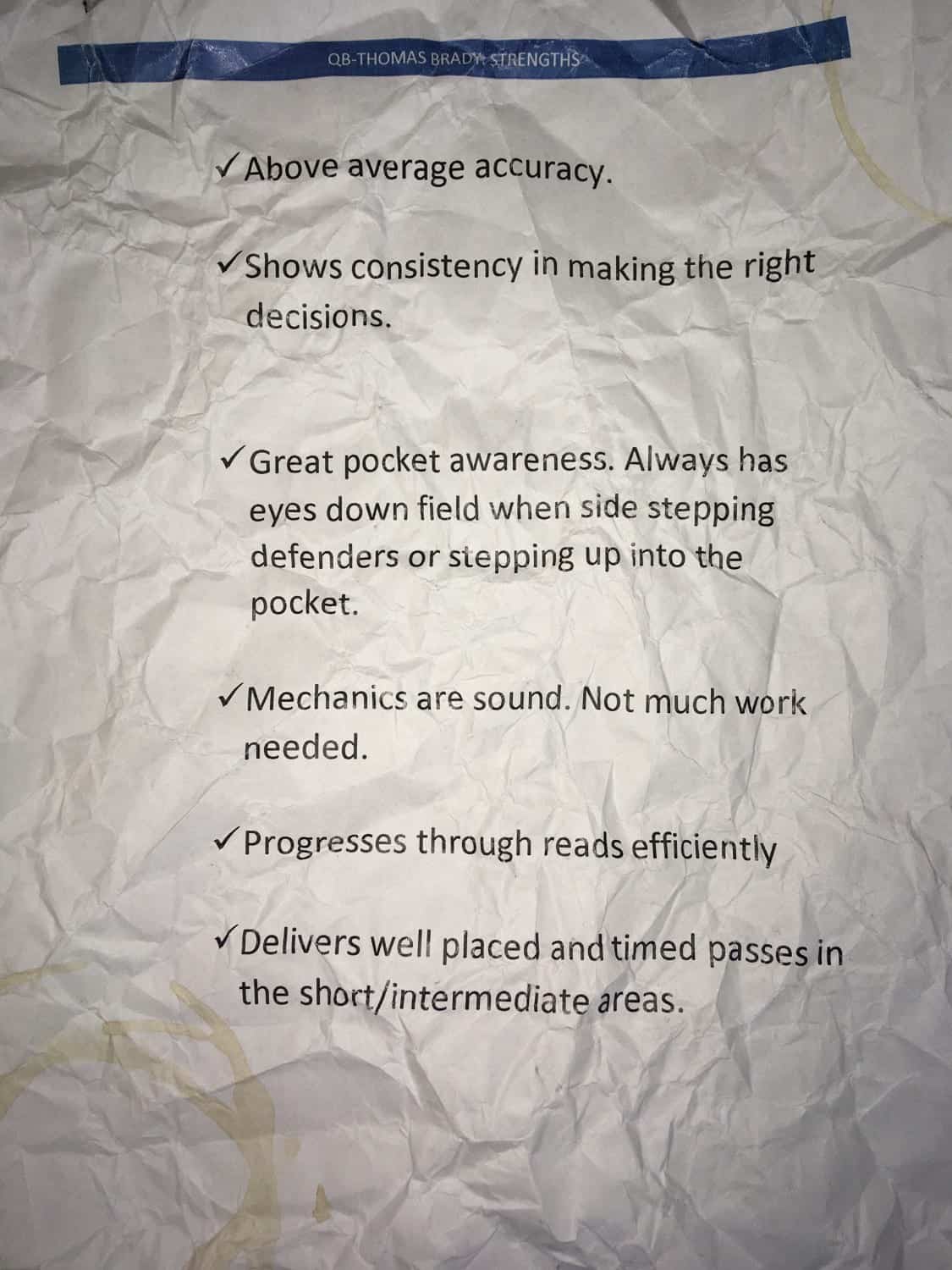 Okay, so I went a little too far. While the scouting report photo was staged, the content is accurate. In the end, Brady was best described as a quarterback who was light on measurables, but high on intangibles. So, my quest ensued. There must be a guy in the 2019 NFL Draft class who matches this criterion.

Look no further than projected 6th round pick Brett Rypien. His strengths, weaknesses, and overview on multiple sites are eerily similar to that of Brady in 2000. The above photo was taken directly from the NFL.com prospect page. Below is The Draft Network’s very own Kyle Crabbs summarizing Rypien.

Am I missing something? Rypien checks all the boxes except prototypical size, strength, and mobility. Remember, all of this was said about Brady in 2000. To clear up this coincidence, I did what any interested person would. I observed six Boise State games from 2018. Every single throw. Every single decision. What I discovered is that Rypien shouldn’t have to wait until round six of the draft. And if I were general manager of a quarterback-needy team, I assure you he’d be gone well before then.

Let’s start by highlighting the things Rypien does exceptionally well. Mechanically, Rypien is sound. Everyone has room to improve, but Rypien’s drop, setup, and release are a thing of beauty.

Of course, his mechanics won’t separate him from the other quarterbacks in this draft. If you’re looking for that one ability that sticks out, it has to be his release. I’m not sure any quarterback in the 2019 class has as quick a release.

A quarterback’s throwing motion commands reaction. If I’m a defender on a pass play, I’m watching the quarterback. By following their eyes, you can recognize where they’re looking to throw. But the start of the throwing motion gives it away. The quicker the release, the less time to recover.

Rypien is a joy to watch from an accuracy standpoint. His ability to hit his teammates in stride consistently is underappreciated. Allowing a receiver or running back to maintain their momentum after a catch can be crucial. It can be the difference between six yards and six points.

Accuracy isn’t limited to technique. Playing quarterback can be unpredictable. With that said, throwing from different platforms becomes essential. The difference between the two is that technique can be taught, while off platform accuracy is an innate skill. This is when arm strength plays a vital role. Rypien can’t launch 60-yard line drives off his back foot, but he’s perfectly capable of remaining accurate under pressure.

While it’s a small gain, checking down is part of the position. Not only was this clip an example of off-platform accuracy, but it’s indicative of sound judgment. A quarterback needs to be responsible and a reliable decision maker. You will not find Rypien forcing too many passes into a defense.

Another form of throwing off-platform would be roll out passes. Rypien is highly capable of beating teams with the play action fake in the NFL. What he does after the fake is special too.

Brady is the best at moving around in the pocket and finding an open receiver. His intention to keep his eyes downfield exudes a calmness. This is another trait that will be difficult to develop. Luckily, Rypien has great poise in the pocket and is always looking to push the ball.

It’s difficult to find college quarterbacks who can read an NFL defense. Many young signal callers are not asked to process specific information at the collegiate level. With that said, running a pro-style offense has its benefits. Rypien has experience in the shotgun and under center. On the field, it’s apparent he’s capable of going through progression reads.

As Rypien adjusts his eyes to other targets, his footwork follows. He’s smooth in changing his aiming points. He can use this to manipulate defenders as well. With his eyes, Rypien forces a favorable reaction by the defender. Watch how he capitalizes with a superbly placed pass.

Most everyone that’s evaluated Rypien will tell you he’s done some brilliant things with the football. When he’s protected, Rypien has delivered some impressive passes. Let’s continue with another pass placement example.

There is a lot to love about Rypien. He’s a four-year starter. He went 40-13 at Boise State and completed 67.3% of his passes in 2018. The statistics are pretty. Having said this, why are people so down on him? Rypien is efficient, highly productive and experienced. When it’s all said and done, he wins.

Sometimes the bad things are really bad. The weaknesses in Rypien’s game deserve further analysis. He’s not going to get any taller. At 6-foot 2, he’s tall enough especially when we’re talking about a 5-foot-10 baseball player being drafted 1st overall. His combine weight of 210 pounds will go up. Again, no one has an issue with Kyler Murray‘s weight.

Here’s where I struggle. If a quarterback isn’t a speedster but does well to maneuver in the pocket, he’s mobile enough. Can he elude the rush? Can he pick up yards in clutch moments?

Rypien took some unnecessary sacks in 2018. He’s a tough player who isn’t rattled by the activity surrounding him. Sometimes he stays in there a bit too long. Regardless, Rypien can improve on evading a closing pocket. He does deserve some credit, however. In many instances, his fluidity in the pocket allowed him time to find an outlet.

Arm talent and arm strength are not synonymous. Power is more about distance and speed. Arm talent is about variations of velocity. It’s preferred to have a quarterback with both. You want a guy who can fit a ball in tight spaces. In other instances, someone who can drop a nice touch pass over a defender. Rypien is not recognized enough for this ability.

In this next clip, Rypien scans the field left to right. He will go through all his progressions before throwing to the right sideline. With the defensive back driving on the ball, Rypien puts enough zip to get it there in time.

Against San Diego State, Rypien threw some absolute dimes in the middle of the field. In the short video below, we’ll witness him climb the pocket before delivering a strike to a receiver running a post. The defender is in a decent position, but the placement and timing are too much.

During this final example, we’ll look at Rypien’s arm talent. As discussed earlier, arm talent does not always correspond with arm strength. With that being said, it sure helps. Many scouts have determined that Rypien does not possess an NFL arm. I refute this perception. This clip shows a willingness to stand in the face of pressure, throw off-platform, and deliver a pass with incredible touch. Rypien does this while managing to lead his receiver who’s being double covered. I’m not holding the incompletion against the quarterback.

“Do not evaluate a quarterback the way you evaluate the other 21 positions. They’re playing a different sport. With a quarterback, it’s the things you can’t put down on paper that make all the difference.”

This is where front offices fumbled on Brady. Brady’s intangibles are off the chart. But there’s no actual chart to track everyone’s mental fortitude. How can you tell if someone will put in the work, be mentally tough and drive it all with an unmatched competitive nature?

You must be flexible with old preconceptions about the quarterback position. Quarterback size limitations are being thrown out the window as we speak. For years, arm strength was at the top of the list when scouting young quarterbacks. Now, accuracy is becoming paramount. Mobility in the Michael Vick sense is coveted, but general managers seek a guy that can move well and take off only when needed.

If we can learn anything from the 2000 draft, it’s that weighing a quarterback’s strengths and weaknesses deserve further attention. Since the most exceptional qualities at the position cannot be measured, why hold formulated data in such high regards.

Rypien is inherently talented. He has a natural ability that many young quarterbacks will only achieve with further development. Those around him say he’s highly intelligent and a leader of men. His production speaks for itself, and he’s remarkably experienced. He isn’t the next Patrick Mahomes or Aaron Rodgers. He isn’t going to come in on day one and save a franchise. Maybe he’s a system quarterback with lifetime backup written all over him, just like Brady.