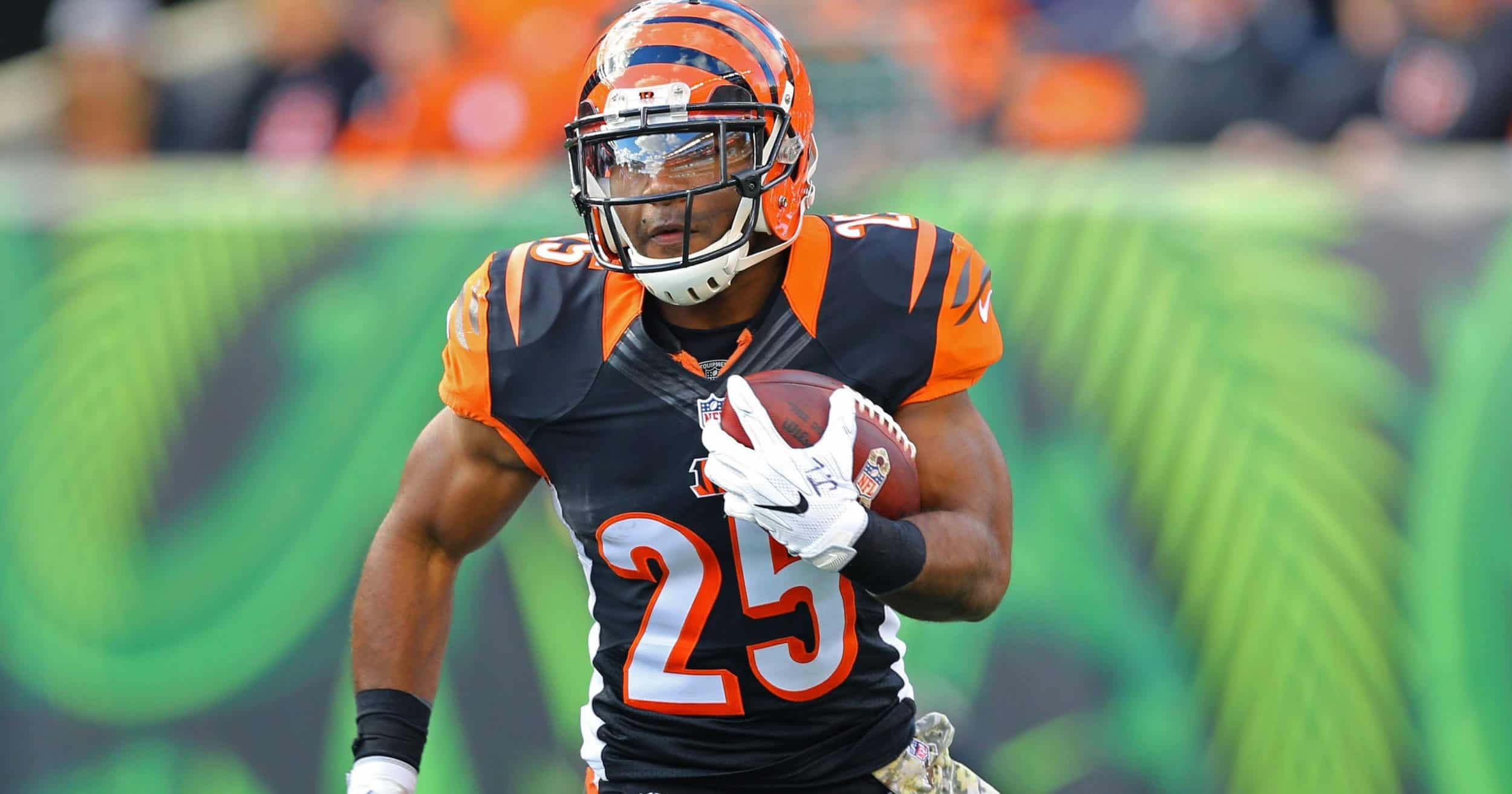 Photo Credit: USA Today
What's in this article? Click to show
Perfect timing
Help from a friend
Saving the best for last

The Cincinnati Bengals 2018 season was one to forget. Perhaps no one can tell you that more than running back Giovani Bernard. Despite starting four games, Bernard posted forgettable stats. He saw career lows in rushing attempts, rushing yards, receptions, and receiving yards. But all of that could soon change thanks to the arrival of new head coach Zac Taylor.

If the team’s spring practices are any indication, Bernard appears to be an “X” factor in Taylor’s offense. According to the team website, he lined up all over the field in multiple formations during OTA’s where Taylor began installing new offensive concepts. One minute he’s lined up in single back formation, the next he’s spread out wide as a receiver, and later in shotgun formation next to Dalton in the backfield. The Bengals offense is starting to look like an episode titled, “Where in the World is Gio Bernard?”

The timing couldn’t be better. The offensive line is in shambles after a shoulder injury ended left tackle Jonah Williams rookie season before it even started. The ground and pound approach to set up the play-action pass may have to be revised a bit based on the patchwork offensive line. Utilizing Bernard in space is one way to counteract a porous group.

Bernard is the right man for the job. Since 2013, he’s proven to be one of the league’s better pass-catching backs. In six seasons Bernard has racked up 265 receptions for 2,278 yards, an average of 44 receptions per year. In 2016, NFL.com released a list of the top-ten pass-catching backs. Bernard checked in at number eight. He’s also no slouch running the ball, amassing 3,111 rushing yards and 19 touchdowns in his career.

Help from a friend

Bernard’s backfield mate will also play a role in his career resurgence. Playing on an offense that finished 26th in total yards, Joe Mixon ran for an AFC-best 1,168 yards and caught 43 balls in just 13 starts last season. Despite being together for two years, the defensive-minded Marvin Lewis didn’t seem to understand how to best utilize the duo. Now that Lewis is gone, the shackles can come off and the Bengals can unleash a proven pair of veteran running backs in all sorts of ways.

And there have been shackles of sorts for Bernard. His tenure in Cincinnati has been a tale of two parts. In Bernard’s first three years with the Bengals, he averaged 700 yards rushing and 49 receptions per season. In the last three, he averaged 335 yards rushing and 39 receptions per year. Heading into 2019, Bernard is optimistic. According to USA Today, he likes what he sees in the new offense.

Giovani Bernard: ‘everybody is really buying in’ with Zac Taylor https://t.co/OyDt8ikzB3

Saving the best for last

As he enters a contract year, Bernard is taking a team-first approach to his new role. “We have to play for each other,” Bernard told Bengals.com. “It’s not about the stats, it’s not about how many plays I get.” Those that follow the Bengals know that’s not a surprise. Bernard has been a steady presence in the backfield through a litany of starting backs. He watched BenJarvus Green-Ellis plod through a season, Jeremy Hill fumble away a playoff win, and the arrival of a controversial yet talented kid named Joe Mixon. Through it all, he’s done what was asked of him with no complaints.

Bernard might finally be rewarded for all the selflessness he’s shown through the years. Mixon is the unquestioned starter but Taylor certainly has big plans for Bernard. Taylor also had a front-row seat in Los Angeles where workhorse running back Todd Gurley was worn down by excessive use. A committee approach featuring Mixon with a heavy dose of Bernard looks like part of the game plan in Cincinnati moving forward. And although he doesn’t seem concerned with playing time, 2019 could be Bernard’s best season yet as a multi-purpose weapon in the Bengals new offense.

Travis Yates is a writer for PFN covering the Cincinnati Bengals. He is also a co-host of the AFC North & Goal Podcast for the PFN Podcast Network. You can follow him @TheTravisYates on Twitter.