There is no bigger lottery in sports than the NFL Draft. Even a prospect that seems like a guaranteed, can’t miss talent can prove to be a bust, while the player that no team thought could make it can end up being one of the most successful players. It is always interesting to go back to a draft class with hindsight and examine what teams could have done differently, which is precisely what I’m going to do with this 2016 NFL redraft.

However, this isn’t your standard redraft.

Using Relative Athletic Score (RAS), a way of measuring a player’s athletic performance relative to their peers, the team selection is defined by the most athletic player available at the position the team initially selected. There is a stipulation that to be considered for selection, the player must have played at least one game in the NFL.

It provides a unique angle on the athleticism versus talent debate, as well as removing any character red flags that may influence a decision.

2016 NFL Redraft: How teams should have drafted according to RAS

The Los Angeles Rams selected Jared Goff with the first overall pick of the 2016 NFL Draft. If the Rams had selected purely based on athletic ability, they would have selected Carson Wentz.

Wentz has elite size and agility at the QB position, with good speed and explosion, and received a RAS of 9.62 from his performance at the 2016 NFL Combine.

Both players have led their team to the Super Bowl, and both have thrown for over 14,000 yards with similar career completion percentages. However, Wentz has been vastly more valuable to the Eagles than Goff has to the Rams using Pro Football Network’s Offensive Share Metric (OSM), with an average overall OSM of 25.89 compared to Goff’s 20.56.

The Eagles traded up to secure their franchise QB in Wentz, but in this 2016 NFL redraft, they land a quarterback with a similar athletic profile in Jeff Driskel.

With a 4.56 40 yard dash, Driskel posted elite speed combined with elite size and explosion to receive a RAS of 9.52. He was selected with the 207th selection by the San Francisco 49ers but is better known for backup stints replacing Andy Dalton and Matthew Stafford at the Cincinnati Bengals and Detroit Lions.

Driskel has put speed and explosion to use with an average 3.9 yards per carry and three touchdowns when running with the ball, a better YPC average than Wentz.

Although Ogbah didn’t run at the NFL Combine, he recorded a 4.63 40-yard dash at his Pro Day, giving him elite speed for a man of 273lbs. With impressive vertical and broad jumps, he had a great explosion grade to help contribute to a 9.34 RAS.

Ogbah has 18 career sacks and a Super Bowl ring from his time in Kansas City after being a second-round selection of the Cleveland Browns in 2016.

Ezekiel Elliott recently claimed that he has dominated the NFL since coming into the league in 2016, but he wasn’t the most athletic running back that year. That honor fell to Darius Jackson, who was selected some 212 places later by the Dallas Cowboys but becomes a first-round pick in this 2016 NFL redraft.

With a RAS of 9.86, Jackson was not only the most athletic running back but also one of the most athletic players in the whole class. He received elite speed and explosion grades after running a 4.4 40-yard dash and 6.82 3 cone drill at his Pro Day.

Jackson has just six career carries for 16 yards while Elliott has twice led the NFL in rushing yards.

The Jacksonville Jaguars are the first of multiple teams that land their original selection in this 2016 NFL redraft. Jalen Ramsey was the most athletic cornerback in the 2016 class and parlayed that into 45 passes defended, including nine interceptions, and a first-team All-Pro nod in 2017 before his relationship with the Jaguars turned sour, and he was traded to the Rams.

Ramsey has elite size at the cornerback position and combined that with elite explosion and speed to receive a RAS of 9.84.

The debate about Mitchell Schwartz and whether he is deemed elite in the NFL has brought athleticism at offensive tackle into the spotlight in recent weeks. Further evidence to fuel the argument can be found right here in this 2016 NFL redraft as the Baltimore Ravens select Jason Spriggs over Ronnie Stanley.

Spriggs, who was drafted in the second round of the 2016 NFL Draft by the Green Bay Packers, showed elite speed and explosion, combined with exceptional agility to receive a RAS of 9.78.

Although Spriggs had a solid three-year spell with the Packers before spending 2019 on IR, Stanley has gone on to be one of the highest-rated offensive tackles in the NFL despite his poor agility grade and RAS of 6.02.

The San Francisco 49ers recently traded their 2016 first-round selection, DeForest Buckner, to the Indianapolis Colts. If they’d have drafted based purely on athletic ability, then they would never have had him to trade away.

In this 2016 NFL redraft, the 49ers select Charles Tapper out of Oklahoma.

Despite having poor size at the defensive end position, Tapper received a 9.3 RAS thanks to an elite speed grade and a good explosion grade. He recorded a 4.59 40-yard dash at the NFL Combine.

After being drafted in the fourth round by the Cowboys, Tapper played just two games in Dallas and earned his only career sack in a 2017 win over the New York Giants. He was most recently with the New York Jets before being cut earlier this year.

Brandon Shell just signed a two year $11 million dollar contract with the Seattle Seahawks after spending the first four years of his career with the New York Jets. In this 2016 NFL redraft, he would have been a first-round pick of the Tennessee Titans rather than a fifth-rounder.

Shell was the second most athletic tackle in the 2016 class. He has good size for the position while recording great explosion and speed. His explosion was shown with impressive 10, and 20 yard split times despite his overall 40 time not being particularly head-turning.

The Chicago Bears climbed up two spots in the 2016 NFL Draft to snag the most athletic linebacker in the class, Leonard Floyd, and nothing changed in this 2016 NFL redraft.

Floyd was well respected coming out of Georgia, with many analysts having him rated as a Top 10 prospect and one of the best linebackers in the class. Although he suffered a hamstring injury at the NFL Combine, he still managed to put together a RAS of 9.81 across the combine and his Pro Day.

Despite being named to the 2016 NFL All-Rookie Team, Floyd has never fully lived up to the hype in Chicago and was cut by the team in the spring. He’ll line up for the Rams in 2020 after signing a one year, $10 million dollar deal.

James Bradberry was one of the Giants’ big free-agency acquisitions earlier this year, signing a three year, $45 million dollar deal. They could have drafted him instead of Eli Apple as they do here.

Bradberry was drafted in the second round of the 2016 NFL Draft by the Carolina Panthers and has 47 passes defended, including eight interceptions in his four-year career. Apple, on the other hand, has 33 passes defended with three interceptions while bouncing from New York to New Orleans and now Carolina.

Bradberry’s 9.17 RAS was helped by an elite size grade and impressive broad jump. 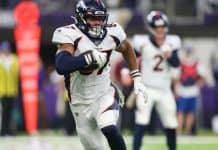 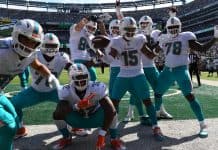 What’s left of the Dolphins’ wide receiver room in 2020? 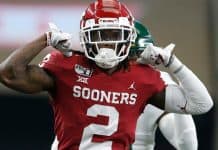 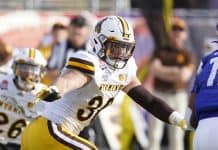 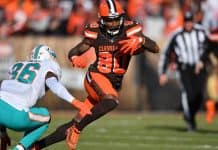