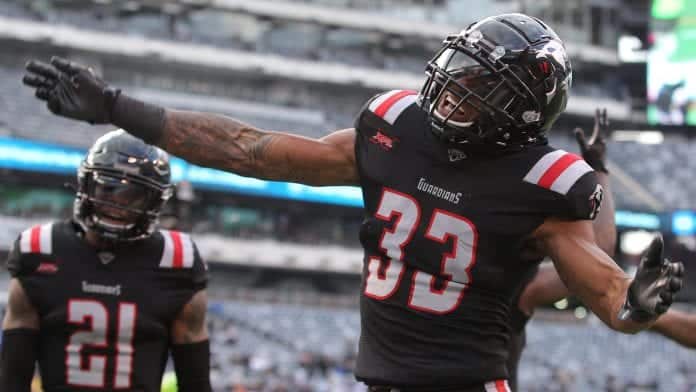 The XFL is back, and it's taking off fast. Here's a recap of Week 1 action featuring the New York Guardians and the Tampa Bay Vipers.

By Jason Sarney
February 9, 2020
What's in this article? Click to show
The Guardians were the first to put points on the board
The Vipers struggled to punch the ball into the endzone
The second half was more of the same for both the Guardians and Vipers
The Guardians were simply the better team

Sunday was day two of the XFL’s reboot and the New York Guardians defeated the Tampa Bay Vipers, 23-3 at MetLife Stadium in New Jersey. The two teams featured coaches with plenty of NFL and overall professional football experience. The Vipers have a battery of Marc Trestman at head coach and Jerry Glanville leading the defense. For the New York Guardians, Kevin Gilbride made his return to the MetLife sidelines as a coach for the first time since December 29, 2013.

Specifically, on the Guardians side, 50 of their players spent some time within an NFL organization, and their coaching staff has a combined 91 years of NFL experience as either a player, coach, or scout.

As for the home quarterback Matt McGloin, the veteran played for the Oakland Raiders from 2013-2016, and after a few stints on practice squads, has a fresh opportunity to lead a team. The Penn State alum has a unique opportunity this season to play in front of friends and family with New York. Perhaps the home crowd, family in attendance, and the joy of playing in front of his soon to be one-year-old son had McGloin firing on all cylinders in their game against the Vipers.

The Guardians were the first to put points on the board

The Guardians were able to defend their home field with a fast-paced offense and dominant defense. The game started out with plenty of action, as the Guardians received the ball first and proceeded to march down the field in eight plays in excess of five minutes. With poise in the pocket and mixed with excellent protection, McGloin completed a 4th-and-4 pass to tight end Jake Powell four plays after the opening kick and followed that up with a 3rd-and-7 conversion to wide receiver Joe Horn.

The son of the former Saints receiver of the same name was targeted eight times on the day, and his first reception set up a Tampa Bay penalty in the endzone. This led to McGloin punching in a QB sneak from the one-yard line for the Guardians’ first touchdown in team history. Running back Tim Cook III converted his run up the middle from the one-yard line to make the lead 7-0 to start the game.

On the ensuing possession, Tampa Bay countered with quick passes to their big-bodied targets, including tight end Nick Truesdell and receiver Dan Williams. Although moving through the Guardians’ defense, Murray threw an interception in the back of the endzone while targeting Truesdell. Guardians free safety Andrew Soroh made the interception, giving the ball back to McGloin and New York at their own 20-yard line.

The Vipers moved the ball here and there, but the Guardians offense came out of the gates firing, as McGloin hit wide receiver Mekale McKay for a picturesque deep pass and catch that accounted for 45 yards and set the home team up deep in the red zone at the 12-yard line. On the next play, McGloin found receiver Colby Pearson wide open following a defender losing his footing. Cook once again added a sweetener to the score to give the Guardians a 14-0 lead with 11:10 to play in the first half.

McGloin showed confidence in his receiving unit from the very first series, as he put his targets in position time and time again to make a play.

“With some of the talent we have at the wide receiver position, I’ve been comfortable with giving those guys chances to go up and make plays, giving them opportunities, and they’ve shown that,” McGloin said. “Trust is earned, and every one of those guys today earned my trust.”

As the first half clock continued to move as if it were a Royal Rumble countdown, the Vipers continued to utilize the pass to move the chains. Murray rolled outside of the pocket often to find his targets, picking on the middle of the field, which at times seemed uninhabited by home defenders.

Yardage wasn’t the initial issue, as Murray threw for 156 passing yards in the first half. However, sloppy play led to the endzone interception, as well as a reversed fumble call, in addition to a key drop on an important third-and-10 with 5:10 left in the half, as Dan Williams couldn’t reel in the perfectly timed pass near the sidelines.

The Vipers struggled to punch the ball into the endzone

The Vipers had many opportunities to score and knocked on the door after a gorgeous one-handed catch by Truesdell over the middle for 27 yards, which was followed up by a third-and-five conversion thanks to a tough catch by Reece Horn. A few plays later, Murray threw an ill-advised pass into double coverage, as cornerback Bryce Jones was gifted the interception.

The Guardians capitalized off the turnover, as McGloin hit Colby Pearson for a 32-yard pass, which set up a field goal by Matthew McCrane. McCrane split it through the uprights, which sent the Guardians into the locker room up 17-0. McGloin was very impressive leading his team, as the veteran signal-caller had a fine opening half for his XFL career, going 12-22 for 154 yards with both a passing and rushing score.

Following the abbreviated halftime of 10 minutes, the Vipers started things with a change at quarterback, as Aaron Murray seemed to be benched for Quinton Flowers, who is more of a “swiss army knife” type of player. After a few plays to open the half, Murray returned and nearly turned the ball over again via fumble.

Tampa Bay continued to be their own worst enemies, as they could not finish their drives, and the second half continued to see switching at the quarterback position between Murray and Flowers. The two were also deployed in the same sets.

With the Vipers trying anything to put points on the board, the Guardians defenders played with a bend-but-don’t-break mentality and had some key plays by strong safety A.J. Hendy. This included a play where he was able to get a hand on a potential touchdown pass from Murray, deflecting the ball to the turf. The Vipers had to settle for a 23-yard field goal by Andrew Franks, making the score 17-3 with 1:00 left in the third quarter.

The Guardians added a defensive touchdown after another Vipers miscue when a bang-bang-bang play led to a reception-hit-fumble, which resulted in a Jamar Summers return touchdown for New York. A failed one-pointer following the defensive touchdown made the score 23-3 with 11:45 left to play.

Summers did exactly what his coaches have been preaching all preseason, as he said with a smile, “As a DB room, we talk about pick-sixes and big hits.” The Orange, NJ product played minutes from his home town. As he graciously said, “it was great to play in front of my mom, my family and my fans; kudos to them coming out.”

The Guardians were simply the better team

The Guardians were able to hold off some last-minute efforts to get points on the board by the visitors, and the Vipers will fly back to Tampa with the loss. From start to finish, the Guardians were the better team, and even while running less plays and holding the ball significantly less time than their opponents, New York was much more efficient all afternoon.

Offensively, McGloin was solid, finishing the game with 15 completions on 29 attempts, 182 yards passing, and two total scores. McKay led the way with receiving yards, as he hauled in three catches for 58 yards. The Guardians’ defense was the MVP of the day, as their timely forced turnovers and hard-hitting coverage kept the Vipers uncomfortable in their own skin all game.

As the Guardians finished the game as winners, the post-game atmosphere was that of accomplishment, both amongst individuals and as a team. Whether it was McKay, or defensive stars Bryce Jones and Jamar Summers, the same words were uttered.

The trio, as well as McGloin and Gibride, had palpable relief and joy on their faces. Not only did they come away with the win, but they were also playing and working in the game they love once again, and these second and third chances are not being taken lightly.

As for coach Gilbride, his return to MetLife Stadium and football was victorious, as he graciously beamed with pride over his coaches and his staff.

“It’s a wonderful feeling when you put that much into it, and you invest so much of yourself and you come out on top,” said the Guardians coach.

With the home win, the Guardians will take a 1-0 record on the road next week when they face a fellow 1-0 team in the DC Defenders. Next up for the Vipers will be another road trip, this time taking the XFL’s longest flight from Tampa to Seattle, when they face off against another 0-1 team, the Dragons.

Something has to give in both meetings next week, and if Week 1 was any indication, Week 2 will be a slobber-knocker of a follow-up for the XFL.