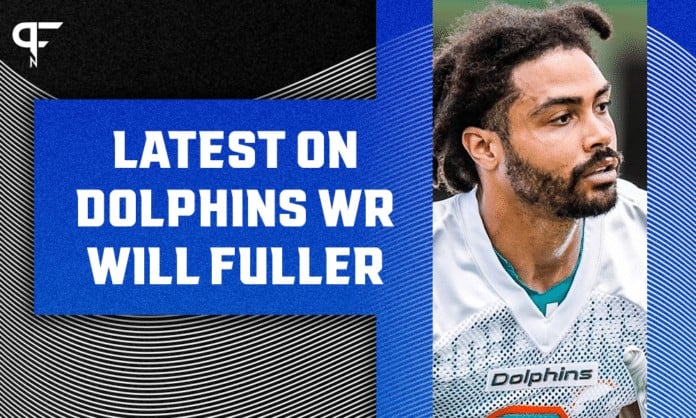 Will Fuller (personal reasons) out Sunday vs. the Buffalo Bills

With Will Fuller out Sunday due to personal reasons vs. the Bills, the Dolphins could turn to Preston Williams for the first time in months.

Wide receiver Will Fuller is out of Sunday’s Dolphins-Bills game — and perhaps beyond — as he tends to a personal matter, Miami Dolphins head coach Brian Flores announced Friday. Fuller left the team facility Thursday to deal with the undisclosed issue. It’s unclear when (or even if) he will return to the Dolphins, who signed him to a one-year contract in the offseason.

Will Fuller out Sunday vs. Buffalo Bills

“One day at a time,” Flores said during his Friday news conference. “He has my support. Things happen. When they happen, they’re not part of normal every day [circumstances], it’s a surprise from that standpoint. He’s dealing with it. We’ll support him.”

Fuller has yet to appear in a Dolphins uniform. He sat out the opener to complete a suspension for violation of the league’s performance-enhancing substances policy.

The Dolphins beat the New England Patriots in Week 1 without him Sunday, but the passing game didn’t exactly click. Tua Tagovailoa completed 16-of-27 passes for 202 yards, 1 touchdown, and 1 interception.

He really only threw to two wide receivers: DeVante Parker (who had 4 catches for 81 yards on 7 targets) and Jaylen Waddle (4 of 5 for 61 and a touchdown). Albert Wilson was the Dolphins’ No. 3 wide receiver in the game but didn’t have a catch on 2 targets.

Parker played 45 of 54 offensive snaps, Waddle 43, and Wilson 22. Mack Hollins and Jakeem Grant both played a handful of downs but were never targeted.

Bizarrely, Tagovailoa barely threw to Mike Gesicki either. The standout tight end was officially targeted 3 times, and his only catch in the opener was negated by a penalty.

The Dolphins will need more than the 17 points they scored Sunday to beat the Buffalo Bills in Week 2 on Sunday. Buffalo has won five straight games against Miami, averaging 39.4 points per game during that stretch.

Fuller’s absence could open the door for the return of Dolphins WR Preston Williams, who has not appeared in a game since suffering a significant foot injury last November.

Williams practiced fully Thursday before working on a limited basis Friday. The foot injury is healed. But he’s also dealing with a new knee issue, and that could be what keeps him out of the game. The Dolphins list him as questionable for Sunday.

While it’s unclear what Fuller is dealing with, contextual clues suggest it cropped up Thursday.

Fuller, who has 24 touchdowns and has averaged 14.9 yards per catch in his five-year NFL career, spoke with enthusiasm about making his 2021 debut some 24 hours before leaving the team.

“Just being back out there playing, helping the team win,” Fuller said. “That’s why I play the game. I like helping my team win. Whatever it takes for me to go out there and help my team win, that’s what I’m going to do.”