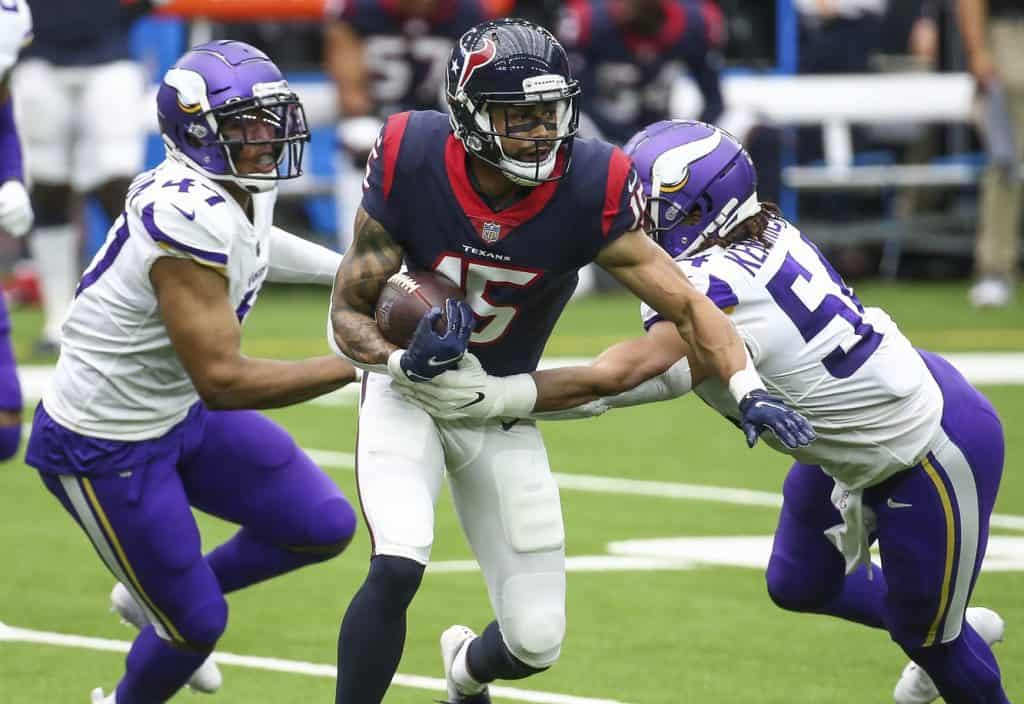 Oct 4, 2020; Houston, Texas, USA; Houston Texans wide receiver Will Fuller (15) runs the ball after a pass reception against Minnesota Vikings middle linebacker Eric Kendricks (54) during the second quarter at NRG Stadium. Mandatory Credit: Troy Taormina-USA TODAY Sports
What's in this article? Click to show
After an injury-plagued start to his career, Will Fuller enters free agency on a high note…on the field
Will a reduced salary cap impact the free agent WRs pursuing new landing spots in 2021?
As he hits free agency, where are some potential landing spots for Will Fuller in 2021?
Want more NFL news and analysis?

After having his most successful season in the NFL, Houston Texans WR Will Fuller is not looking for a new landing spot in free agency. With reports circulating that the Texans will let him walk, which teams make the most sense to sign Will Fuller in free agency?

After an injury-plagued start to his career, Will Fuller enters free agency on a high note…on the field

With Will Fuller, his talent was never in question, as we saw production bursts throughout his career. The question has been his inability to stay on the field. Since entering the league in 2016, Fuller has never played a full 16-game season. His highest total came in his rookie season when he appeared in 14 games. He followed that with 10, 7, 11, and finally, 11 again in 2020.

When on the field, Will Fuller is electric and was the deep threat of the Houston Texans for years, averaging 9.34 yards per target and 14.88 yards per reception — good enough for 13th and 14th in the NFL since 2016 (minimum 100 receptions).

Working as the second option for Deshaun Watson for years, Fuller piled up 156 receptions on 258 targets for 2,231 yards and 16 touchdowns.

2020 was a completely different season for Will Fuller. He was out of DeAndre Hopkins’ shadow following the still head-scratching trade made this time last year. Entering his contract year and free agency looming, Will Fuller needed a big season if he was going to draw the type of contract he was looking for from his new landing spot. And he did just that in his 11 games.

From Week 1 through 12, Fuller caught 53 of 75 targets for 879 yards and 8 touchdowns. He was 10th in yards and sixth in touchdowns despite ranking 20th in receptions. On the field, he had a career year. However, off-the-field choices cost Will Fuller dearly.

This all came crashing down as Fuller was suspended for PED usage by the NFL for the remainder of the season. For once, injuries were not the cause for his missed time. Due to the timing, he will also miss Week 1. His new landing spot will most certainly be aware of that caveat, and it will come up in contract negotiations in free agency for the Texans’ WR.

Due to lost revenue of the 2020 season, the NFL salary cap took a massive hit. While it has yet to be nailed down, current estimations have the salary cap at around the $185.5 million range. Earlier in the year, the NFL and NFLPA agreed on a floor of $180 million. Yet, there is a chance we see it creep close to $190 million.

Because of this, teams will be cash-strapped and have to make difficult decisions regarding veterans and how bullish they can be in free agency. However, will this keep new landing spots from giving out large contracts to free-agent WRs?

As for someone like Texans WR Will Fuller, there’s a chance he sees one of the class’ largest contracts. Spotrac has his market value estimated at $16.9 million over a four-year, $67.86 million contract. If this does happen, Will Fuller would be a top-five highest-paid wide receiver in the NFL.

However, this would mean the Texans don’t allow WR Will Fuller to hit the open market and test free agency for a new landing spot, which is still an option for the team.

As he hits free agency, where are some potential landing spots for Will Fuller in 2021?

If you are a player ready to sign a lucrative deal in free agency, getting slapped with the franchise tag is a quick way to sour relations with the organization. Luckily enough for the Texans, that wouldn’t be far from the norm anymore.

However, according to Aaron Wilson of the Houston Cornicle, it appears the Texans are going to let WR Will Fuller search for a new landing spot in free agency and not place the franchise tag on him. If the Texans do backtrack on this report, the franchise tag would cost them $16.43 million on the one-year deal. Houston currently sits 10th in cap space at $33.162 million, according to Spotrac.

Imagine: Aaron Rodgers gets help at receiver from the Packers. What a novel idea! Anytime he is not throwing to Davante Adams, you can tell Aaron Rodgers is just hoping they can hang on to the ball rather than expecting highlights.

Equanimeous St. Brown and Marquez Valdes-Scantling constantly underperform, and Will Fuller would usurp Allen Lazard as the team’s WR2 in 2021. The Packers need to win now with Rodgers in his twilight. The issue will be cap space as they are $5.84 million over the cap with numerous other problems on their team.

For Tua Tagovailoa to succeed, he needs weapons on offense. Yes, DeVante Parker has played well, but outside of him, it’s somewhat uncertain as Preston Williams can’t stay healthy.

It’s almost self-evident they address the position in the draft. That will happen with either the third overall pick, a trade back, or later on — but at some point, they are getting a receiver.

Looking at the Texans’ Will Fuller in free agency makes sense as well, due to the cap space Chris Grier has helped put the team in. After a 10-6 season in 2020, the Dolphins enter the 2021 offseason with $36.64 million (eighth-most in the NFL).

The New England Patriots have the worst skill group in the NFL right now. N’Keal Harry has been a bust; Julian Edleman is 34 and struggles to stay on the field. To top it off, their top WR in 2020 was a UDFA from NC State (Jakobi Meyers).

The Patriots desperately need help at receiver if they will even attempt to retake the crown from the Buffalo Bills. Sitting with the third-most cap space ($72.619 million), the offense needs a complete overhaul.

If Will Fuller does choose New England as the landing spot, he’d instantly be the favorite target of whoever is QB.